From the ashes of past bands comes today’s Disinformants, ready for the Blowout 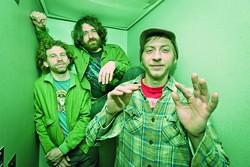 From the outside, the choices made by musicians can appear baffling. Take Anthony Gentile, formerly of the Jehovah’s Witness Protection Program. That duo worked its four collective butt cheeks off for years, scrapping and scratching its way up the local underground rock ladder. Just as it appeared they were catching the eye of people outside of their established niche audience, they packed it all in, called it a day, fucked off.

In 2011, Gentile and friends from bands like Err and Sharkey & the Habit formed what was initially a Jesus Lizard tribute band called Lizzerrd. The guys had so much fun that they started writing their own songs and playing out more. They even started to grab a few fans in the process. Of course, about a year later, they shit the proverbial bed too.

So one has to wonder, what inspires a musician to toil and bust his ass, pouring blood, sweat and beers into a band, and then leave it all behind, seemingly in the blink of an eye? To us outsiders, the concept seems unfathomable. But Gentile isn’t the first and he won’t be the last. However, the music of the Disinformants offers a little insight. You see, Gentile is an artist and, as such, he gets bored quickly. He’s always striving for new challenges, new aural frontiers to wrap his hairy arms around. This band gives him that very thing.

The Disinformants formed in May of last year and is composed of Gentile on guitar and vocals, Jheremie Jaque (of Zombie Jesus & the Chocolate Sunshine Band) on bass, and Larry Johnson (of Err) on drums. “Those guys both played with me in Lizzerrd,” Gentile says. “This was out of the ashes of Lizzerrd. It’s quite a different thing though. It doesn’t really sound anything like Lizerrd at all.”

When speaking with Gentile, a man who exudes gentle contentment the way a fat man sweats, you can’t help but feel that the idea of one of his bands sounding like another one of his bands fills him with dread. That is the very antithesis of what he’s about. So, on that note, what the fuck happened with JWPP? “We’re done,” Gentile says. “We’re not playing at all anymore. Both Lizzerd and JWPP imploded literally around Blowout of last year. Shortly after that, Jehan (Dough, JWPP drummer) and I played the last show the week before Blowout and Lizzerd played the last show in April. That’s when the three of us got together. Me and Larry played on and off a lot. When JWPP broke up, he and I started jamming and thought it may be a two-piece but it just made sense to have Jheremie play with us. We both wanted to do something different, and we’d played in two-pieces for so long. Jheremie was really excited about Lizzerd, and we wanted to keep him with us after that exploded.”

With the Disinformants, Gentile brought bandmates over from Lizzerd and, as he did in JWPP, he loops his guitar. For the most part, that’s where the similarities end. “It’s still me playing guitar, I do still loop my guitar and I still sing like I sing,” he says. “Having a bass player in this band, Jheremie, really contributes a lot of the ideas for the songs. The songs aren’t as rigid and forced as some of the JWPP stuff was. I’m getting to play guitar … quite a bit more painting than drawing. With Jheremie coming up with a lot of the initial grooves and bass lines, it allows me to go out there a little further with my guitar rather than just be forced to play the structure of the song like I was in JWPP. It gives it a greater sonic quality and really allows me to develop the songs. They’re a little bit more thought-out, more developed and composed than what we were doing before. A lot of the same energy but a little bit better harnessed. More balance between the chaos and the song.”

This year, the Disinformants will play their first Blowout festival, though Gentile and his bandmates have played the event before with their other groups. The singer is psyched. “This year having a new band, I was just really hoping to be able to play Blowout because it’s just such an institution for Detroit music,” he says. “I do a lot of traveling for fun and for work and no matter where I go I seek out live music, and I know that the live music community that we have in the Detroit area is really strong. There are a lot of really good bands. Ourselves not truly being a Detroit band because we’re over here in Ypsilanti, it’s nice to be able to be a part of it because it’s a chance to represent our city and it acknowledges that the people putting it on know that we’re doing something right now. Hopefully it works musically as well. We love it. Every year I look forward to it. I always loved going before I was ever in bands. JWPP was the first band that I played the Blowout with. We played four years and had a blast every time. I hadn’t even heard of the Pretty Ghouls [playing with the Disinformants at Blowout] but as soon as I looked them up I realized we had a lot of the same mutual friends. What they’re doing is awesome and exciting so it’s cool to get paired with a band like that. Blowout is usually an opportunity to play with bands that we maybe didn’t know, but also meet bands and people that we get to become good friends with.”

The Disinformants have an EP coming out this month, and Gentile says that the lion’s share of the Blowout set will be pulled from that, with a few newer tunes thrown in too. “We’ll have a couple of new songs prepared for our set and just have the best time possible,” he says. “Check out as many bands as possible. There are a lot of great bands in Detroit. I’m sure there’ll be great bands playing at the same time we play that we won’t be able to catch. I’m really looking forward to it. I’m excited to see how the split city thing goes this year [with Ferndale]. I know it’s caused some controversy, but I’m on the side that I hope things go well and it’s really good. I’m glad that we’re playing Hamtramck this year though because I just love playing as close to Detroit as possible, but I will be out at the Ferndale shows as well. I expect that it’s going to be a great festival, both weekends. In music and in life, I appreciate tradition but I also appreciate moving forward. Blowout’s doing that this year. With this band, we’re appreciating who we are, where we’ve come from, the bands we’ve been in and the people we played with, but always trying to take it one step further and get one step better which makes it one step more fun for us.”

To conclude, Gentile describes the Disinformants live experience as, “Chaotic, intense yet still balanced with control and nuance.”

Then he ends with, “But we’re ready to slap you if you’re not paying attention.”

We don’t doubt it.

Brett Callwood is a staff writer for Metro Times.  Send comments to him at letters@metrotimes.com