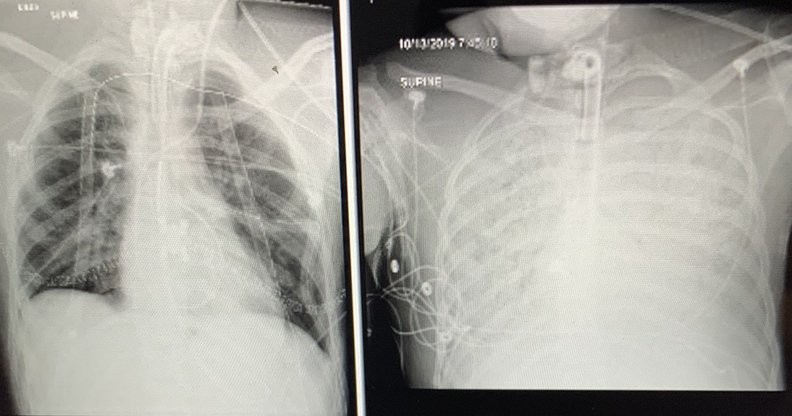 Doctors at Henry Ford Hospital in Detroit delivered a strong but confusing message to the public on Tuesday after performing a rare double-lung transplant on a Michigan teenager: Vaping is "evil."

"Vaping-related injuries are all too common these days. Our adolescents are faced with a crisis," Lisa Allenspach, M.D., the medical director of Henry Ford's Lung Transplant Program, told the media. "These vaping products should not be used in any fashion."

But there’s one significant problem: The doctors refused to say what exactly the patient had been vaping. So how does the public know what to avoid?

There are two very different kinds of vaping – nicotine and cannabis, or marijuana. Gov. Gretchen Whitmer has targeted flavored nicotine vaping products, and became one of the first governors to call for their ban, citing a rise of teen vaping. But cannabis vaping has been linked to a spate of deadly injuries that have killed 40 people and sickened more than 2,000 others. On Friday, the Centers for Disease Control and Prevention identified vitamin E acetate — a popular additive in black market cannabis vape cartridges — as a "very strong culprit" behind the lung injuries.

There has been no evidence that nicotine vaping is related to the outbreak.

No one is saying nicotine vaping is safe. But most health experts agree that it is far safer than cigarettes, which kill one of every two longterm smokers. Vaping has become a popular and effective way for people to quit smoking cigarettes.

“By failing to disclose the product that is responsible, the Henry Ford Medical Center is not contributing in any meaningful way to the prevention of this outbreak,” Dr. Michael Siegel, a professor of community health services at Boston University, tells Metro Times. “If anything, they are making it worse by confusing the public into believing that e-cigarette use is causing respiratory failure, as opposed to THC vape carts, and I believe that is irresponsible.”

"This is an evil I haven't faced before,” Nemeh told reporters, who dutifully spread the message. “The damage that these vapes do to people's lungs is irreversible. Please think of that — and tell your children to think of that."

The vitamin E acetate identified by the CDC is used to "cut" or dilute cannabis oil in vape cartridges to maximize profits in the black market. Nicotine vape liquid, which has been on the mass market for more than a decade, generally has two ingredients, vegetable glycerine and propylene — neither of which has been implicated in the outbreak.

The family of the teenager also clouded the issue in a message to the media:

"We asked Henry Ford doctors to share that the horrific life-threatening effects of vaping are very real! Our family could never have imagined being at the center of the largest adolescent public health crisis to face our country in decades."

"Within a very short period of time, our lives have been forever changed. He has gone from the typical life of a perfectly healthy 16-year-old athlete — attending high school, hanging out with friends, sailing and playing video games — to waking up intubated and with two new lungs, facing a long and painful recovery process as he struggles to regain his strength and mobility, which has been severely impacted."


Gregory Conley, president of the American Vaping Association, said the press conference added to the confusion about vaping.

"While the doctors involved deserve kudos for successfully performing this lifesaving transplant, the hospital’s public relations team should be ashamed of themselves for spreading doubt to America’s 36 million adult smokers and their families,” Conley tells Metro Times. “These are real lives that they’re playing with by not being forthcoming about what the unnamed teenager was vaping."

A poll released in September found that 58 percent of Americans believed vaping nicotine has caused deaths from lung illnesses, while only 34 percent thought cannabis vaping was the cause.