Old-school bodybuilder fought the FDA and the FDA won 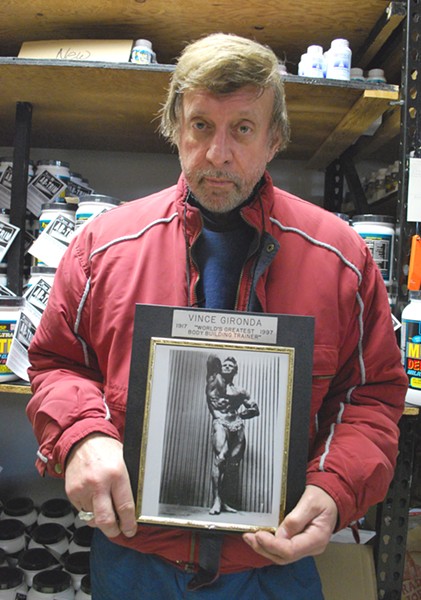 It's not the same anymore for Ron Kosloff. Not since they came after him, ruined his livelihood, broke his spirit.

They are the Food and Drug Administration. And several years back, they paid him a series of unpleasant visits from which Kosloff still hasn't recovered, financially or emotionally. Suddenly he pauses and says nervously, "Please don't get me in trouble."

Kosloff, 72, is gentle and soft-spoken, a big man with a graceful walk. He's owned Research Nutrition on Seven Mile near Hayes on the city's east side since 1974, selling products based on what he calls "old-time bodybuilding," the workouts and diets that were made famous in the 1940s and '50s by fitness icon Vince Gironda, Kosloff's idol.

The store sells oddities like dried bee pollen and glandular extracts, and chlorine shower filters, and reprinted pamphlets describing years-old exercise techniques. Kosloff's against most prescription drugs and believes good nutrition can prevent or cure most physical ailments. Diabetics come to him for pancreas extracts, and alcoholics come to him for liver pills. Both believe the supplements will regenerate their poor, punished organs.

The store is nestled in a small strip of storefronts, hard to spot if you're not looking for it. Open the front door and you're in a tiny, dim lobby with a small counter. The nutrition products he sells are stacked in a storeroom in the back. There's no showroom to browse. Most of his sales nowadays are by mail anyway, ordered online.

Kosloff admits he's an eccentric. "I'm a little bit different," he says. He detests sugar and iodized salt and says fiber is actually bad for you. He thinks all pro athletes are on steroids. And he doesn't believe in calorie counting. Or calories, for that matter.

It's a recurring theme with him. Madison Avenue and big corporations, he insists, have brainwashed us, told us to eat carbs and drink sugary pop and kill ourselves just to make themselves rich. They're against nutrition and vitamins because they need us to be sick so we'll have to pay costly visits to the pharmacy.

"The medical profession spends zillions of dollars every day hawking drugs," he says. "They don't want to talk about the holistic way. They want to talk about drugs. It's only the intellectual who's going to say, 'This is not right.'"

Kosloff's the author of dozens of articles espousing these convictions. They're on his store's website, with titles like "Grains: the Great Coverup of an Insidious Sickness," and "The Coming Conspiracy of a Planned Pharmaceutical Menace." The FDA was one of his favorite targets.

Little did he know when he wrote those things that the FDA would one day show up at his door.

Kosloff grew up scrawny and took up bodybuilding to change that.

"I was skinny and I didn't have that much going for me," he says. "I just wanted to look better, just so people wouldn't pick on me, and naturally if a girl looks your way that's a little helpful."

And that's when he first set eyes on Vince Gironda. Back in the 1950s and '60s, Gironda was an iconic bodybuilder. He'd operated the famous Vince's Gym in Hollywood since just after World War II. Movie stars flocked to him for training. They called him "the Iron Guru."

Gironda was unorthodox and became more so as his life went on. He was opposed to training abdominal muscles at all. He drank raw milk and suggested eating three-dozen fertile hen eggs every day. He claimed kelp pills help increase muscle definition. But mostly he preached against steroids. The natural way, he declared, is the only way.

He was temperamental, and would suddenly throw someone out of his gym if he thought they were doing an exercise incorrectly. When a young Arnold Schwarzenegger visited him, Gironda told him he was a "fat fuck" just because he hated arrogant celebrities.

Kosloff was so impressed by Gironda he got him on the phone, made an appointment to see him, flew from Detroit out to California and wound up staying there for six weeks for one-on-one training. They became lifelong friends.

But in the '80s, modern fitness centers sprouted up everywhere, and suddenly Vince's Gym seemed old-fashioned. It closed in the '90s, and Gironda died a broke and broken man, soothing himself with the bottle until his last days.

Kosloff still looks up to him, even in death. There are photos of Gironda, posing or flexing, framed and hung on the walls throughout his store. Gironda's pamphlets on diets and workouts are neatly arranged on display at the front counter. And when Kosloff speaks of him, his tone is flush with affection.

"Nobody had definition like he did. I mean, he was just a phenomenal man. If you read those articles that I wrote about him you'll see what a great, great man he was."

Today Kosloff is the keeper of Gironda's legacy. He sells his workout courses, lives his advice, sells the products his mentor helped formulate. His answering machine fills every day with calls from such places as Hawaii and Delaware, England and Canada.

"It's still a cult," he says. "All the people that call me, they embrace Vince Gironda, they embrace old-time bodybuilding. But he was attacked viciously for the things he preached." �

In a way, he likes to note, he's now suffered the same unfair fate as his hero.

The infant formula in the stores offers poor nutrition, Kosloff says. "Babies are being fed garbage." So eight years ago, he came up with his own blend, packaged it and sold it.

Kosloff says he heard that a woman found his formula on a local health food store's shelf, fed it to her baby, and was so impressed by the results that she went to her doctor and cheerfully told him all about this new product, adding that she wasn't coming back for the doctor's own treatments for the baby's digestive problems. The doctor called the FDA. And the agency brought the hammer down.

In early 2004, a warning letter became a phone call that became a knock on the door, and Kosloff soon found himself pouring out can after can of his formula under their watchful gaze. He lost a fortune.

"It was devastating," Kosloff says, his eyes welling with tears. He would've retired by now, he says, if it weren't for the financial hit he took.

The agency never said his formula was harmful, only that he didn't notify them about his new product, and that he mislabeled it as food rather than merely a dietary supplement.

Patricia El-Hinnawy, FDA public affairs officer, acknowledged the agency's actions against Kosloff but would only note that, in general, "FDA can recall infant formula if it determines that the product is adulterated or misbranded and therefore presents a risk to human health."

So Kosloff fell back to selling his liver pills and enzymes, taking phone calls from faraway gyms, counseling people on what they eat, keeping a low profile.

But it's just not the same. He sits in his chair with a slump of defeat, his voice a sleepy whisper, his face that of a man looking over his shoulder.

"These aren't good times," he says. "I'm just carrying on. See, you don't fight big corporations. I realized what power was." He's convinced the FDA will come after him if he talks about this. Still, he talks anyway.

He has a picture of himself standing arm-in-arm with his idol on a cloudy day long ago. It shows two men tied through the years by their shared beliefs, the feeling of being alone in their truth, and the sense that you just can't fight the power.

"I'm just another Vince Gironda," Kosloff says. "You tell the truth, and they'll get you. The truth in America doesn't fly. Everything is just bullshit. It's sad."