A 64-foot-long, fire-breathing dragon is just one of the draws at Maker Faire. 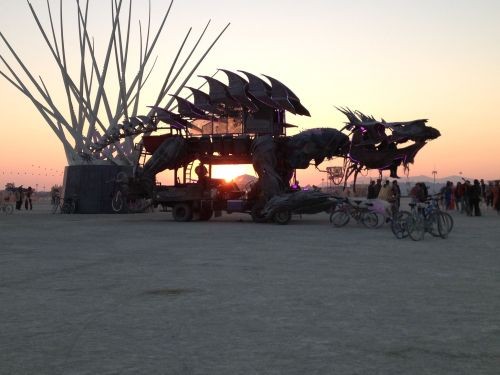 This week, visitors to Maker Faire in Dearborn will be able to witness an 8-ton fire-breathing dragon. The beast is 22-1/2 feet tall and more than 60 feet long. It’s an “art car,” built onto the frame of an old Dodge W-300 Power Wagon with a 318 engine. There’s a 1,500-pound second-story DJ booth encased in steel wicker, mounted on a Marine Zodiac attack boat under the monster’s spine. The whole contraption can carry more than a dozen riders, with seats in the mouth and in a party couch on the back, where riders can make the tail sway back and forth. Hydraulic systems bring the front of it to life, and the driver can use a fire system to shoot flames from the fearsome creature’s mouth.

The creation, called Gon Kirin, is the work of artist and fabricator Ryan C. Doyle and artist Teddy Lo. It was featured on the cover of Metro Times a few years ago, when Doyle and company first chose Detroit as their home base. It was a big hit at last year’s Maker Faire, and this July 27-28, the dragon will return to the fair, held on the grounds of Dearborn’s Henry Ford, for a third and final appearance.

But Gon Kirin is just one of the spectacles at Maker Faire Detroit, which have included a moped racing course, a home-made windmill that produces electricity, a life-size version of the game Mouse Trap, as well as thousands of other, smaller artistic contributions from tech geeks to crafters on display throughout the event. The theme, roughly stated, is “making stuff,” and a surprisingly broad group of people fall under that category from fabricators and welders to knitters and woodworkers, some more irreverent than others. Not all of the items on display will be massive or pretentious, and quite a few will be for sale, so come with a bit of shopping cash to gather some of the most unusual gifts you’ll find.