The director says ‘Cut’ and really means it? 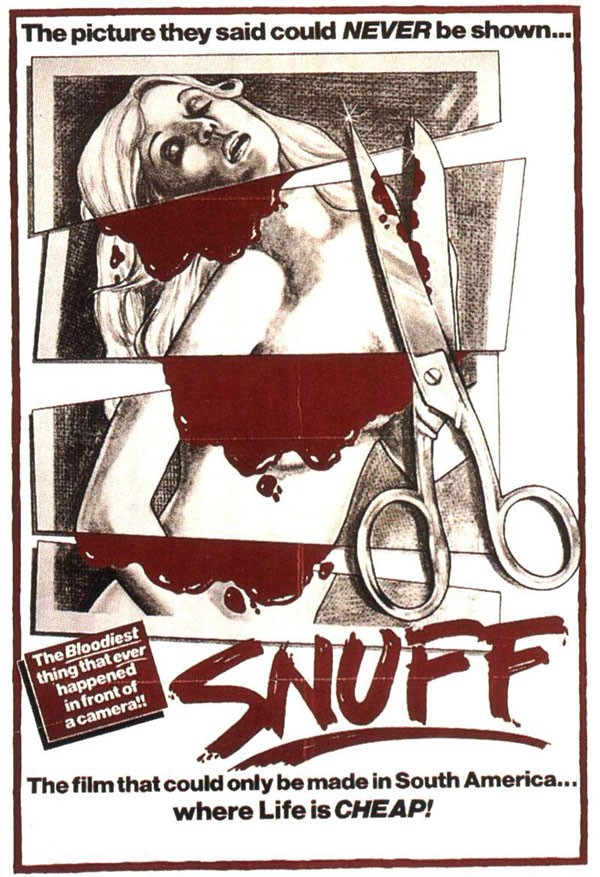 DVD distributor Blue Underground specializes in exploitation cinema — the gloriously awful, low-budget, oft-forgotten films that were once whispered about in revered tones by people who had never seen them or, in my case, were far too young to seriously inquire about them. Snuff is one such film, and I was delighted when it landed on my desk this week.

The legend is much more interesting than the film. As the title suggests, the viewer is supposed to believe that they are watching actual scenes of a woman, a junior member of the film crew, being killed and mutilated by a guy who looks a bit like an evil John C. Reilly, a senior member of the film crew. Of course, we’re seeing nothing of the sort — unless blood really is the color and thickness of matte-finish one-coat paint.

The actual story behind the film goes something like this: Renowned exploitation filmmakers Michael and Roberta Findlay made a film called The Slaughter, about a cult leader called Satan (pronounced Sa-TAHN) and his group of cute-but-nasty biker chicks. They torture each other, kill a few people, and that’s about it. The film is badly directed and the acting is awful, but it’s not without its sleazy charm. The film climaxes with a double-murder on a bed.

The film ended up in the hands of producer and distributor Allan Shackleton, who paid about five grand for it before seeing it, and realized that it was too bad to release. Then he had an idea. Shackleton had porn man Carter Stevens film a five-minute ending to the movie, in which the camera pans back from the bed following the end of The Slaughter and we see the crew that had been supposedly making that film. That’s when the Reilly look-alike gets frisky said junior, has his crew hold her down, and cuts off her finger with a chain-cutter. It only gets worse for her from there, and the film ends with the guys holding entrails aloft and screaming in triumph, then asking, “Did you get all that?”

Once you have seen the film, you’ll wonder what all the fuss was about, but that wasn’t the point. Back in ’76, once you had seen it, Shackleton already had your money. The terror, the sheer disgust, came from the people who hadn’t seen it but had heard about it and believed the myth. Still, to this very day, there are people out there who believe that Snuff is real, despite the fact that it is widely available. There are commenters in IMDB forums who state that, maybe it isn’t real now, but the original version contained genuine murder footage. I suspect that might be Shackleton, stretching out the legend.

Because, when you think about it, the guerilla marketing campaign behind Snuff might be one of the most successful in cinema history. By toying with people, Shackleton made $70,000 in a year from a bad film that he paid $5,000 for. He’s surely made a lot more since then too, because the legend of this thing lives on.

Again, the legend is more interesting than the film. The Slaughter drags somewhat, and you’ll spend the final five minutes laughing that anyone ever fell into the trap. When a hand is removed with an electric saw, it continues to open and close. Hands don’t do that once severed. No amount of ‘muscle spasms’ explain it.

Far more interesting are the special features on this new DVD, containing interviews with such people as Carter Stevens and retired FBI Agent Bill Kelly, who investigated the film back in the day. Stevens tells some fascinating tales; he says that the actress who is sliced and diced in the final sequence had a freak-out during filming and believed that they were going to kill her until they calmed her down. After all, this was a porn filmmaker and a sleazy setting. She can be forgiven for falling into her own trap for a minute. Stevens settled her by reminding her that his kids were just around the corner and he would do no such thing in front of them.

Kelly is equally interesting, explaining that he had to watch all manner of low-budget films to see if any contained genuine scenes of murder, Snuff among them. They never did and, to his knowledge, no such films have ever been made available.

So rest easy, and watch this notorious film from the ’70s guilt-free. It’s just make-up, it’s just special effects, they’re only animal intestines. No actors were hurt. But one does have to wonder — what does it say about people that the film made so much money while the threat of it being real was still a concern? Common sense says that, of course, a film of that type wouldn’t be shown at a New York movie theater, so you have to hope that the people who paid to see it were in on the joke based on smarts alone. But still, if so many people were outraged enough by rumors to be compelled to protest, some of the viewers who actually paid to see it must have been fooled too. That’s perhaps scarier than the film itself.

Snuff, plus a lot of other great and trashy movies, are available at blue-underground.com