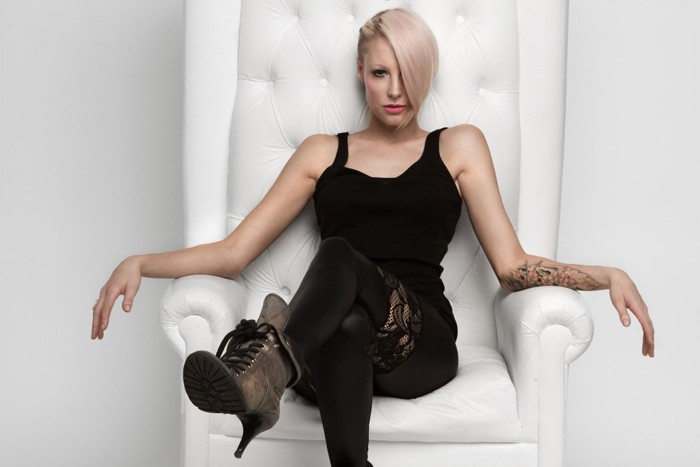 Despite the fact that we’re interviewing Australian trance songstress Emma Hewitt at 9 a.m. Detroit time, which is 11 p.m. down under, the smoking hot singer-songwriter jumps into the conversation with the enthusiasm of a puppy at the park. Her energy is refreshing and welcome; perhaps it’s her upbringing in a remote coastal town in Australia or perhaps it’s the years she spent slogging away in rock bands. Maybe it’s just her individual personality. But Emma Hewitt is completely devoid of cynicism and suspicion. Rather, she throws herself into the conversation completely. Everything is “fantastic” and “awesome,” and it’s impossible not to get picked up by her wave of unrelenting positivity.

Hewitt started singing at 16, in her hometown of Geelong, about an hour outside of Melbourne. “It’s all I ever wanted to do,” Hewitt says. “When I was about 16, I started singing in rock bands, and at about 17, I started to write songs and send those out to people. It took about 10 years before I actually got to make a profession out of it. I was always knocking on doors, trying, and not giving up when I possibly should have at times.”

After speaking to her, it’s easy to imagine this young, talented singer and songwriter hounding the industry until, eventually, somebody wisely relented and gave her rock band, Missing Hours, a shot.

“Not many people know about that. I’m impressed,” Hewitt says. “That was a band that my brother and I had signed to Sony in Australia about seven or eight years ago. It was one of those “almost made it” kind of bands. We had some nice songs and we made a good album, but it just wasn’t to be. It wasn’t the right time. There were a lot of changeovers with the label. We almost hit the big time, everybody left their jobs, and then we kind of got shelved. That was it. We moved on and I went into dance music from there. It was another good learning experience.”

Still, there has to be more to making a serious impression in the notoriously unpredictable and zany music industry than sheer persistence. “We’re quite close to Melbourne so my brother and I were very determined, and when we were young we’d record our own demos and send them to pretty much every management company and record label that we could find in the music industry directory,” she says. “We kept on blanket sending things out, and, after a while, we pushed ourselves up to Melbourne, and got on people’s doorsteps. When that didn’t work anymore, we moved ourselves to London and pushed there. We just had to try and break out of this small town.”

Hewitt spent about half a decade trying to make rent in London and writing songs during her precious downtime. “It was a bit difficult, but it was also very character-building,” she says. “I learned a lot about the industry and about myself during those times. I wouldn’t change any of it. I have fond memories of London now, but I don’t know if I’d live there again.”

Around the time that Missing Hours was on the verge of breaking up, Hewitt recorded a demo with British DJ and producer Chris Lake. He released that and it proved popular all over the world. A light bulb turned on for Hewitt.

“The rock band was my main thing, but this was a nice side thing,” she says. “Then [trance artist] Cosmic Gate got in touch and asked me to write a song for them. That went well. Then Dash Berlin got in touch, and the same thing happened. All of a sudden I said, ‘Hang on a sec. This suits my writing style so much better than rock music, and it suits my voice better — maybe this is meant to be.’ At the time, the band was in the process of falling apart, and the label was dropping the ball. It wasn’t going so well, so I decided to try this path, and I haven’t looked back. Now I absolutely love dance music and trance, and I can’t imagine doing anything else now. God, what was I doing in rock?”

Now Hewitt is an in-demand figure on the club and dance festival circuit. Those years of listening to Nirvana and the Smashing Pumpkins must seem like a long time ago, though she says her songwriting process has remained pretty much the same. “I look back on the Missing Hours songs and, apart from the drums and guitars, the actual songwriting is pretty much exactly the same,” Hewitt says. “They’re pretty much pop songs really. I’ve stayed true to my style of writing in that sense.”

She’s now based in L.A. and has been for the past year-and-a-half, although she says she’s only spent about six weeks at her California apartment due to the constant touring. Hewitt plays a lot of clubs nowadays, which she says she much prefers to the traditional rock gig experience.

“As soon as I went on stage to a club crowd, I thought it was amazing,” Hewitt says. “At a club or a dance music festival, everybody’s there to have a good time. The energy in the room’s always up. When you walk on stage, you feel like everybody’s on your side, you’re all in this together, and you’re trying to create a memory or a moment that’s amazing for everybody. The energy of that, you can’t beat. Rock gigs were cool, they were fun, but it always felt like you had to prove yourself to the crowd that was standing back and saying, ‘OK, can you guys play guitar? What have you got?’ It was a different kind of fun. The happy energy of a club show is very infectious.”

We’re sure that infectious happy energy is symbiotic though; Hewitt likely feeds the crowd as much as they feed her. Metro Detroit could sure use a burst of that, and she’s at Elektricity this weekend.

“I’ve got a new visual show that I’m excited about,” she says. “It’s synced up to the music and everything. I’ve got a couple of new tracks, a couple of older tracks as well, and a few mash-ups. I can’t wait to debut this new set and the new format.”

We can’t wait to see you.