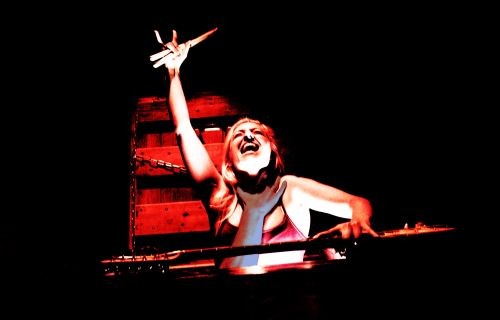 There’s a scene in the Jason Segel-Russell Brand movie Forgetting Sarah Marshall, in which Segel’s character performs scenes from a production he has written called Dracula: The Musical. The comedy stems from the fact that vampires and the horror genre in general make ridiculous subject matter for a musical. As is so often the case, however, real life is far more ludicrous than the fictional world, because Count Dracula seems a tame fictional character when compared to the terrors in Sam Raimi’s cult classic Evil Dead trilogy — and yet Evil Dead: The Musical exists.

The brainchild of Canadian comedian George Reinblatt, ED:TM was conceived 10 years ago. “It seemed to me that anything on Broadway, anything that’s a successful play, is based on a movie,” says Reinblatt. “There are so many. I got thinking, what is the most ridiculous movie that could possibly be turned into a musical. It turned out it was this one. The other thing is, if you really break it down, there are so many weird things that happen: he saws off his hand and it comes back to life, the whole cabin comes to life, stuff like that, that translates onto the stage. For those that have seen the movie, seeing those effects on stage is great. The other thing I’ll say is, if you’ve never seen the movie, this show still stands on its own. A large percentage of the crowd has never seen the movies. If you’re already a fan, you’re going to get some of the inside jokes more, but you’ll enjoy it either way. The other thing is, the Sam Raimi movies kept getting more and more crazy as they went along. We’re taking that to the next level — taking it more crazy. Ironically, the new movie that came out went back to a real hardcore horror, but we’ve taken it the other way.”

The writer says that the musical is based on Raimi’s original movies, rather than the recent remake. “It is based on the first two Sam Raimi Evil Dead movies, with splashes of the third,” he says. “It is your standard horror theme of five college students going to a cabin in the woods that’s abandoned, and slowly, one by one, they turn into demons and try to get each other. Then more people turn and they turn evil. It turns into bedlam. The bottom line is all these people die then come back to life over and over again. As much as it’s based on the horror genre, this show’s not scary at all. It’s campy and fun. The new movie stands on its own. It’s the same world as Evil Dead, but it’s not quite the same.”

One has to wonder if Reinblatt considered any other horror classics for the musical treatment before finally settling on Evil Dead. For example, Cannibal Holocaust: The Musical sounds like a wonderful idea. How about The Human Centipede: The Musical? “No, this was the first idea that came to our minds,” says Reinblatt. “Evil Dead was made by a bunch of young guys out of Michigan. Even though we had no credit, no money, no anything, they gave us the go-ahead to do this, which is insane when you look back on it. We lucked out with our first go-round.”

Evil Dead: The Musical is now a decade old, and well and truly into its stride. “In its first four years, it was still being rewritten and worked on, but when it first opened on Broadway, it’s been locked ever since,” says Reinblatt. “There were a lot of changes as it went along, but less major changes than you’d think. Since 2006, it’s been pretty much the same.”

Evil Dead fans are notoriously precious about the treatment of the franchise, but Reinblatt says that the response from the “deadites” has been overwhelmingly favorable. “It is amazingly positive, and I’m shocked about it,” he says. “These are horror fans, and this is a totally different genre. But they love it. It is the most shocking thing about it. I thought some people would love the fact that we’d made a musical and some would hate it, but it’s been overwhelmingly positive to the point that I can’t believe it. Some of these songs are really cheesy on purpose. It’s amazing how much they’ve taken to it. You have to realize, when we wrote this there wasn’t a lot of swearing in musical theater, but this has more swear words than anything. I think it’s only the second or third cast album to have a parental guidance sticker. People love that. It does well in Detroit. They pick it up every Halloween — it’s become a tradition out there. People love to go to this show, and they love to come back over and over. There’s so much going on, you’ll always find something new about it. A large percentage of the people coming to this run will have been before. Very similar to the Rocky Horror Show.”

Similarly, Evil Dead creators Sam Raimi and Bruce Campbell have given their support from day one. “They have been so supportive this whole time,” says Reinblatt. “In a lot of ways, they’ve let us do our thing. Bruce has been to the show many, many times. He’s said before that he’s a big fan, and all those guys are. Trust me, we wouldn’t be here all these years later if they didn’t like it. They’ve gone above and beyond with their support.”

In fact, Campbell told us that, when first hearing of the project, thought that the idea was intriguing but had no idea how they’d blend three stories into one. “I was pleasantly surprised,” the actor says. “I laughed my ass off. It’s a fun musical to see. I pitied the poor bastard [playing the character of Ash]. He had to play that character longer than I ever did. My favorite part of the show is a number called ‘What the Fuck Was That?’ It captures the essence of the musical.”

Despite the recent remake, there have been whispers of a big-screen version of ED:TM, in the same vein as The Rocky Horror Picture Show. According to Reinblatt, we shouldn’t hold our breath. “We’re always open to anything,” he says. “Right now this show lives on the stage, and it’s one of the most unique stage experiences you’ll ever see live. We have a splatter zone — we have a section of the audience that gets covered in blood, and they’re the most sought-after tickets. People want to go to get covered in fake blood. They love it. Right now, a movie’s not on the cards. If you can find a way to splatter people in a movie theatre, maybe. We’re happy with the live show, and I think everyone who sees it will have a really good time.”