Expunging marijuana convictions would be easy under new Michigan bill 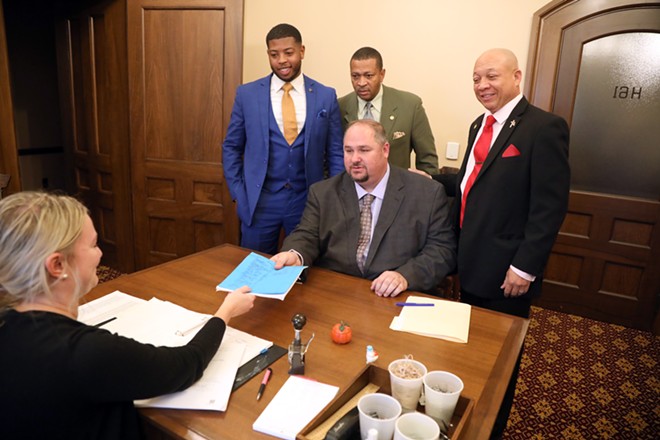 Nearly a year after Michigan voters approved the legalization of recreational marijuana, residents with pot-related convictions still have no recourse to clear their criminal records.

That would change under a bipartisan bill, introduced this week by state Reps. Isaac Robinson and Jewell Jones, that is aimed at providing a fresh start for up to 235,000 Michigan residents with pot-related convictions. Marijuana convictions can be a barrier to accessing jobs, loans, housing, education, and some public resources.

The bill is one of the most comprehensive in the nation, allowing for expungements for misdemeanors and some low-level felonies. The legislation would also streamline the expungement process, giving prosecutors just 60 days to challenge petitioners. And unlike some states with expungement legislation, the only requirement is to fill out a simple application. That means no attorney fees or long wait times.

“This is the most comprehensive piece of legislation around expungement,” Margeaux Bruner, a cannabis educator, lobbyist, and consultant with Perpetual Harvest Sustainable Solutions, tells Metro Times. “Expungement is a logistical nightmare. It’s a very labor-intensive process. It’s really important that we make this easy for people.”

The legislation comes a month after state lawmakers introduced a package of bills that would allow people convicted of petty crimes to petition the courts for expungement. But those bills drew criticism for not including low-level felonies and failing to simplify the process.

“It’s really an example of bipartisan efforts and cooperation,” Robinson, of Detroit, tells Metro Times. “It will simplify the application process and make it easier for over 200,000 marijuana convictions to be expunged. This will deliver an automatic procedure for almost anyone who applies. It gets rid of the red tape.”

Of the 10 states that legalized recreational marijuana, only three have not created a path to expunge pot-related convictions — Michigan, Alaska, and Maine.

Robinson says Michigan Attorney General Dana Nessel played a key role in the process. Nessel, a Democrat, has the unique experience of serving as a prosecutor and defense attorney, giving her a perspective from both sides of the law. On Oct. 9, Nessel spoke in favor of the expungement bill before the state House Judiciary Committee.

Nessel believes it’s unfair for people to be burdened with a criminal record for actions that are now legal.

“The Attorney General has been supportive of legislation that ensures expungements for misdemeanor, ordinance, and low-level marijuana offenses, while reducing barriers for those petitioning to have their convictions set aside,” Nessel’s spokeswoman Kelly Rossman-McKinney tells Metro Times. “Anything that is legal today should be removed from someone’s record as we work to remove obstacles between our residents and good-paying careers.”

In May, Nessel created the Marijuana Legal Workshop to “review, analyze, discuss, and opine on laws and regulations concerning the recreational and medicinal use of marijuana in the State of Michigan.”

“Dana is awesome. She is a boots-on-the-ground kind of person,” says Bruner, a member of the workshop.

One of the leading advocates for expunging pot-related offenses, Barton Morris, says he’s happy the bill includes expungement for some felonies.

“There are people who were operating dispensaries and ended up getting convicted,” Morris, an attorney for Cannabis Legal Group, tells Metro Times. "There are people currently serving probation, jail, and prison sentences for nonviolent marijuana-related convictions.”

The bill covers low-level felonies for offenses that involved less than 5 kilograms of marijuana or fewer than 20 plants.

A recent University of Michigan study underscores the benefits of expungement. Researchers found that job applicants without criminal records are twice as likely to get employment, and people saw an average 25 percent increase in wages after expungement.

“When marijuana is legal, it doesn’t make sense for convictions to be haunting a person’s employment prospects,” Karen O’Keefe, who directs state policy at the pro-legalization Marijuana Policy Project, tells Metro Times.

Jones, who introduced the bill with Robinson, says expungement offers a fresh start for people with pot convictions.

“When we talk about removing barriers to opportunities, like access to ownership, HB 5120 is the only piece of legislation that makes sense,” Jones tells Metro Times. "No one should be suffering from the thing that people are excited to profit from — marijuana."

Expungement has also become a civil rights issue. Although the rate of marijuana use is similar across racial and ethnic lines, Black people are four times more likely to be arrested for possession.

“Far more people have their dreams derailed because of their race,” O’Keefe says.

Supporters of the legislation are calling on the House Judiciary Committee to soon hold a hearing on the bill.