The Akron dudes return to Detroit 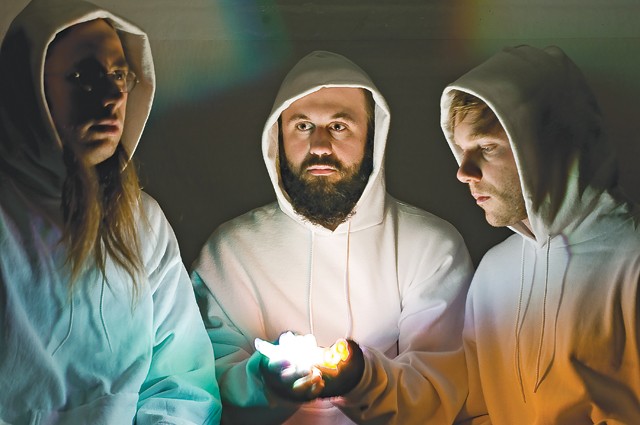 The group began as a Brooklyn-based foursome, breaking out on Michael Gira's Young God Records in '05 with a fragile psyche sound that soon morphed into an experimental out-rock juggernaut. In 2007, original member Ryan Vanderhoof left the group to join a Buddhist monastery in Ann Arbor, and the band soldiered on as a three-piece.

Drummer Dana Janssen talks about the new record and his love of the Motor City.

Metro Times: This was your second time recording in Detroit. Does the city seep into your writing?

Dana Janssen: I think so. I'm more familiar with the Motown scene and all that. The history of that area is amazing. I dig some of the music coming out of there right now, but it's not like what it was.

MT: Did you guys hit the town? Do you have some favorite spots?

Janssen: Yeah, we went out to — do you know Chris Koltay? He's like the mayor of Michigan Avenue. He took us out to a steakhouse in a hotel off of Michigan for my birthday. So we're going down there in his '82 green Lincoln Continental, and we run a red light, and there's a cop sitting there. We had all just done a shot of tequila, and we smelled. Chris doesn't have his registration on him, or his insurance, one of the two, and the cop's like, "OK, step out of the car," and I'm like, "I don't want to have to go bail this guy out of jail." Koltay manages to talk his way out of the ticket and the cop lets us go. He's like, "OK, happy birthday. Have a fun night."

MT: It's said that the band recorded inside Michigan Central Station. Did you actually do any recording there?

Janssen: I'm not going to admit to this shit, man. [laughs]

MT: The album, with its unwieldy title, implies some sort of reset for the band.

Janssen: It's been a process to get comfortable [since Vanderhoof left the band]. Shinju TNT is a character we invented on tour. It's essentially the joy we've refound and are experiencing creating together. It needed a name, to be embodied. The title lends itself to inviting the listener into the story. It's like, "Hey, there's folklore being built and you're invited to participate."

MT: You used the words "joy" and "connection." I definitely get that from the record. It sounds like there's a level of comfort there.

MT: Looking at old interviews, a lot of people asked you about being "freak folk" and "New American Weird." People couldn't care less about those words in 2011. Is that a relief?

Janssen: It's nice to see tags and that genre disappear a little bit. In my eyes, it always came out of what seemed to be a trend, and I never felt that we fell squarely into that.

MT: Do you keep in touch with Ryan since he left?

Janssen: Yeah, he came out to the studio and played some slide guitar and contributed on this record. He's a great guy.

Janssen: We're going to take it easy and see where we end up after this cycle of events. I'm really proud and excited about this record.