Into the suburban gothic with Suburgatory; WADL doubles 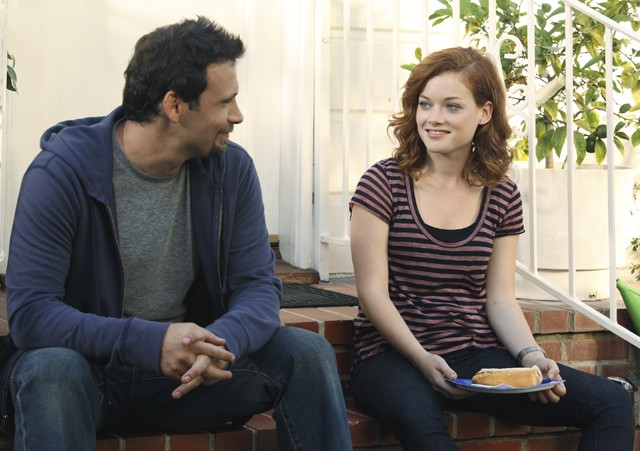 Every fall without fail, TV gives us a handful of what I like to call "mystery" series. It's a mystery how they ever claimed a spot on the new prime-time schedule over other pilots and some very good series that got canceled the previous season. It's a mystery how they can be expected to attract a curious audience with virtually no advance promotion or hype. And even though they may be oddly sweet or interestingly cast, it's an absolute baffler how they'll possibly survive the ratings wars past Thanksgiving.

Such a series makes its debut tonight, the mysterious new family comedy Suburgatory at 8:30 p.m. on ABC (Channel 7 in Detroit). A familiar twist on the strange-girl-in-a-stranger-land premise, the sitcom stars Jeremy Sisto (whose crooked smile and gentle manner I realized I'd missed since the premature demise of Law & Order) as George, an architect and single father who spies a box of condoms — unopened, it should be noted — on the nightstand of his teenage daughter, Tessa (newcomer Jane Levy, fresh from Showtime's Shameless), and immediately whisks her from Manhattan to the manicured lawns of suburbia in order to remove her from such carnal temptations.

Does George overreact? What do you think? It would take a lot more than that to get most architects out of New York City! But that major plot loophole is quickly forgotten as Tessa attempts to navigate the bizarre customs and creatures of the cul-de-sac. "Pretty ironic," Tessa deadpans, "that a box full of rubbers landed me in a town full of plastic."

Her new high school pairs Tessa with a "buddy," an ultra-cool, dead-eyed coed named Dalia (Carly Chalkin) to show her the ropes. OK, let's play a game: the elements of Suburgatory remind us of how many other previous projects? I can think of Mean Girls, Daria, Juno and Desperate Housewives without straining my brain. Now you add some more. There's even another new show this season with the same basic construct, The CW's Hart of Dixie. Somehow you get the feeling that when ABC bigwigs land on a monster hit like the sublime sitcom Modern Family, they just got lucky. Mostly you sense that they don't get out enough.

The show is saddled with an invented name that some percentage of TV junkies won't be able to pronounce. (Except in the Bible Belt, where they know all too well about purgatory.) History suggests that cutesy, made-up titles don't usually fare well in prime-time competition. And compared to ABC's blockbuster fall hopefuls like Pan Am or Charlie's Angels, how many on-air promos or print ads have you seen for Suburgatory? I rest my case.

The show does have an interesting supporting cast. Cheryl Hines (Curb Your Enthusiasm) appears as Dalia's cougaresque mom, Saturday Night Live alum Ana Gasteyer is wasted in the pilot as the loud, overly friendly neighbor, and Jay Mohr, taking no time to lick his wounds from Gary, Unmarried, has joined the cast as Hines' TV hubby. But by plunking Suburgatory in the 8:30 p.m. Wednesday time slot without benefit of promotion, ABC is apparently banking that as the "hammock" show between existing hits The Middle and Modern Family, Suburgatory will be sampled and succeed simply by residual viewers from those bookend series. Let's not get too cocky, now. Modern Family blew The X Factor out of the water in its first head-to-head encounter last week, but Family was a special, hour-long season opener. Don't think that America is so lazy it won't switch from The Middle to see what deviltry Simon Cowell is up to.

Flipping: A whopping 28.7 million viewers tuned in last week to see Ashton Kutcher's entrance on CBS's Two and a Half Men, its most-watched episode ever as the series enters its ninth season. Ironically, Charlie Sheen's madcap rantings before and after getting bounced from the show inadvertently boosted Men to a record audience. It trounced the highly anticipated season opener for ABC's Dancing With the Stars, revolving around the appearance of Chaz Bono, which ended with a 19 million average for the evening. Lost in the competition is the fact that nearly 48 million Americans watched two prime-time network shows on a Monday night, suggesting that if the networks build it, they still will come.

Chances are, however, they may not stay. Nobody expected numbers that huge for Men, and the truth is that Kutcher was good but not galvanizing in his role, and executive producer Chuck Lorre won't be able to pull off surprises like Jenna Elfman and Thomas Gibson in a Dharma & Greg reunion every show. The ratings for this week won't be out until this sheet is printed, but I'm willing to bet the Kutcher curiosity factor will be over in record time.

Meanwhile, as is so often the case, all the controversy and red-state furor over The Playboy Club on NBC may have been needless energy expended: The debut of the 10 p.m. drama drew a paltry 5 million viewers. Even bunnies multiply faster than that.

WADL-TV (Channel 38), which has transitioned from "Detroit's Urban Station" to Detroit's everything-for-everybody station, is adding a second channel to flood the market with even more old shows. It has inked a deal with Antenna TV, the new programming source launched by Chicago-based Tribune Broadcasting, to occupy its dot.2 multicast channel with classic hits like The Monkees, All in the Family, Leave It to Beaver, The Partridge Family and Soap beginning Saturday, Oct. 1. WADL "the Deuce" will be available on Channel 38.2 on your digital tuner and at 295 on Comcast Cable. Check your cable or satellite provider to find out where it can be seen on your sets.