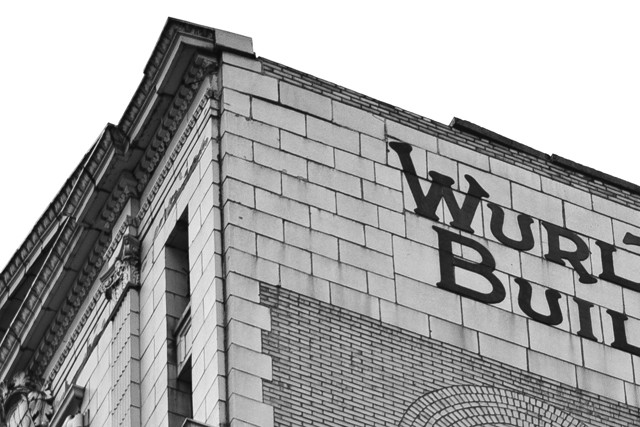 The crash came in the middle of the night.

Snapped awake by the sound of shattering glass sometime around 3 a.m., Chris Jaszczak's first sleep-fogged thought was that something had been hurled through a second-floor window in his building at 1515 Broadway in downtown Detroit.

He raced down a flight of stairs and hurried outside, hoping to catch sight of the culprit. With the exception of a neighbor summoned by the noise, the streets were empty. Then, as he inspected the damage, it occurred to him that there was a lot of glass on the ground.

That didn't make much sense. If something had been thrown through the window, the shards should have been on the floor inside, not outside on the sidewalk. So he climbed back up the stairs to the loft where he lives, above the café and performance space that has been a fixture in this neighborhood for decades.

Back inside, the picture of what really happened began to come into focus. Something had crashed partway through the ceiling, cracking several rafters and breaking one completely, sending it through one of the oversized windows that look out on the People Mover as it rolls past.

Up on the roof, he could see that a block of stone weighting 40 or 50 pounds had come hurtling down 12 stories from the top of the adjacent Wurlitzer Building.

That was in early April. But the landmark building has been falling apart for years, bringing Jaszczak more headaches than he can count as falling bricks continued to cause minor damage to his building's roof. Repeated complaints to the building's owner fell on deaf ears, says Jaszczak, a longtime friend of this paper.

Detroit attorney Paul D. Curtis, according to a 2004 Free Press article, purchased the 14-story building in 1995 for $211,021. Officially, Curtis no longer owns the Wurlitzer. Public records show the property has been owned by an entity known as 1509 Broadway, LLC since 2008.

Limited liability companies such as 1509 Broadway are not required to publicly disclose ownership interests. However, Kimberly James, director of the city's Building Safety Engineering & Environmental Department, tells News Hits that she spoke with Curtis about the building's problems in February of this year, and considers him the one responsible for making sure it complies with city codes.

"The building's owner got kind of belligerent about his responsibilities, saying that he couldn't afford to do the work required," James says of her conversation with Curtis.

But the Wurlitzer's history of problems began far before the LLC entered the picture. Information posted on the website Buildings of Detroit reveals that "city safety inspectors have been documenting unsafe conditions at the building since October 2000."

Opened in 1926, the Renaissance Revival-style building, as described by Dan Austin — co-author of the book Lost Detroit and editor of the website — featured a "gorgeous terra cotta face, granite piers and trim and an intricate facade accented with ornamental detail." Among its many features was a 400-seat auditorium for "concerts and recitals by student groups."

The Detroit building had been vacant for 13 years by the time Curtis bought it. Although he had "promised several times to redevelop the property," Curtis "has done nothing with it and left it largely open to trespass," Austin's website reported. "Vandals and thieves have destroyed much of the interior and stripped it of valuable metals."

Curtis did not return phone messages and an e-mail seeking comment.

For Jaszczak, who has called 1515 Broadway home since 1985, the Wurlitzer and the city-owned Metropolitan Building, located directly across the alley behind his building, are both hazards and eyesores of what was a sort of no-man's land when he first moved in. No longer dominated by vacant buildings as it once was, this short stretch of Broadway has blossomed into a rejuvenated district featuring several popular restaurants, a brewpub, the new Boll Family YMCA and the refurbished Detroit Opera House.

Problems with the Wurlitzer, however, have only grown while the rest of the area has seen new life emerge. It has long been open to vandals and vagrants. Even now, the building is easily entered through the back.

In 2004, the Freep reported that the Wurlitzer had been visited by building inspectors who issued tickets for violations such as tiles falling off the fa�ade and a defective fire escape."

In the same article, the paper quoted a letter from Curtis to the city describing "conceptualizations" for renovation and letting it be known "that this owner has not just sat back and watched the property but has been active in seeking a total rehabilitation of the property."

Since then, the building has continued to deteriorate, with the problem of falling debris growing from tile and bricks to a piece of cornice heavy enough to smash ceiling beams. As for that fire escape, located at the rear of the building, it is still there, apparently more dangerous than ever.

Standing in the alley behind his building, where cigarette breaks are taken with a wary eye cast upward, Jaszczak points to the twisted steel steps hanging precariously, and to a spot on one of the Wurlitzer's top floors where the brick facade is separating from the building's structure.

The city erected a chain-link fence blocking off the front of the building, but in the rear there is not protection if the brick facade and fire escape were to fall away.

On April 6, five days before Jaszczak's rafters got crushed, the city filed a complaint against 1509 Broadway, LLC in Wayne County Circuit Court. In the complaint, it is noted that numerous inspections of the building had found multiple violations, and that orders to correct them were issued.

"The defendant has failed to comply with and otherwise completely ignored these corrective orders, and accordingly has been issued well over 100 blight violations."

Among other problems noted in the complaint is the fire escape, which is "dilapidated, broken, not properly secured to the building, tearing away from the parapet wall, pulling a huge portion of exterior brick away from the building structure and is otherwise on the verge of collapse onto the alley which is traveled by vehicles and pedestrians."

The complaint goes on to note that "all the way around the building" brick and pieces of facade are "deteriorated, crumbling, cracking ... and actually falling from the building to the ground in areas of high pedestrian and vehicular traffic, and also directly above the People Mover."

Among other things, the owner was ordered to "immediately erect a safe and properly designed protective pathway in the rear alley and front sidewalk. ..." As of Tuesday, the area at the rear of the building remained opened.

There was also an order to remove the fire escape within 10 days. That deadline came and went without action being taken.

James says failure to comply with demands made in the complaint is a misdemeanor offence that can result in a fine and/or as many as 90 days in jail.

As for Chris Jaszczak, he isn't sleeping all that easy these days, worried that more stone could come crashing down at any time. The concern is that next time it won't be just a fractured roof and smashed glass that results.

The next time, someone could be hurt. Even killed.

It is not a problem unique to the Wurlitzer Building. As Francis Grunow, former head of the nonprofit group Preservation Wayne, notes, the city is hard-pressed to find the staff and money to keep on top of all the vacant downtown buildings that have fallen into disrepair.

But it is likely that difficult job would get a lot easier if officials started seeking jail time for the owners of buildings as dangerous as the Wurlitzer.

It would send a clear message that the city is serious about keeping the rest of us safe from those whose buildings pose a real threat.