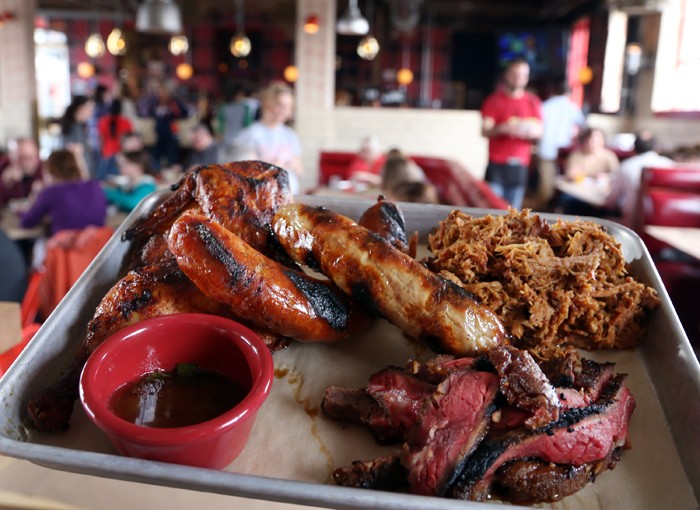 The folks from the Union Woodshop restaurant group (dare we call it an empire?) are up to their old tricks again. This time, they drove about an hour out of Detroit to the sleepy town of Fenton, home to some lovely driving roads and a gorgeous old fire station. Far from being doused, the flames are being kindled to produce good food at the recently opened Fenton Fire Hall.

The building is three, split-level stories, with a bar and lounge area on the bottom floor, a dining room on the upper floor, and what appears to be rooftop patio seating now being readied for the summer. In the tradition established by the group, the decor of the restaurant is centered on its identity as an old fire station. There’s fire engine red, safety orange, charcoal blacks and yellows in the color scheme, as well as framed photographs of firefighters and equipment — and a chandelier made of fire hose. It’s wild, but not over the top. The main-floor dining room of the fire hall is, of course, the former parking area for the fire engines. Giant garage doors make up one wall, unquestionably reminding you of where you are.

Not that you could forget, because the most eye-catching thing in the room is the wood-fired grill pit. The cook operating the station is introduced by the server, and works in full view, as the grill is thrust out into the main dining room and serves as a centerpiece of the place — a status cemented by the menu, where the pit section dominates. First-time visitors ought to take the easy way and order a “Lord of the Pit” entrée platter —pulled pork, flank steak, sausage and a half-chicken — providing a cross-section of the excellence on display in the pit.

The half-chicken is perfectly tender and juicy, full of flavor and smokiness, with well-rendered skin. The sausages are superb, made in-house: There’s a hot link, which is nicely spiced and has a great texture; a bratwurst, poached in beer; and a changing “Dave’s Whim” sausage.

The pulled pork at the Fire Hall is spectacular. The slow-cooked meat is moist, fork-tender and excellently seasoned. It’s tossed in a sharp and vinegary Carolina-style barbecue sauce, and is one of the best items on the whole menu. Seek it out, pair it with some cornbread stuffing and cole slaw, and find yourself a spot of heaven.

The rib-eye steak should not be undervalued: Despite being “just a steak” at a restaurant that does so much with its food, a wood-fired steak is truly a thing of beauty. It’s served with a tarragon chimichurri that complements that char with a brightness and freshness (the sauce is also excellent on the chicken).

With a section like that at the center of the menu, it’s easy to forget that there’s anything else to eat, but the Fire Hall delivers here too. Chili is available in three varieties, vegetarian and not. The red chili is delicious, with a smoky taste reminiscent of the chili you make when you’re camping. Chili also forms the basis of what might be the signature appetizer at the Fire Hall, a particularly well-made version of the lunchroom standby: the walking taco. For the uninitiated: a bag of Fritos, sliced open, with chili, cheese, scallions, peppers, lettuce and sour cream. Make of it what you will, but try it before you dismiss it — or grab the cast-iron octopus, if your adventurous streak runs the other way.

A variety of mac and cheese preparations are available — and since it’s Union Mac, it’s reliably delicious and cheesy. The Thanksgiving Mac, with turkey, cherries, celery and sage, is particularly interesting, and the Yeti Mac wins major points with its use of what we called this year’s Best Condiment, egg.

The beer menu at the Fire Hall is imposing, and inspiring. It’s a cross-section of beer from simple, accessible classics to esoteric microbrews, from all across the world. There’s a house beer, brewed by Right Brain, up north. There are brews from Fenton, from Belgium, from Detroit, from California. There’s also a cocktail menu well worth exploring — make sure to try the State Fair Lemonade for a summer experience from childhood that will sneakily get you quite drunk. It’s magnificently sweet, fresh and lemony, and it’s served in a closed mason jar with instructions to shake well before consuming.

Fenton is a beautiful small town, and the Union folks have put a great restaurant there. The Fenton Fire Hall is an excellent addition to the place, and an excellent reason for people all over metro Detroit to make the drive.