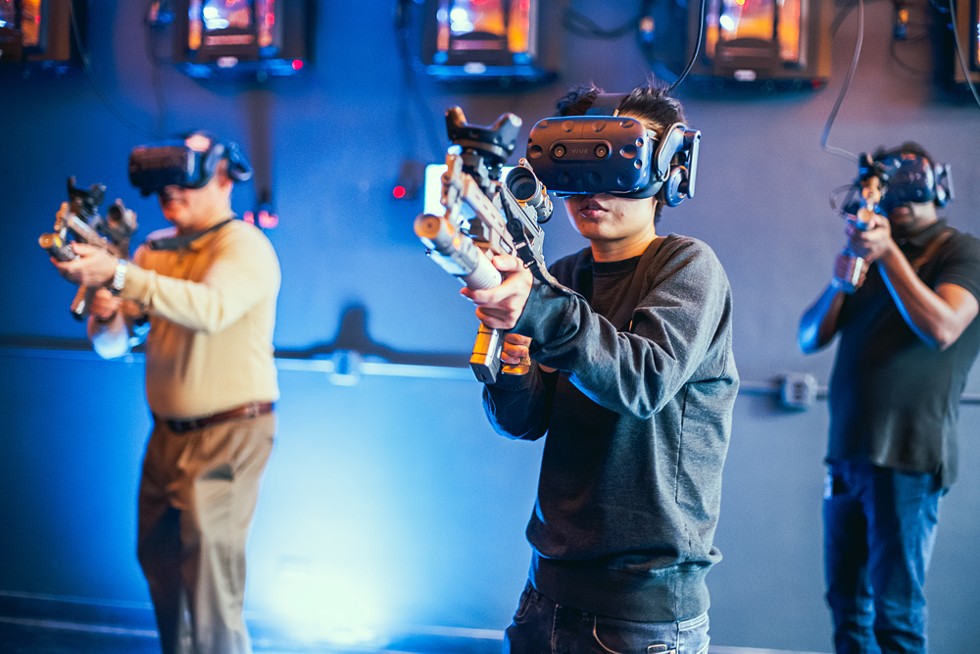 At first, everything is black. Then, suddenly, I can see.

In real life, we're strapped into virtual reality goggles at VR+ Zone, a new video game arcade that opened in October in Ferndale. Previously, the space housed a gym, but now its treadmills and weights have been replaced with different exercise machines — machines that work your brain, and your faculties of perception.

The goggles — HTC VIVE Pro headsets, to be precise — are attached to cables that dangle from the ceiling, each connected to their own individual computers, which contain desktop gaming-grade software. The goggles block out all light, so all you can see is what's on the tiny screens inside them. They're mounted with a sensor, so the software knows where you're looking and adjusts what you see accordingly; with the goggles on, you can look in every direction, 360 degrees. It really feels like you're in another world. We're also handed a plastic gun, also mounted with a sensor.

The first game we try is Dead Prison. In the game, we stand stationary in the middle of a dilapidated building as zombies slowly lurch down the hallways. Soon, red-eyed crows attack us from above. The game is cooperative; we quickly divide into teams, strategizing and shouting commands at each other to try to keep the horde and crows at bay. The graphics are terrifyingly real: if the zombies get up close, you can see their rotting flesh. It's scary as hell — but fun.

VR+ Zone is a Chinese franchise, brought to Detroit by auto industry workers after experiencing it on a business trip. (The owners declined to be interviewed on the record.) The chain now has arcades in more than 10 cities across the world; the Ferndale location is the company's first in North America.

In Ferndale, the main room features all shooting-based games, which cost anywhere from $17 for one person or $60 to rent the entire room for an hour for four to six players. A smaller attached room has "VR Rides" or "experiences" that are more akin to riding a (stationary) rollercoaster that start at $7 per game, and a few other games, like one where players have to destroy targets with lightsabers, are also strewn about the space.

Virtual-reality technology is nothing new — the first primitive headset display was invented in 1968. But modern computer graphics capabilities have helped make the technology go mainstream in recent years. In 2012, California-based company Oculus started a crowdfunding campaign to fund the development of its Rift headsets, raising almost $2.5 million from some 10,000 contributors. In March 2014, the company was purchased by Facebook for $2 billion, and the headsets have become popular for home use. In China, virtual-reality arcades are a big business, where the market is forecasted to grow to $782 million in 2021, according to a report by iResearch Consulting Group and Greenlight Insights.

Though other arcades in metro Detroit offer virtual-reality games, VR+ Zone's, I'm told, are unrivaled in terms of the quality of the graphics. Plus, the company makes its own games, and releases new ones every month or so.

On a recent weekday evening, a group of workers from General Motors booked VR+ Zone for a holiday party. "We wanted to do team-building, so we thought instead of going out for dinner we'd shoot zombies instead," Michelle Roy, the group's manager, tells me. The GM group fills the room, with overflow waiting on the sidelines for their chance to be swapped in. They're playing a new game that just came in called Infinite War, where two teams face off against each other, featuring up to eight players total. It's another zombie shooter, but here one of the teams can control the zombies. The defending team has to hold off the horde for 10 minutes, and then they switch sides.

Wing Ye, who was among the GM group, says she experienced virtual reality for the first time while in Guangdong, China, last year on a business trip. She quickly became hooked. For one, she says, they're intuitive. There are no complicated controllers — you just point and shoot.

At first, she was nervous. "When my friend invited me to go to that place for gaming, I wasn't really sure about it because I get motion sickness — so I can't ride rollercoasters, or even ride in the car for a long time," she says. "But in these shooters, I don't feel any motion sickness from the game."

VR+ Zone's games, a staffer tells me, have a 90 Hertz refresh rate, meaning the image on the screen is redrawn 90 times per second. Most desktop gaming computers render images at 60 Hz. Apparently, there's an uncanny valley for perception: the better the frame rate — and the more lifelike the graphics — the less chance of motion sickness there is. But this also means it can be hard at times to tell the difference between reality and virtual reality.

"You're so immersed in it that it's hard to know what's real and what's not," Ye says.

At one point while playing Dead Prison, overwhelmed by an approaching horde, I spin around and am startled to find a ghoulish, towering zombie has managed to lurch all the way over to me — and now appears to be inches from my face. I recoil in horror, my heart racing, uttering a string of profanities I'm too embarrassed to publish here.

‘You’re so immersed in it that it’s hard to know what’s real and what’s not.’ tweet this

Suddenly, I feel a pair of invisible hands gently touch me on my back; it's one of VR+ Zone's staffers, back in the real world, gently repositioning my body. I had such a visceral reaction to the game that I moved away from the marker I'm supposed to be standing on so my sensors line up with the game. The firefight against the undead continues, but I'm distracted; my fixation on this virtual world, and obliviousness about the real one, has my mind now pondering Plato's Cave and The Matrix films.

Finally, it's game over — my friends and I are all defeated by the zombies. We have to take the goggles off for a minute and recollect ourselves. I look around and everybody's sweating. We ask if they have any games that are a little less scary.

A staffer fires up Guardian Heroes, another zombie shooter, but here everything is rendered in a cartoonish style similar to the blocky world of the Minecraft games. The colorful graphics are a welcome respite from the house of horrors we've been immersed in, but the technology still has a way of tricking the mind. At one point, the cityscape we're in begins to bend into itself, like in the dream world of the film Inception. What was once the ground below us folds like origami, now surrounding us as walls. Soon, the bottom drops out below, and our characters are floating in the sky, with enemies now approaching us from all angles. It's a disorienting experience, to say the least.

Another game, The Lost Jurassic, is similar to Dead Prison — yet another shooter, except now it's hordes of dinosaurs and other prehistoric creatures, instead of zombies. At one point, a large ape slowly lurches toward us, heaving a huge boulder over its head.

VR+ Zone staffer Grace Fowler tells me that a few weeks ago, a woman got so scared when the sasquatch threw the boulder that she actually ran away in real life — yanking her headset from the ceiling.

"We definitely got security footage of it, and we definitely thought about using it in promotional material," Fowler says with a laugh. "People have a lot of funny reactions to the games."

This habit of players occasionally forgetting they're just playing a game means the VR+ Zone staffers spend a lot of time babysitting our bodies in the real world while we're lost the virtual one. Fowler says the company hires its staff with that in mind. "We get a lot of people who are really into gaming," she says. "That's great, but I'm like, can you make people feel comfortable when you're moving them around and they can't see you?"

There's good reason for VR+ Zone to be precautious here. In 2017, Russia's state-owned news agency TASS reported that a 44-year-old man died after he crashed into a glass table while wearing a virtual-reality headset, bleeding to death — the first death reported due to a virtual-reality-induced accident. In a recent New Yorker article, "Taking Virtual Reality for a Test Drive," author Patricia Marx says she broke her toe while reporting the story. At VR+ Zone, you have to sign a waiver to play.

Still, beyond video games, the technology holds a fascinating potential to change the way we see the real world and our own minds. A 2013 study from Stanford found people who played a superhero game were more likely to help offer help during a staged accident in the laboratory's hallway after the session, apparently feeling empowered after their virtual acts of heroism. A 2016 study found people who played VR games were more likely to have lucid dreams, appearing to learn how to approach the dreamscape constructed inside their minds by their own subconscious just as they learned to navigate the world of virtual reality. And multiple studies have found that VR technology can help teach empathy and reduce bias by making the user embody avatars different from their real life identities. A 2018 study from researchers at the University of Barcelona found that men who committed domestic abuse felt more empathy after experiencing virtual reality from the perspective of a female abuse victim. And this year, Courtney Cogburn, an assistant professor at Columbia's School of Social Work, created a 12-minute virtual-reality film called 1000 Cut Journey that puts the viewer in the perspective of a Black man experiencing racism. (The experience was inspired, she says, by her time at the University of Michigan, where she found many of her fellow students claimed to be "color-blind.")

In the meantime, Ferndale's VR+ Zone is at least a fun outing. In a few weeks, the owners say they plan to reconfigure the machines in the smaller room to make room for new wireless headsets, which will allow players to move around, untethered from cables. Of course, this will likely require even more babysitting, and devising methods of making the room accident-proof.

If you go, just remember — it's all in your head.