A compelling story based on the 1853 memoir of a free man kidnapped and sold into slavery, and how he struggles to maintain his humanity. 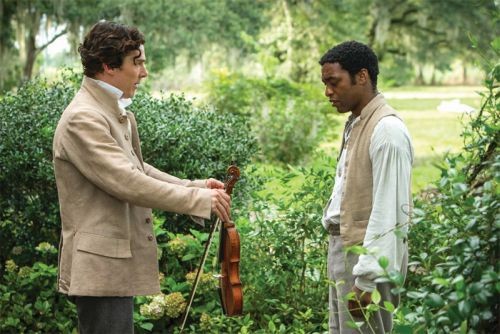 As Schindler’s List has shown, it is critically difficult to untangle the atrocities of history from the artistry of the director who attempts to bring them to the screen. Steven Spielberg’s much-lauded treatment of the Holocaust was flawed in both concept and execution, yet I would be lying if I said it didn’t, at times, leave me sobbing.

Steve McQueen’s 12 Years a Slave is equally imperfect, but it is, like Schindler’s List, a necessary film; perversely, made mostly by foreigners. Its director is British (of West Indian descent), its leading man is a Londoner (of Nigerian descent), and its main supporting actor is Irish (but German-born).

Only screenwriter John Ridley (an African-American from Milwaukee) and various smaller supporting roles draw from our local talent pool, which is, I guess, appropriate considering the long history of denial our nation has maintained about the damages of slavery and the stain it has left on our shared history.

Based on the 1853 memoir of Solomon Northup, McQueen’s film chronicles how this free black man and talented violinist (played by Chiwetel Ejiofor) is fooled by two white men into traveling from New York to Washington, D.C., where he is then kidnapped and sold into slavery. Stripped of his identity and viciously beaten into submission, he eventually becomes the property of a relatively benign plantation owner (Benedict Cumberbatch) who values him for his intellect.

Unfortunately, Northrup (renamed Platt) runs afoul of a sadistic overseer (Paul Dano) and must be sold for his own protection (and to repay a debt). This lands him with Edwin Epps (Michael Fassbender), who lords over his manor with a bible in one hand and a whip in the other.

Drunk, depraved and capricious in his brutality, he loathes his imperious wife (a terrific Sarah Paulson), mercilessly exhausts his plantation hands, and jealously obsesses over — as well as rapes — a young slave named Patsey (award-worthy newcomer Lupita Nyong’o).

Solomon becomes both a dehumanized witness to — and unwilling participant in — the extreme violence and bone-numbing physicality of slave culture. He shreds his fingers as he picks cotton, stumbles with weariness as he cuts cane, pretends to be illiterate to white men who can neither read nor write, barely survives an attempted lynching, and is forced to crack the whip on a fellow slave.

Through all the madness, he clings to his dignity. It’s an excruciating and inherently monotonous tale, and McQueen is blessed to have an actor like Ejiofor at its center. With a glance, the actor can convey fear, cunning, remorse or agony. It is an intensely soulful performance that balances Solomon’s instinct for survival against his fierce commitment to decency.

And while charting Northrup’s degradation, McQueen never lets us forget how the economy of the antebellum South was dependent on black sweat, muscle and blood. Human subjugation was as necessary as the water and sunshine that grew the crops.

And yet, for all the wealth it created, American slavery was a system that corrupted everyone and everything it touched, twisting human behavior and sentiment into something cruel and morally broken.

As a filmmaker, McQueen is no stranger to the humiliations of the flesh. His previous movies, Hunger and Shame, were compositional exercises in bodily agony, crafted with the unblinking yet aesthetic eye of a formalist.

Here, he attempts to provide both historical and personal context and purpose to his craft, and only partially succeeds. While 12 Years a Slave deserves praise for its outstanding performances and urgent, unsentimental approach, McQueen can’t quite bridge the gap between his meticulously crafted images and the emotional nuances of his characters.

For instance, Solomon plays the violin but we never get a hint of what it means to him. We understand his longing for his family but never with any specificity. The same goes of Fessbender’s and Cumberpatch’s slave owners.

As good as both actors are, there’s no sense of who these men are outside their scenes. What accounts for their contradictory behaviors? The film gives us plenty of emotion, pain and anguish, but little ambiguity or depth, which, in its way, dehumanizes a story that seeks to confront dehumanization.

McQueen imbues his film with undeniable artistry and intellectual rigor, but startlingly little passion. You will be angered, horrified and moved by what you witness in 12 Years a Slave, but you will not be challenged.

McQueen’s most beautifully shot scene poignantly illustrates how his impeccable aesthetics compromise our emotional investment. Solomon, desperate to conceal his education from Epps, sets fire to the letter he had hoped would bring him salvation.

We watch as the flames consume the paper and ink he struggled so hard to gather, until the last ember dies into blackness. It’s a gorgeously poetic moment, but one that chooses the symbolic death of hope over the look on Solomon’s face. Ejiofor is far too magnificent an actor (and Northrup too important a subject) to be left in the dark at such a pivotal moment.

Nevertheless, none of these criticisms should dissuade you from seeing 12 Years A Slave. In an era when you have prominent politicians like Michele Bachmann and Rick Santorum signing pledges asserting the lives of African-Americans were better during slavery than today, McQueen’s film becomes an important cultural rebuttal.

It may not achieve the greatness it deserves, but it is still a very good film; despite what some might say, the history of American slavery has been woefully underserved by Hollywood, making it all-too easy for revisionists to rationalize, rewrite or dismiss the moral darkness our nation once embraced.