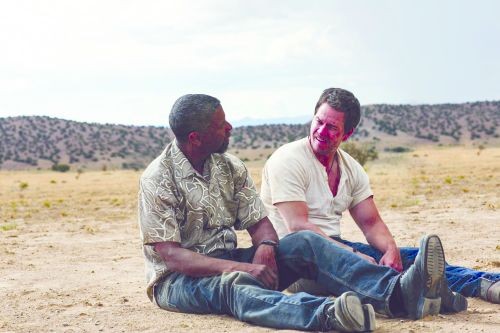 Generic, by-the-numbers buddy-action flicks don’t come much more generic than this forgettable project. Aside from the ample chemistry of its stars, this film is as disposable as the bountiful stream of shell casings ejected in the movie’s perpetual crossfire.

Somewhere under the haze of gun smoke and burning rubber are the well-matched duo of Denzel Washington and Mark Wahlberg, who throw constant wisecracks and punches at each other with breezy aplomb.

Just like the Red franchise, 2 Guns is based on a graphic novel series that nobody has heard of and relies on its charming cast to muscle through unbelievable shootouts and twisted exposition.

Washington is Bobby “I know a guy” Trench and Wahlberg is his motor-mouthed, trigger-happy partner “Stig.” Together, they operate as freelance smugglers, bank robbers and con artists, currently embroiled in a bad deal with flashy Mexican drug lord “Papi” Greco (Edward James Olmos).

Predictably, a scumbag-like Papi breaks his word and, just for kicks, throws the severed head of the guys’ favorite flunky into a bowling bag, which puts our already edgy guys in the mood for payback.

The twist is that both of them are really working deep, deep undercover — Bobby for the DEA and Stig for U.S Naval Intelligence; and since they are so damn good at their jobs, neither of them has figured this out after months and months on the road together.

Everyone talks a good game, but this is the kind of glibly sadistic movie where no one is as smart as they think they are, and where everyone is on the take and ready to sell each other out — from low-level thugs to admirals.

You can cut the cynicism with a butter knife as various crooks, liars and a host of federal agents (I know, that’s redundant) all scramble to outswindle and abuse each other in a search for stolen cash.

While the story rejects logic, at least there are amusing distractions, such as Bill Paxton, employing a Foghorn Leghorn drawl, as a sleazeball CIA operator. The anti-heroics are amusing — for a moment — until we realize that no one can be trusted, which blunts the surprises, and leaves a trail of double- and triple-crosses that are as confusing as a Tokyo subway map.

Washington seems to have a clause in his contract involving nude scenes with attractive Latinas (See: Flight, Training Day); in this case he’s between the sheets with Paula Patton, who looks great but is otherwise wasted in an embarrassingly underwritten girlfriend-in-danger role.

2 Guns is in theaters now and is rated R with a running time of 109 minutes.