Genre-juggling period flick’s awesome cast puts it over the top. 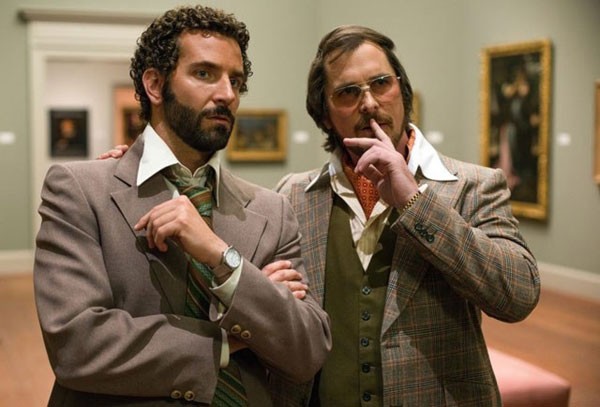 Disco glitter is transformed into fool’s gold in David O. Russell’s outrageously entertaining caper film, very loosely based on the real world “Abscam” busts of the late ’70s, but with an absurdist intensity that brilliantly smudges the line between true-crime and fiction. As a title card asserts, “Some of this actually happened.”

On his way to the top of the modern directing echelon, the dexterous Russell has shown mastery of multiple genres, and the delightfully bold American Hustle is simultaneously a con artist movie, a relationship comedy, a period piece, a social satire and, in a weird way, a noir. All of this chaos somehow works, because it’s been bundled as one of the smartest and funniest packages of the year. Despite being a famously difficult artist to work with, Russell has managed to develop an outstanding repertory company of stars, and Hustle is blessed with an absolutely stellar cast that’s able to will the movie forward when the complicated plot occasionally tangles around itself like a jammed cassette tape.

A scruffy Christian Bale leads the way, again morphing his body as the portly, comb-over-sporting Irving Rosenfeld, a smalltime grifter with grand ambitions and an oversized desire to be loved. He finds his conniving soul mate in Sydney Prosser (Amy Adams), a striking and sharp-witted former stripper with just as much drive and maybe a bit more grit than Irving. Their courtship begins with chitchat about Duke Ellington, and crystallizes when Irving offers her the spoils left over at one of the dry cleaning stores he uses as a front. They stand in the middle of a spinning rack of forgotten furs and ball gowns, discovering each other, enraptured in a swirl of discarded garments and borrowed glamour. It’s the film’s signature moment — romantic, gorgeous and pathetic all at once.

Together, they build a phony empire selling fraudulent bank loans and stolen and forged art to wealthy dupes, with Syd using her fake posh British accent and plunging necklines to complete the illusion. It’s all champagne and shag carpeting for a time, until our illicit duo gets nabbed by ambitious FBI agent Richie DiMaso, played with trademark manic enthusiasm by Bradley Cooper. The hyped-up G-man offers the con couple immunity if they’ll helped him trap the various big-money whales, congressmen and mobsters involved in building Atlantic City’s nascent casino trade. The prime target (and fall guy) for this operation, is Mayor Carmine Polito, the jovial, back-slapping boss of Camden. He’s played with surprising layers of warmth and comedic sympathy by action figure Jeremy Renner. Richie, with his teased curls and incandescent teeth, is all about appearances and building his reputation, no matter whom he tramples underfoot. His desire for status extends to Sydney, who he obsessively lusts for; she might actually sort of like the big goof, but she’s always canny to exploit pleasure for business’ sake. For all his slickness, Irving is a more vulnerable soul, and his weakness extends to the fireball young wife Rosalyn (Jennifer Lawrence) he can’t bring himself to leave, no matter how toxic their relationship gets. Rosalyn is a loudmouthed, boozy, self-absorbed disaster; and in a fit of jealous pique, foolishly cozies up to smooth talking gangster (Jack Huston), a move that endangers the whole operation.

Everything here simply grooves, from the fabulous soundtrack filled with perfect me-decade hits from the likes of Elton John and Tom Jones, to the spot-on period detailing, which adds an amusing coat of sleaze to the proceedings. When we stop giggling at the blown-out hairdos and flared collars, we are left to gaze slack-jawed at the brilliance of the whole cast.

Lawrence commits full-scale larceny, stealing every second that she’s on screen, and the volcanic hilarity and agility of her performance are nothing short of staggering. No one this young should this good, and she seems to be operating on a higher plane of reality than her contemporaries. Meanwhile, stating that Amy Adams is a good actress is like saying Lebron James can play some ball, but here Adams is such a slinky, sexy wonder, and her work so full of intelligence and heart that you can only be dazzled at the magic trick in progress.

Russell once made challenging bursts of comedic indie quirk, such as I Heart Huckabees, but he has evolved into one of a handful of directors that can be counted on to provide solid, respectable entertainment for adults, including The Fighter and last season’s awards-season darling, Silver Linings Playbook. Here he has elevated his game, and while there are hints of Scorsese, Lumet and P.T. Anderson in his style, Russell’s own frantic imagination wins out.

As in any movie about con men, there is the creeping sensation that we are being set up, but the deceptions in American Hustle are so breathlessly presented that we don’t realize until too late that the message is hollow. In this conflicted, deceitful capitalist fairyland, everything is a swindle, and everyone is on the take, but then the movie pivots and punishes one character a bit harshly for not being genuine enough. That’s the rub: This grown-up story is not so much about heroes as it is winners, losers and, most of all, survivors.

American Hustle is rated R, has a running time of 138 minutes and is in theaters everywhere on Dec 20.