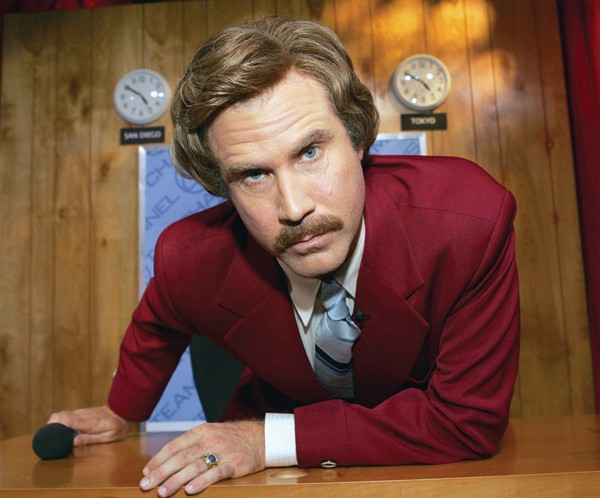 Anchorman 2: The Legend Continues | B
Are you aware there is an Anchorman sequel? I seem to recall seeing something about it — every time I’ve turned on the television, thumbed through a magazine, crossed the street or thought about purchasing a Dodge vehicle.

After an unprecedented media barrage, at long last comes the much-anticipated follow-up to the modest 2004 spoof that became a cultural juggernaut.

The swaggering, blowhard newsman Ron Burgundy has become Will Ferrell’s trademark persona; the perfect vehicle for his special brand of oafish absurdity and cartoon bluster. Of course, Ferrell usually plays some variant of the overconfident, noisy man-child, prone to fits of pointless rage and destructive clumsiness, but the perfectly coiffed, polyester-draped macho dinosaur stands on platform heels above the rest.

Maybe the “Cult of Anchorman” has grown in the last decade, because those funky ’70s fashions do half the work: telegraphing the ridiculousness of the character and inducing giggles before he even opens his mustachioed yap.

Whatever the roots of his popularity, Ferrell and his creative soulmate, Adam McKay, have hewn very closely to the formula of the original, putting Ron and his clueless, hard-partying crew through very familiar story beats; basically repeating gags and scenes with a casual disregard for plotting or momentum that makes the sequel an amusing — if not bloated and uneven — rehash.

There can, in fact, be too much of a good thing.

The film begins with a listless and extensive intro sequence where Burgundy gets fired from his NYC gig in favor of wife Veronica (Christina Applegate), then reunites his witless “News Team” (Paul Rudd, David Koechner and Steve Carell) for a job opportunity at a nascent 24-hour cable news outfit.

This was as mind-blowing a concept in the movie’s 1980 setting as a female anchor person was in the first installment. Period details like giant cordless phones and pinball machines are played for goofs, but there are also tons of anachronistic gags that expose a bit of laziness in the writing.

It’s not that there aren’t laughs in Anchorman 2, there are plenty, and some huge gut-busters, but the extended runtime and lack of focus betrays a smugness and indulgence that was less apparent the first time around.

There is also less novelty in watching Ferrell drunkenly stumble through a newscast, throw a massive tantrum or display caveman-level racial and sexual sensitivity. We get it. He’s a boob.

Carrell gets much more screen time, probably because his stock has soared since ’04. His sweetly sub-moronic weatherman, Brick, is best taken in small doses, though he does get a nice little romance plot with a welcome Kristen Wiig.

While buffoonery rules the day, the movie’s slyest, sharpest joke is that the clownish Ron pioneered tabloid journalism by giving viewers, “Not what they need, but what they want.” Burgundy’s idea of winning broadcast journalism are car chases, celebrity sex scandals, garish graphics and squirrels that can waterski.

It would be funny if it weren’t so damn true.

Anchorman 2: The Legend Continues is in theaters now and rated PG-13 with a running time of 119 minutes.