Why performing orcas kill, how the marine theme parks spin it, and what this all says about us 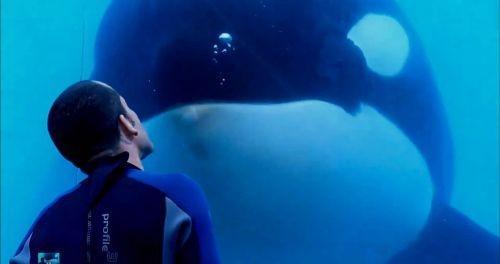 If you’re not moved and angered by what you see in Blackfish, your heart is made of harder stuff than mine. When it comes to the debate about whether orcas should be kept in captivity as amusement park attractions, there’s little doubt as to which side Gabriela Cowperthwaite’s gripping and heartbreaking documentary comes down on. But, frankly, is there really any other side? If so, the reps at SeaWorld aren’t making much of a case. Refusing to participate in the film, they hide behind press releases, media campaigns and misleading claims about the movie, advancing a pattern of denial that Cowperthwaite convincingly illustrates in her film through court transcripts, testimonies and old TV footage.

Constructed like a police procedural, Blackfish focuses in particular on Tilikum, a 32-year-old orca captured in the wild in 1983 and now living in Orlando’s SeaWorld. The six-ton whale has been involved in the deaths of three people — two trainers and a homeless man who snuck into the park after hours. Cowperthwaite presents Tilikum’s unsettling history — his capture at age 2; his time at Canada’s Sealand of the Pacific, where he killed trainer Keltie Byrne; his eventual sale to SeaWorld and then his role in the death of veteran trainer Dawn Brancheau — as a cross between a ‘whydunnit’ and whistleblower story, exposing a disturbing history of unethical corporate behavior.

Kicking things off with former marine park trainers and handlers sharing warm recollections of their job experiences (they have a lot less formal training than you might think), Blackfish then launches into a multi-pronged investigation into the history and practices of orca capture and captivity. Rallying behaviorists, neurologists, ex-trainers, eyewitnesses and even the seamen who captured orcas for marine parks for a living, Cowperthwaite makes a rational, well-researched and surprisingly emotionally restrained argument against marine parks like SeaWorld.

Blackfish doesn’t especially distinguish itself in form, relying on standard-issue talking-head interviews, archival footage, crude graphics and unconvincing impressionistic re-creations to make its point. But Cowperthwaite’s narrative approach is cunningly structured, carefully assembling persuasive evidence from a variety of sources and angles. There are the SeaLand veterans who describe Tilikum’s miserable living conditions and the SeaWorld employees who claim that they were left in the dark about the whale’s lethal history. There is damning FOIA evidence in a lawsuit brought against SeaWorld by OSHA for their disregard of human safety, and, of course, the theme park’s craven claims that “trainer error” is to blame for any injuries or fatalities. The most shocking footage — the attacks on the trainers — comes late in the film, long after Cowperthwaite has made clear that when it comes to corporate profits there is no morality, only self-serving rationalizations and public relations.
Ultimately, Blackfish is as much about our humanity as it is about the whales’ well-being. Despite our desire to anthropomorphize the animal kingdom, some creatures are not meant to live in captivity under any circumstance. The truth is, we do not, and most likely cannot, understand their emotional needs. Nor can we grasp the potential impact of turning them into performers for our entertainment. These majestic, powerful and temperamental orcas, with brains nearly four times the size of our own, deserve far more respect than the popcorn-munching crowds that surround their cramped swimming pools can afford them.

Blackfish is rated PG-13 and has a running time of 93 minutes.