Paul Walker’s last dance is a dumb-ass crime drama based in Detroit. 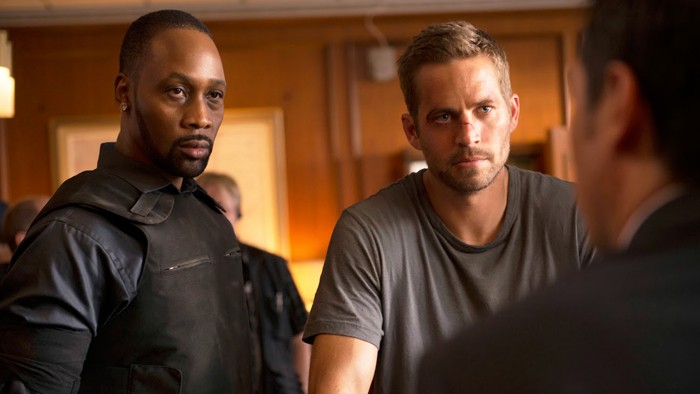 Today, the average big-screen depiction of Detroit is about as accurate as movies about Mars were before we landed probes on the red planet. Screenwriters (in this case Eurotrash actionista Luc Besson) love to use the Motor City as a great big rusted canvas to paint grand urban apocalyptic fantasies with zero connection to any actual city, living or dead. The very near future world seen in this empty-headed action-trash does not exist in our universe, but in a movie reality where leaping through window panes never causes cuts, all school buses have a trap door, and concrete is about as durable as papier-mâché.

The story is a lazy Americanization of 2004’s energetic District B13 (also produced by Besson’s EuropaCorp factory), which impressively showed off what was then the fairly new street trend of “parkour,” which involves leaping off and over all kinds of urban obstacles. But that earlier film drew discriminating audiences, whereas the marketing campaign for this shoddy remake will likely draw a dull matinee crowd.

As the last completed film with Paul Walker, Brick Mansions stands as a testament to the late actor’s physicality, stunt skills and easy charisma, if not his ability to land in better quality fare. Here the Fast and the Furious star plays another hard-edged undercover cop, forced to “go native” by teaming up with a wanted troublemaker on the inside of a criminal empire. Walker’s Det. Damien Collier has been tasked with infiltrating the titlular compound — a massive, disintegrating maze of low-income housing towers that has become so dangerous and crime-riddled that it’s been walled off from the rest of downtown. The dossier claims that local drug lord Tremaine (RZA) has gotten his hands on an old Russian short missile, one that he intends to use as leverage against the city administration that wants to bulldoze the whole area in favor of a shiny new redevelopment. (Sound familiar?)

Collier is all too eager to bust this nasty kingpin, whom he blames for the death of his noble cop father, but to tackle the army of strapped hoodlums inside the projects, he needs help from Lino (David Belle), a local who knows his way around and also has an ax to grind against Tremaine. The acrobatic Belle is a holdover from the French original, and his dizzying speed, agility, and balletic combat style are the picture’s highlight. Belle moves like Jackie Chan in his prime, but editor-turned-director Camille Delamarre blunts some of the exciting choreography with too many jarring jump cuts and distracting slo-mo shots. The fights are fun, as is seeing Walker’s exasperated response whenever his “partner” pulls off some remarkable, gravity-defying move.

The rest of the laughter is unintentional, as when the no-name Canadian bit actor playing Detroit’s mayor balks at the villain’s demands for $30 million, because “the city is running out of money.” This is merely one of the belly laughs in an absurd, awful, and derivative script full of logic gaps so massive even our limber heroes couldn’t leap across them.

Walker wasn’t the world’s best actor, but he was a dependable, likable presence, and he deserved better than this rubbish.

Brick Mansions is rated PG-13, runs 90 minutes and is in theaters now.