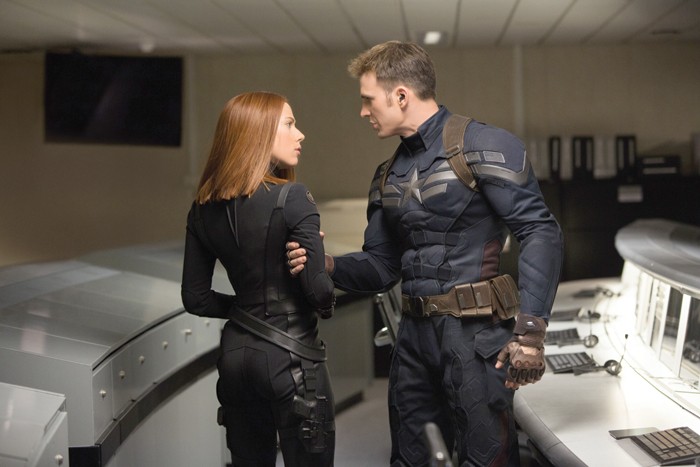 Captain America: The Winter Soldier | A-

Back in November you could start to feel the comic book movie fatigue settling in with the release of Thor: The Dark World. Oh, the movie was entertaining enough, albeit in a dumb, low-stakes sort of way, but after the relentlessly glum Dark Knight finale, the equally dour Man of Steel debut, and Marvel’s lackluster Agents of S.H.I.E.L.D., there was the sense the genre was reaching an inflection point, the beginning of a downward creative spiral.

Leave it to Marvel’s squarest superhero and Arrested Development directors Anthony and Joe Russo to zig when you expected the franchise to zag. Not only is Captain America: The Winter Soldier a savvy mix of pulpy popcorn action and political spy thriller, it also dares to upend the Marvel Universe’s apple cart, charting a new and potentially interesting narrative direction for the company’s interwoven mix of film, cable and television content.

Purposefully penned by Christopher Markus and Stephen McFeely (the Narnia movies, Pain and Gain), The Winter Soldier takes place soon after the events in The Avengers. Steve Rogers (Chris Evans), aka Captain America, is still a man out of time, struggling to put aside his WWII origins and embrace the modernity of 21st century America. It’s not an easy transition. With no wars to fight, he’s become an operative for the spy agency SHIELD, where even hostage rescue missions turn out to be a cover for extra-legal wet work.

Cap’s boss Nick Fury (Samuel L. Jackson) gives him a personal tour of the agency’s latest threat deterrent: Project Insight, where he learns that a trio of heli-carriers will patrol the skies, targeting every potential terrorist and evildoer. Cap balks. “This isn’t freedom,” he argues, “it’s holding a gun to everyone on Earth and calling it protection.”

Of course, things quickly go from uncomfortable to deadly when Fury is attacked. It doesn’t take long for Captain America to realize that SHIELD has been compromised and he must go on the run. Teaming up with the Black Widow (Scarlett Johansson) and newfound ally Sam Wilson (Anthony Mackie) — aka the Falcon — the trio must thwart the nefarious plot of an organization whose tentacles reach into the highest echelons of government. No one can be trusted and there’s nowhere to hide. Not even Alexander Pierce (Robert Redford), the SHIELD leader with the sterling résumé.

What distinguishes this standalone superhero flick is its ’70s-style political thriller overlay. While hardly the most incisive critique of unchecked surveillance, preemptive military action and the way our intelligence agencies abuse their authority (it is a comic book movie after all), The Winter Soldier earns extra points for attempting to insert some timely real-world ideas inside a Hollywood thrill-ride. It’s as gutsy as it is outlandish to suggest that our current U.S. foreign policy literally finds common ground with Nazi totalitarianism.

More importantly, this world of murky moral relativism and ethical shortcuts provides Steve Rogers’ notions of heroism and patriotism with an effective thematic foil. Much like Tony Stark’s Iron Man, Cap’s struggle to resolve his identity with his responsibilities helps bring his character into sharper focus.

Of course, for the fan-boys all this is just icing on the cake. The real attractions are the taut hand-to-hand action sequences and the big-scale finale. The Winter Soldier delivers on all fronts. Smartly keeping most of the fights grounded in reality and giving them just enough bone-crunching realism, the Russo brothers mostly avoid the weightless fakery of overwhelming CGI effects — until the extravagant last half-hour kicks in.

Until then, Cap and Black Widow’s tag team assault on a hijacked ship, a violent car chase through Washington, D.C., and a 10-on-1 elevator brawl are effectively up-close and visceral. It’s occasionally hard to track who’s doing what and where, but the overall impact is tense and exhilarating. Even when things explode in scale and grandeur, the Russos keep a steady eye on the characters invoked.

Less successful is the film’s titular villain. Though far more interesting than Thor’s vengeful dark elf, the Winter Soldier’s arc isn’t quite developed enough to have the dramatic wallop it’s aiming for. As presented, it’s more of an outline of a good idea.

Equally annoying is the fact that Cap’s on-the-run trio never calls on any of their Avenger pals for help. When Cap enlists Sam, he states that he can’t trust anyone. What about Hawkeye? Or Iron Man? Or the Hulk? If Marvel insists on having an interconnected universe of characters, then they need to do a better job of accounting for why some are left to save the world by themselves.

Despite these missteps, the film’s blend of top-notch action, well-timed humor, engaging leads and cleverly resonant plot makes it a superior all-around movie than the nonsensical rollercoaster ride that was The Avengers. Fan-boys, I await your pitchforks and torches.

Captain America: The Winter Soldier is in theaters now. It’s rated PG-13 and has a running time of 136 minutes.