The real-life hijacking of a cargo ship off of Somalia makes for a compelling celluloid treat. 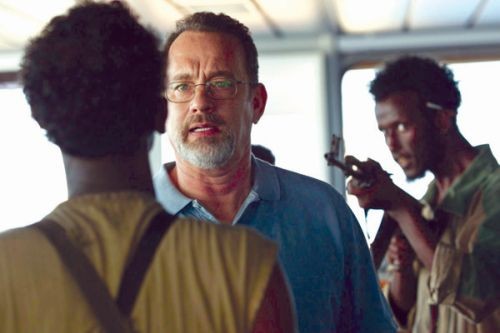 All thrillers operate on an expectation of violence, balancing our desire for safety with the innate desire for cathartic release that accompanies rattled nerves.

A thriller presupposes the audience goes in knowing that something dreadful is bound to happen; it’s an even safer bet when the movie is based on recent, well-documented events. All of which makes the sustained intensity and gut churning tension of thriller ace Paul Greenglass’s hijacking docudrama so impressive.

Tom Hanks gives a fine, un-showy and sublimely focused performance as Captain Richard Phillips, a veteran mariner possessed with a cool professionalism that doesn’t endear him to the crew, but does inspire confidence in his ability.

As skipper of the commercial freighter MV Maersk Alabama in 2009, Phillips is tasked with making a delivery of food and other supplies to Kenya, following a route that passes uncomfortably close to Somali waters. A spate of recent pirate activity in the area has the whole crew on edge and, soon enough, those fears are justified.

A few worrying green dots appear on the edge of the Alabama’s radar and it’s soon a race for the massive cargo ship to evade the tiny boats in hot pursuit.

On board the skips are a handful of armed and desperate Somali fisherman-turned-bandits, in service for a local criminal strongman.

These are young men left with no alternatives for a better life and willing to go to extremes in search of treasure and ransom money.

The American ship has no weapons and military aid is far away, making the prospect of capture very real and highly dangerous; Phillips and his crew try every possible way to survive and hopefully defuse the situation while waiting for rescue.

Eventually, it boils down to a conflict of wills between the captain and the pirates unblinking — and frightfully determined — leader “Muse,” played with surprising presence by acting newcomer Barkhad Abdi.

That the wiry, jackal-eyed rookie Abdi can hang in scenes with Hanks is frankly incredible, or perhaps just a testament to the Oscar winner’s ability to make those around him look better.

It helps that Billy Ray’s (The Hunger Games, State of Play) muscular script has been stripped down to bare bones efficiency, with all unnecessary narrative jettisoned in favor of forward momentum.

We are shown brief glimpses of Hank’s home life with Katherine Keener, and to the hijacker’s starkly impoverished and fraught village life, but only enough to underscore the gulf between them.

At its heart, this is a clash between the first and the third world; brought into uncomfortable proximity by the forces of globalization — and any hope of reconciliation or a happy resolution is lost once S.E.A.L team snipers finally arrive.

This was the then-new Obama administration’s first real crisis, and they faced it down with a steely determination and lethality that would come to define this president’s approach to the war on terror, for good or ill.

Captain Phillips pays little heed to politics other than in the abstract. Instead, the movie is content to charge forward with sweaty ferocity toward

its grisly climax, though it feels like there’s hardly a moment squandered along the ride.

Despite the machine-like efficiency of Greenglass’ editing (every bit as fast and flawless as his Bourne installments) human concerns and the tragic consequences of conflict are never far from mind.

Captain Phillips is in theaters now and is ratedR with a running time of 134 minutes.