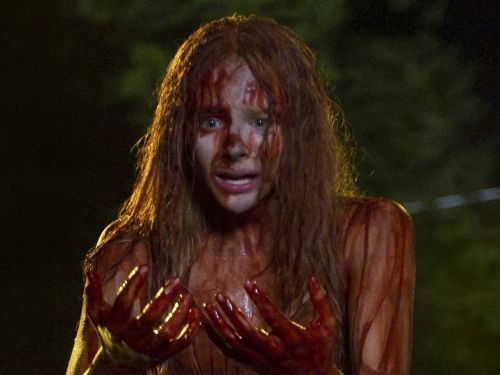 Crusty, seen-it-all movie buffs are often perplexed by Hollywood’s insistence on cannibalizing itself with remakes of seemingly anything faintly profitable and older than a decade, and in some cases just barely that.

Horror flicks seem particularly susceptible to recycling, with even lesser known titles like Fright Night andThe Crazies getting reboots, and pretty much nothing in the canon considered sacred. Not even Brian De Palma’s 1976 showpieceCarrie, a genre landmark loaded with indelible imagery and iconic performances, is considered off-limits. In fact, including a forgettable TV movie and a Broadway musical, this is the third or fourth attempt to recapture creepy classic vibes of the unique haunted prom queen’s splatterfest.

Chloë Grace Moretz (Hit-Girl in the Kick-Ass series) steps into Sissy Spacek’s very long shadow as Carrie White, the tormented and fragile girl with a deadly psychic secret. The always-skilled Julianne Moore has the difficult task of following Piper Laurie’s memorably intense performance as Carrie’s whacked-out religious fanatic mother. Mom is a deeply wounded, profoundly frightened creature, and Moore brings an innate sympathy that makes her more pathetic than truly terrifying. Likewise, Moretz, for all her fluttering eyebrows and quivering lips, displays more inner confidence than Spacek, who evoked an innocent, terrified rabbit, woefully unable to deal with the world. Meanwhile Chloe, who has thus far made her screen career by playing precocious badasses, her ultimate transformation from duckling to swan is less than shocking.

Indeed, surprises are hard to come by here, as director Kimberley Pierce (Boys Don’t Cry) follows the playbook so closely that many of the story beats feel perfunctory. The emphasis is on character work, but there is an overall softness that effectively blunts the fear, even as Pierce vainly tries to crank up the telekinetic slaughter effects in the climatic prom sequence. (The director’s decision of rewinding the “bucket of blood” moment three times, is the wrong kind of scream.)

Gone is the shock of the new that scared the elephant bells off ’70s audiences, and also missing is the nastier edge to the bullies that torment our heroine. Carrie’s snobby classmates, played by an attractive group of newcomers, fail to make much of an impression, though there is the nicely modern touch of having the head cheerleading bitch (Portia Doubleday, a faint echo of Amy Irving’s viciousness) posting cell phone videos of the infamous tampon bullying incident in the shower room. This is not enough to differentiate this remake, which is too slavish to be called a “re-imagining,” but too credible to really be a disaster.

Stephen King’s original story, the author’s earliest hit, has always been a brutally obvious metaphor for puberty, and the looming terror of adulthood, which has helped keep it relevant for new generations of teens, and facilitated this do-over. Yet despite a heightened sensitivity to issues of emerging womanhood, this is not quite the great modern feminist horror movie that noble attempts like Jennifer’s Body have failed to nail. There will quite likely be future attempts to re-launch this timeless tale again, but it might finally be time to let Carrie rest in her grave.

Carrie is rated R, has a running time of 100 minutes.