A thriller with tension, but without real, heart-jolting thrills. 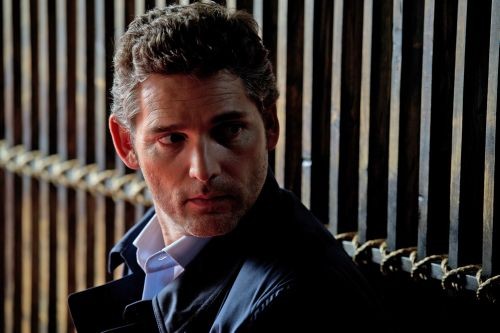 Thrillers, by definition should offer some thrills, but the scrupulously made Closed Circuit seems determined to conduct its international intrigue in a dignified manner that can scarcely be bothered to raise the pulse. This is a curiously colorless affair; with a gloomy London backdrop cast in gray on gray, reflecting the bloodless efficiency of the various bureaucrats that shuffle about advancing the plot with dutiful brusqueness.  Even the central romance here is a terribly British affair, wherein the putative lovers are drawn to each other but deeply resent ever having messy feelings at all.

The supremely unexciting Eric Bana stars as Martin Rose, a top-notch barrister who has inherited the unenviable task of defending a Muslim man who is a suspect in the bombing of a crowded public market. The case is so sensitive that not even Rose is privy to all the documents, so the state has assigned Claudia Simmons-Howe (Rebecca Hall) as a special advocate chosen to review the secret information and present it to the judge for admission in open court. Of course, because this is a movie, she also happens to be Rose’s former girlfriend.

The law says that counselor and advocate can’t communicate directly, but screenwriting convention dictates that they are soon meeting in abandoned alleyways and darkened hallways, to discuss both the intricacies of the case and also their murky romantic history. They begin to discover unsavory connections between the suspect and the U.K.’s domestic intelligence agency MI5, but what the exact motivation is remains unclear. The routine shadowy forces are at work here, continually exerting both subtle and overt pressure, as our stalwart, idealistic lawyers gradually begin to understand the depth of the dilemma they’ve found themselves in. Julia Stiles pops by to drop some clues in Bana’s lap, and the benevolently beaming Jim Broadbent as the attorney general, smoothly but forcibly asserts that there’s no way Rose is going to win this one.

Director John Crowley has previously made some smaller, interesting character pieces, such as the Michael Caine charmer Is Anybody There?, but he seems unable to make much of the terrorism vs. surveillance state themes, or to build any chemistry between the leads. There is a nice sustained note of tension throughout, but it’s only one note, plunked again and again as a dirge.

In its best moments, Closed Circuit evokes ’70s paranoid classics like The Parallax View and Three Days of the Condor but without anything particularly new or unique to add on to the old cynical story of how power corrupts.

Closed Circuit is rated R, has a running time of 96 minutes and is in theaters now. Watch trailer here.