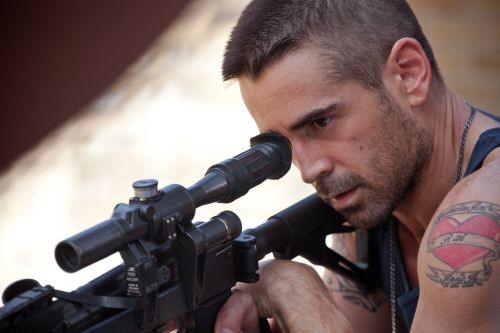 If you watch as many movies as I do, there is nothing more agonizing than the endless repetition of tropes, formulas and clichéd scenarios that seems to plague B-grade genre pictures. Yet, every so often, a movie comes along that so defiantly rejects the conventions of plotting, pacing and simple story craft that it stimulates long slumbering corners of the brain.

At various moments Dead Man Down is an elaborate revenge thriller, and overwrought crime drama, an action flick, and a bizarrely tender romance, and occasionally it’s all those things at once.

There is a central mystery to be unwound, but along the way the film presents many more imponderable questions.

Is Irishman Colin Farrell really playing a grieving Hungarian widower who pretends to be a Brooklyn-raised hood so he can infiltrate an underworld crew and destroy them from within? Is Swedish starlet Noomi Rapace (Prometheus) really playing a deeply hurt French beautician who is drawn to Farrell because she’s also seeking get revenge on the drunk driver who scarred her face?

Are there any police at all in this version of Manhattan? Or can you just crash cars, blow up buildings and have protracted shootouts with assault weapons all the livelong day without hearing a siren?

Did Dominic Cooper pick up his New Yawk accent from Bugs Bunny?

Is Terrence Howard’s vain crime boss going to keep talking and talking about killing people who cross him, or just start blasting?

Did they really just stop and have a heartfelt conversation about returning Tupperware in the middle of a tense sequence?

As taciturn thug Victor, Farrell plays it close to the vest, and he has a curious, inexplicable chemistry with Rapace’s scarred beauty Beatrice. These two damaged souls are probably the last two people who should possibly ever get together, but their tentative romance gives this brooding, violent, grimy little caper a much-needed bit of soul. For once, the love story is more compelling than the gunplay, and the script probably could have easily shed a few dangling subplots in favor of the lead couple.

Director Niels Arden Oplev teamed with Rapace on the original Girl with the Dragon Tattoo, and they at least attempt to recapture some of that kinky, mass-market-paperback goth atmosphere here. It never quite gels, but at least Dead Man Down’s intriguing mix of ingredients is unpredictable, which is entertaining in its own way.