Playing catch up with the times, this latest multilayered, ensemble-casted masterpiece-of-shit will raise your blood pressure or lower your eyelids. 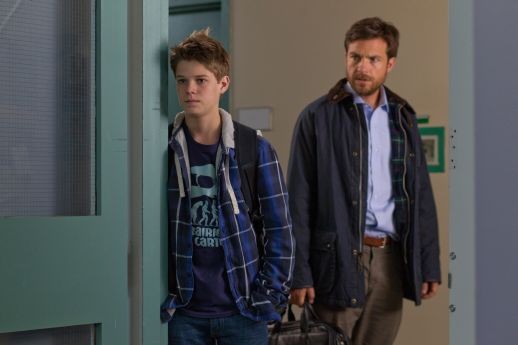 So, it looks like multi-strand, interconnected melodramas are now a thing. … Yippee. Why buy a ticket to one movie when you can see three? It’s not that these thematically interrelated compendiums can’t make for a good movie-going experience. It’s just that you’d better be a damn savvy storyteller to pull it off.

On the one hand, you’ve got Oscar-caliber flicks like Traffic, Syriana, Magnolia and the little seen, but well-worth seeking out, 13 Conversations About One Thing. On the other hand, you’ve got whatever Hallmark-infused crap Gary Marshall has been tasked with vomiting onto the screen (Valentine’s Day, New Year’s Eve). Somewhere in between are artfully pretentious efforts like Babel, 360 and Crash ¾the Best Picture Oscar winner everyone loves to hate.

Disconnectedwants to be the Crash of online culture. It wants to be it so desperately that director Henry Alex Rubin (Murderball) mimics both Paul Haggis’ slick visual style and interminably synth-y soundtrack. It’s not enough to distract us from a pacing that’s maple syrup slow (thrill to the sight of people typing!) and a script that is as overbearing as it is predictable.

There are essentially three colliding plot lines: In the first, Colin Ford is Jason, a teen who maliciously decides to prank Ben (Jonah Bobo), a shy but artistic classmate. Posing online as “Jessica,” he and his pals convince Ben to text them naked pictures. Of course, the photos go viral and Ben, devastated, does something rash. This leaves his television attorney father (Jason Bateman) setting out to find his son’s tormenter.

In plot line No. 2: Jason’s dad (Frank Grillo) is, “ironically,” a private investigator who specializes in identity theft. His latest case is a young married couple (Paula Patton and Alexander Skarsgard) still mourning the death of their infant son. Because both husband and wife have been careless about their online activities, a spammer has gained access to their bank account putting their home in jeopardy. Taking matters into their own hands, the couple decides to personally confront the man they believe has wronged them. What could possibly go wrong with that?

Meanwhile, in the third vignette, a hot young news reporter (Andrea Riseborough) at Bateman’s TV station has found her career-making scoop. She’s befriended an 18-year-old street kid (Max Thierot) who makes his living via a sex-cam site. Shacked up in a sprawling, dilapidated house, he recruits other street kids (some obviously underage) for his shady, Eastern European-accented employers. Will his decision to become an anonymous whistleblower have dangerous repercussions? Does Comcast overcharge for cable service?

Of the three, Bateman’s cyber-bullying story probably has the most resonance, but writer Andrew Stern’s dramatic instincts barely rise above those of an after-school special on TV.

The actors infuse his treacle with convincing emotions and reactions ¾especially Ford as the guilt-ridden teen ¾but it’s all so derivative it’s hard to care. I dare you to keep from rolling your eyes when Bateman intones: “I think I text him more than I talk to him.” And pity poor Hope Davis, a top-notch actress who is given nothing to do as Ben’s generically distraught mom.

The other two storylines are a major step down from there. Riseborough’s character makes so many idiotic decisions that you want to get up from your theater seat and slap the screen. Skarsgard, on the other hand, is saddled with so much backstory ¾he’s an Iraq War vet, grieving for his dead son, failing in his marriage and a gambling addict ¾he struggles to pick a defining trait.

Not only is Disconnect’s attempt to address the way technology has unmoored us from each other and ourselves at least five years behind the conversation, it’s dramatic hand-wringing is mind-numbingly obvious.

There are no revelations or surprises to be had, no insights to be gleaned, just a parade of newspaper editorial-style lamentations disguised as profound cautionary tales. Truth be it told, I’d rather watch racism push Sandra Bullock down the stairs in Crash.