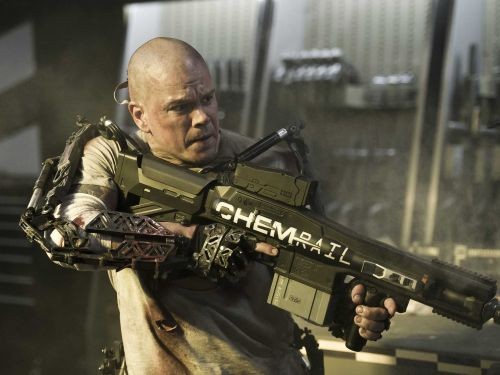 Though many pin the blame on the whiz-bang success of Star Wars, Hollywood science fiction films (or, more despairingly, Syfy movies) have long had a preoccupation with spectacle over ideas. Social commentary, high-minded intellectualism and the exploration of what it means to be human tend to be the exception rather than the rule. Alien monsters, exotic worlds and elaborate special effects are most often the focus, so when a film comes along with more brains than pixels, it’s a welcome addition to the genre.

South African filmmaker Neill Blomkamp’s District 9 was such a movie. With a morally complicated hero, an impish sense of satire, a story that offered up more than a few surprises, and an uncanny ability to evoke empathy for its shrimp-like aliens, the 2009 movie was an unexpected worldwide hit.

Elysium, Blomkamp’s new film, wants to follow in those footsteps but ends up stumbling into cartoonish social vengeance and lumbering predictability. It looks and feels impressive, has A-lister Matt Damon in the leading role, and actually seems to be about something other than explosions … but is undone by a script that bludgeons its audience with all the subtly of a grenade to the face — which, in fact, happens to one of the film’s characters.

It’s the year 2154 and there are two classes of people: the very wealthy, who live on a paradise-like space station called Elysium, and everyone else, who lives on polluted, overpopulated, crime-ridden Earth. In Los Angeles, which looks like a sprawling, post-apocalyptic favela, Max (Damon) is an ex-con gone straight. He works at a factory that assembles the security robots Elysium uses to keep the 99.9 percent in line and off their lush, green satellite. Accidentally exposed to a lethal dose of radiation, Max is given five days to live, spurring him to seek out the criminal hacker Spider (Wagner Moura), who will get him to Elysium’s miracle medical pods if he’ll pull off a high-stakes job for him.

Meanwhile, hardline Secretary of Defense Delacourt (Jodie Foster) is growing increasingly impatient with the unwashed immigrants who want access to Elysium’s riches. Fed up with spineless politicians, she plots a political coup with the aid of billionaire CEO John Carlyle (William Fitchner). Carlyle is capable of rebooting the space station’s computers and is also, coincidentally, the man Max has been tasked to steal data from. When Max succeeds, Delacourt sics her psychotic enforcer Kruger (Sharlto Copley) to retrieve the information that’s been downloaded into his brain.

Reading my plot synopsis, Elysium sounds like an ambitious and thoughtful bit of speculative fiction. Too bad the movie and the space station are as on-the-nose as you can get. The rich live far above, but not entirely out of view, of Earth’s sickly untouchable masses. The heartless tactics of homeland security, paranoia over undocumented immigration, and the poor’s desire for accessible health care are the thematic backbone of a by-the-numbers story filled with striking violence and gory mayhem. There isn’t a single plot point that doesn’t telegraph itself 10 minutes before arriving, and instead of honest character development we get a seemingly endless repetition of maudlin flashbacks. Damon, who is a convincingly compassionate actor, does what he can to make us care about his flawed hero but there’s little evolution to Max. He pretty much ends up where he started; a decent guy in a terrible situation.

Copley, on the other hand, pitches his performance at a caffeinated 11. Creepy and deranged, his sadistic Kruger dominates every scene he’s in, which adds a constant sense of life-and-death stakes but lacks even a hint of authenticity. The fanboys will love it.

Blomkamp’s idea of political parable is similarly bombastic, relying on Foster to sneer and spit every line with mustache-twirling villainy. Her rhetoric is so laughably post-9/11 that the movie’s subtext becomes ham-fisted text. The bad guys are just bad guys, without a hint of humanity. The good guys are conflicted everymen, forced to take up arms against the oppressive 1 percent. Blomkamp has no room for anything in between. FoxNews is going to have a field day.

On a technical level, however, Elysium is a cinematic triumph. Along with countless inventively destructive gadgets, Blomkamp has fashioned a convincing world of blood, grime and machines, finding shocking instances of beauty amid the dystopian spectacle. His pacing is first-rate, his action scenes pop with ferocious energy (though none matches District 9’s climactic showdown) and his attention to detail brings our bipolar future to tangible life.

Still, for all the visual thought and flair the filmmakers have put into the space station Elysium, we’re never provided with a tour of the place, never introduced to a citizen, and never given a sense of the life they live. It’s emblematic of the movie’s manipulatively simplistic approach to story and sociology. It’s easier to resent those we don’t see, no less understand.

Elysium is in theaters Aug, 9, and is rated R with a running time of 109 minutes. Watch the traier here.