An attack on Earth a half-century earlier sets the stage for a Harry Potter-like adventure in space. 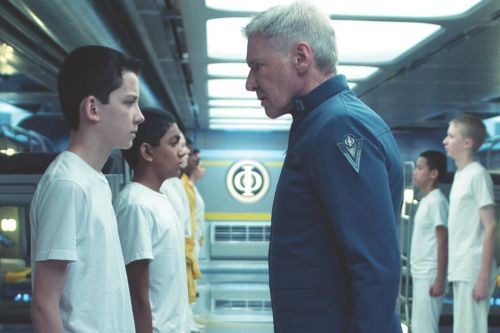 Director Gavin Hood would have done well to note the second word in his film’s title; Ender’s Game, for all its glossy special effects and laudable wartime moral questioning, lacks a fundamental sense of … thrills.

Adapted by Hood from Orson Scott Card’s 1986 novel, the first half of the movie is jam-packed with interesting ideas and “Harry Potter in space” aspirations. It introduces us to Ender Wiggin (Hugo’s Asa Butterfield), a 12-year-old prodigy in military strategy and tactics. Less sadistic than his older brother, and less empathic than his younger sister, Ender is the classic adolescent outsider — pale and soft-spoken — but destined to become the leader that Colonel Graff (Harrison Ford) imagines him to be. You see, 50 years earlier, an insect alien race known as the Formics attempted to colonize Earth and were rebuffed by a brilliant, self-sacrificing soldier. Still, millions of people died in the assault.

Since then, Earth’s military has been living in fear that its enemy will return. To prevent that from happening, the brass has concocted a scheme whereby exceptionally talented children are trained in an orbital “Battle School.” The theory is that their young brains better assimilate knowledge and are able to confront strategic conflicts with brutal imagination. It’s no coincidence that these adolescents, essentially child-soldiers, are also at a volatile and extremely impressionable stage in life.

Hood’s script is loyal to the narrative backbone in Card’s novel, but it jettisons subplots involving Ender’s siblings. As a result, it plays like a humorless mash-up of Starship Troopers and The Last Starfighter.

But where those movies had an impish tongue-in-cheek sense of humor, Ender’s Game is stiff and serious. A glum post-9/11 pall hangs over the narrative, as Earth’s adults still reel from the alien’s devastating surprise assault. The kids are earnest and determined enough, but their interactions lack the wit, heart and goofy charm that would connect younger audiences to their story.

Taking us through various training challenges at this interstellar Hogwarts, we watch as Ender outnegotiates and outfights various rivals, resulting in his promotion to battle commander. It’s engaging in a superficial way, but Hood never presents the tactical scenarios with any sense of what’s at stake. As a result, the film’s middle section lacks both urgency and tension.

Unlike, say, the zippy Quidditch matches in Harry Potter (which were still part of the mix even as the films grew darker),Ender’s otherwise cool zero-gravity combat games are fairly joyless, more concerned with highlighting the protagonist’s evolution into leadership than providing memorably entertaining set pieces.

This problem is further compounded when the finale relies on a pair of spectacular battle simulations as action centerpieces. The effects are impressive, but the conflict is uninvolving, lacking a sense of tangible threat or victory. Only a final twist, which forces us to re-evaluate the entire premise of the adventure, achieves any resonance.

And this is where Ender’s Game stands out, challenging its target audience to contemplate the ambiguities of war. It’s a movie that has some serious ideas, offering a cautionary critique of pre-emptive war and how violence shapes children.

There is power in Ender’s realization that the military kept him blind to the moral choices he was making. Similarly, the movie avoids the triumphalism that typically accompanies genre films like this. Ender’s victories are presented as morally murky achievements. Only the unconvincing final bid for redemption at the end of the film rings hollow. It’s not that a hopeful ending can’t work, it’s that Hood botches the landing.

Much has been made of Card’s reactionary stance on homosexuality (he goes so far as to advocate segregation) and boycotts of Ender’s Game have been threatened. That would be an ironic shame, since the movie and novel offer up a persuasive case for compassion and tolerance of the “other.” Hood leaves that message muted but intact, and though Card seems unable to live up to the ideals in his book, there’s no reason audiences should be denied the right to succeed where he has failed.

Ender’s Game is in theaters now and is rated PG-13, with a running time of 114 minutes.