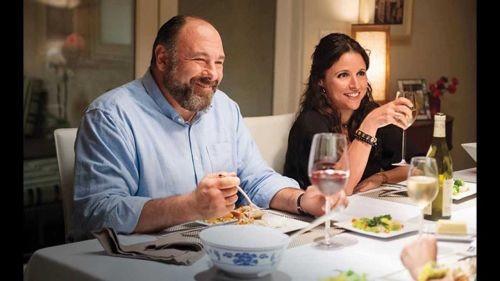 Watching the opening shot of Nicole Holofcener’s Enough Said, it becomes clear that the writer-director’s continued exploration of white suburban anxiety is tailor-made for audience members who, like the movie’s protagonist, drive Priuses. Or hybrid vehicles in general.

Over the last 17 years, Holofcener has specialized in smart, lacerating comedies that straddle the line between multiplex entertainment and art house fare. Offering up the privileged middle-brow sensibilities of Woody Allen, the complicated moral portraits of Eric Rohmer, and a quiet smattering of modern feminism, she specializes in the characters who say the kind of awful things that we’re loath to admit we have expressed in our own lives. In each of her five films, the conversations are sharp and clever, the subplots are attended to with care, and the narratives seem inspired by, well, sitcoms. Her latest is no exception.

Julia Louis-Dreyfus is Eva, an L.A. masseuse who’s still bruised from her divorce and dreading her daughter’s impending departure for college. After a chance encounter at a party, she starts dating Albert (James Gandolfini), a sweet guy but a bear of a man, a bit of a slob but remarkably charming. He is also a divorcee, and he’s apprehensive about his daughter’s move to New York for school.

At the same party, Eva meets Marianne (Catherine Keener), a stylish yet high-strung poet who first becomes her client, then her friend. As Eva and Albert begin their unlikely yet well-matched romance, Marianne starts complaining about own failed marriage and her ex-husband’s myriad faults: his obesity, disgusting habits and sexual shortcomings. You get one guess as to who she’s talking about.

Of course, Eve’s belief that Marianne is like “a human TripAdvisor” for her blossoming relationship with Albert becomes the very thing that poisons her chance for happiness. To make matters worse, Eva, unable to face the prospects of an empty nest, forms an inappropriate bond with her daughter’s best friend, Chloe (blogger-turned-actress Tavi Gevinson). The laws of screwball sitcom storytelling, of course, dictate that the third act will hinge on a series of highly awkward confrontations followed by a too-tidy resolution.

Miraculously, Holofcener’s well-timed one-liners, compassionate writing, and first-rate cast (which includes Toni Collette and Ben Falcone) keep things fresh and engaging. Beyond the snappy banter, sly subplots and predictable storytelling, there’s a warm and affecting examination of how two mature people burned by past relationships struggle to find the trust, affection and understanding they really need.

Enough Saidmay not be as incisive as her previous films (Walking and Talking and Friends with Money are her best), and Holofcener has the unfortunate tendency of capping each scene, no matter how tender or revealing, with a knee-jerk laugh, but her bittersweet warts-and-all approach to character is remarkably effective, allowing us to see both the best and worst of ourselves in each situation.

And the movie benefits enormously from Gandolfini as its romantic lead. While the too-little-seen Louis-Dreyfus makes for a highly engaging lead and the cast is almost uniformly excellent (only Keener’s shrill and self-absorbed Marianne comes off as one-note), it’s Gandolfini who gives Enough Said its heart and soul. His portrayal of Albert, as a decent and funny man who is content with his flaws and warily re-entering the dating pool, is nothing short of a revelation. There’s a sense of history in his performance, and he elevates Holfcener’s most contrived moments with honest emotions. When finally faced with Eva’s doubt and deception, he quietly reveals Albert’s pain and dignity, saying simply, “I thought you liked me.” I dare you not to feel a knot tighten in your throat. It’s a moment anyone who has ever had their heart broken knows all too well. And realizing that this wonderfully grounded actor will no longer grace the screen with his talents, makes the heartbreak all the more poignant.

Enough Said is now playing at the Main Art in Royal Oak. It’s rated PG-13 and has a running time of 93 minutes. Watch the Trailer here.