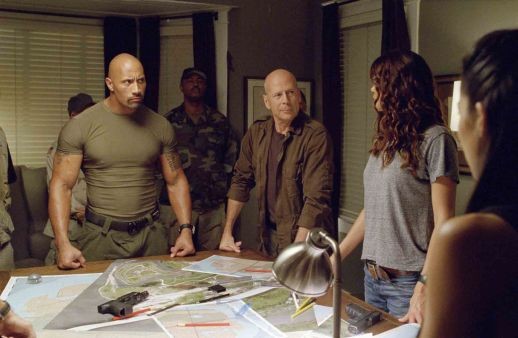 Welcome to Wayne LaPierre’s cinematic wet dream! Since the 1980s, Hollywood has had a serious hard-on for military hardware and gadgetry, depicting an ever-growing idolization for the implements of war. Which is what you get when you let 14-year-old boys dictate the content of your blockbuster season. Make no mistake, some of it is very entertaining. Spectacle for spectacle’s sake is as old as man first uttered the sound: “Oooh!”

But G.I. Joe: Retaliation is such a craven and relentless onslaught of obsessive gun fetishization that you half expect to see the NRA’s logo appear alongside Paramount and Hasbro. For instance, take the scene where we first meet the original Joe, played by Bruce Willis. With a home designed by Crate & Barrel and Guns & Ammo, we’re shown a marble-topped kitchen island with gas stove that flips up to reveal a matching set of machine guns. Cabinets, cutlery drawers and wardrobes act as compartments for enough automatic rifles and RPGs to arm the local National Guard unit. The Joes, led by Dwayne Johnson as Roadblock, excitedly ogle, stroke and fondle the weapons, like tweens first discovering their uncle’s porno stash.

I’m not going to bore you with the details of Rhett Reese and Paul Wernick’s unimaginative screenplay, but suffice it to say that the film jumps to locations all over the world as Cobra’s evildoers free their nefarious leaders from high-tech prisons, then initiate an elaborate scheme to drop nuclear weapons from orbiting satellites onto major world cities. The cartoonish G.I. Joes defend American democracy against these costumed superfreaks, thwarting their psychopathic desire for dominance and destruction. But not before the whole of London’s population (8 million at last count) gets offed with nary a tear shed.

Beefed up but just as stupid as its predecessor, G.I. Joe: Retaliation is criminally devoid of dramatic development or emotional investment, opting instead for quick expository exchanges, jingoistic declarations and fleeting moments of character bonding between the splashy yet generic action sequences. It’s essentially a two-hour live-action toy commercial that thinks Team America was a serious depiction of action hero awesomeness.

Worse, the movie dispatches its most engaging star — Channing Tatum’s Duke — early on. Sorry, but bringing on a bored Bruce “I’ll do anything for a paycheck” Willis isn’t much of a trade. And why does Hasbro have it in for the cast of Friday Night Lights? First the wretched Battleship chews up the careers of Taylor Kitsch and Jesse Plemons, now poor Adrianne Palicki does duty as the token female Joe, battling for equal consideration as Lady Jaye (a name that already sounds vaguely sexist). Elodie Young as Jinx doesn’t count because she’s more scenery than character.

But beyond the movie’s odious social underpinnings and thought-starved plotting, there is also the question of basic action movie competence. Except for a 15-minute mountainside battle in the middle of the film, the action in G.I. Joe Retaliation, which is non-stop in the worst sense of the word, is magnificently incoherent. Director Jon M. Chu, whose Step Up 3D demonstrated a nimble joy and skill for capturing the texture, rhythm and depth of dance in colorfully engaging bursts of energy, has

given in to the bland, edit-happy frenticism of ADHD filmmaking, unable to establish cinematic geography or narrative structure to his overblown action.

Only an audacious and dizzying cliff-side showdown between katana-weilding ninjas as they propel and criss-cross themselves across the side of a snowy mountain on ziplines delivers the vertiginous wide-screen goods. It’s theatrical and exciting and the only reason to see the movie in 3-D. But 15 minutes do not a movie make. And it’s certainly not reason enough to drop $10 on this .44 caliber wankfest of heavy weapon worship.