An emotionally walled-off writer discovers that love need not require a heartbeat. 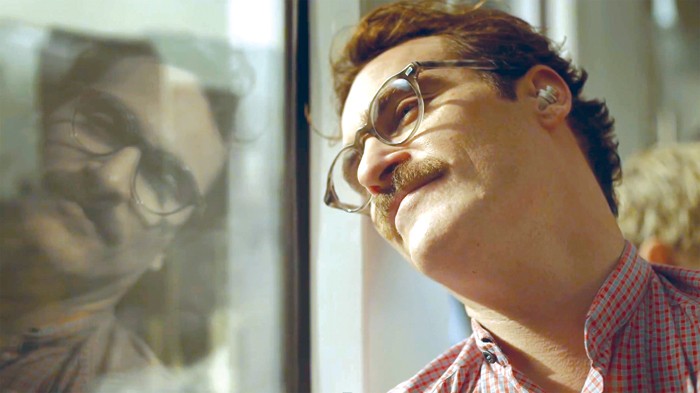 “… for the vast majority of American families, what seems to be the real point of life, what you rush home to get to, is to watch an electronic reproduction of life. You can’t touch it and it doesn’t smell and it has no taste. … It turns out to be this purely passive, contemplation of a twittering screen.”


It would be easy to assume that Alan Watts was commenting on our increasingly digitized and seemingly anti-social society — if he hadn’t died in 1973 — which is probably why director Spike Jonze decided to include him in Her, a delicately constructed existential romantic comedy that could be the filmmaker’s most deeply felt movie to date.

To be honest, I was unaware of Watts’ work before seeing this film, but after reading some of the pop-Zen philosopher’s essays about the state of human happiness in America, I can’t help but regard his inclusion in Her as a statement of purpose.

Jonze is reaching for something profoundly sincere with his fourth film, presenting a highly entertaining meditation on love. Her dares to ask what makes love real: Is it something you give or something you receive? Is it for now or forever? Can we find happiness in either?

The future may fall somewhere between a new urbanite dystopia and a soothing-but-soulless utopia, but matters of the heart remain the eternal ground zero of human existence.

Theodore Twombly (Joaquin Phoenix) is a closed-off, soft-spoken writer for the website BeautifulHandwrittenLetters.com. Buzzing with loneliness and insecurity, he pours himself into his clients’ letters; expressing passionately vicarious emotions for people he’s never met. Theodore then goes home to his sleek L.A. high-rise apartment, where he kills time playing interactive video games and having phone-sex with women he meets in online chat rooms. They are empty distractions from thoughts of Catherine (Rooney Mara), the wife he has avoided divorcing for nearly a year by not signing the papers.

Desperate for companionship, Theodore purchases the latest technological breakthrough: an operating system with artificial intelligence. After a few set-up questions, his computer seemingly comes to life with a female voice (courtesy of Scarlett Johansson) that is both disarmingly chipper and surprisingly spontaneous.

Calling herself Samantha, she quickly proves that she is light years beyond Siri, organizing his life and laughing at jokes in his email. Within days, the two are engaging in intimate conversations that last late into the night and, eventually, exploring the world together. Theodore grows from amused to smitten in a matter of weeks, while Samantha acquires deeper and more complex emotions.

Yes, Her is a movie about a man and his operating system falling in love. Remarkably, Jonze and his cast do such a good job of pulling you into Theodore’s world that you start accepting the notion that having a physical body isn’t necessarily required to having a romantic relationship … or even sex.

Jonze’s handful of films have all been preoccupied with loneliness and separation, filled with lyrically eerie affectations and desperately sad characters that yearn for intimacy.

Both Being John Malkovich and Adaptation were witty, wistful and creepy, balancing the misanthropic frustrations of Charlie Kaufman’s scripts with Jonze’s exuberance for whimsical snark. His highly underrated 2009 film, Where the Wild Things Are, introduced a level of tenderness that was new and achingly poignant. Charting the emotionally volatile terrain of a 9-year-old’s psyche is no easy task, and Jonze tackles it with passion and knowing sensitivity.

Her is a natural next step in his evolution as a filmmaker, displaying greater narrative patience and an all-too rare amorous grace. It’s an unabashedly romantic movie that seduces you — much like Theodore is seduced by Johansson’s exquisitely smoky voice.

Watching Phoenix’s walled-off character not only accept but embrace Samantha’s love is sadly beautiful. While his ex, Catherine, sees his relationship as a pathetic avoidance of the real world, his best friend Amy (the wonderful Amy Adams) reassures him that “falling in love is kind of like a socially acceptable insanity.”

Both make convincing arguments, but what’s abundantly clear is that although Theodore is not easily understood, Samantha is the one “person” who understands him. And even as her consciousness grows beyond what either of them imagined, their connection remains profound and true.

None of these romantic ambitions would be realized without Phoenix, who is one of the most emotionally and intellectually committed actors working today. His absolute dedication to Theodore’s vulnerability is what makes the movie’s more outlandish (and potentially awkward) conceits resonate. In particular, a scene involving a sex-surrogate could have gone horribly awry, but instead becomes a heartbreaking example of a lover going out on a limb to please her partner … and failing. Who hasn’t experienced that?

What makes Phoenix’s performance all the more astonishing is that he is alone for large portions of the film, reacting and interacting with an off-screen voice. There isn’t a false note along the way. The actor is also given the rare opportunity to show his comic chops in a hilarious phone sex scene with lonely, psychotic Kristen Wiig.

Johansson similarly impresses, using only her disembodied voice to convince us of Samantha’s playful innocence, raw insecurities and, eventually, soulful wisdom. She is giddy with first-love adoration and achingly wounded by Theodore’s jealousy and petty withdrawals (especially when she becomes intimate with a virtual reconstruction of Alan Watts), and we never for a minute doubt the authenticity of her personhood.

What makes the chemistry between the two all the more remarkable is that Phoenix is actually responding to actress Samantha Morton, who was originally cast as Samantha. Jonze later replaced her voice with Johansson’s, doubling down on the idea that it can sometimes be impossible to separate what is “real” from what is “virtual.”

While Her doesn’t strive for the relevance of the best science fiction — it neither explores nor even acknowledges the social, political and potentially world-changing impact of true artificial intelligence — and its first 40 minutes are a tad slow, what it has to say about the landscape of the mind and heart is both moving and lovely.

It’s fitting that, in the end, Samantha leaves Theodore with a printed book — just the kind of poetic gesture a romantic spirit like Jonze would imagine for the future — and one we could use more of in American cinema.

Her opens in metro Detroit on Friday, Jan. 10, and is rated R with a running time of 126 minutes.