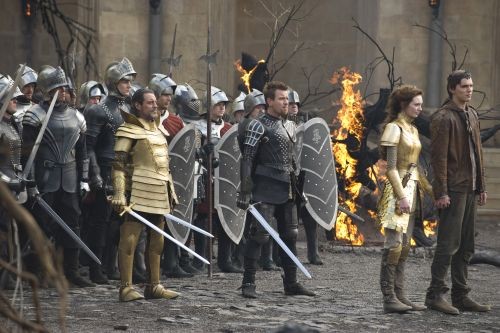 It’s clear from the unconvincing trailers that New Line’s marketing wing is as stymied as I am about what audience Jack the Giant Slayer was made for. Too simple-minded and bloodless for older, action-hungry audiences and too belligerent for young children, this mediocre fantasy adventure seems aimed at a rather narrow demographic — namely boys between the ages of 9 and 13. But at a price tag of $190 million, it’s hard to imagine how this passionless addition to the live-action fairy tale trend will recoup its investment. Then again, given the movie’s dumb-as-dirt plotting, action figure characters, and seen-it-before 3-D images, it seems tailor-made for an undiscriminating international audience.

Welcome to the Kingdom of Cloister, where the King (Ian McShane) is noble but clueless, his closest adviser (Stanley Tucci) is a scheming bastard, and his only daughter, Princess Isabelle (Eleanor Tomlinson), is one of those restless, independent types that likes to sneak out of the castle to witness how the other 99 percent live. Enter Jack (Nicholas Hoult), an amiable farm boy who trades his horse to a desperate monk for a bag of beans. See, the wicked Stanley Tucci stole the beans along with a magical crown that controls giants in order to … do you see where this is going? Suffice it to say, Jack spills the beans moments before Isabelle unexpectedly shows up at his house, and the Princess ends up trapped in Gantua, the land of the mythical giants. The King commands his best knight Elmont (Ewan McGregor) and “trusty” adviser to lead a team up the beanstalk to rescue his daughter … which, of course, includes Jack. Why? Because that’s what the script demands.

More a craftsman than an artist, director Bryan Singer (X-Men, Mr. and Mrs. Jones) seems to be emulating the Sinbad movies of the late ’60s and early ’70s in tone, rather than delivering yet another hipster update of fairy tale legends. It’s a refreshingly old-fashioned and unpretentious approach, but the storytelling is so relentlessly derivative that he has a hard time bringing anything new to the game. Even the special effects, which are hit or miss, lack invention or personality. Aside for the beanstalk itself, nothing really impresses, and the battle scenes are mostly just noisy set pieces that lack personal stakes. You’ve seen one CG castle siege, you’ve seen them all.

What little originality there is comes from character nuances. As the hero, Jack is pleasantly devoid of bravura or bloodlust, content to let others lead the charge but always engaged. McGregor is both dashing and surprisingly big-hearted as the valiant knight. Even the giants, led by the two-headed Fallon (Bill Nighy), are given a modicum of agency and culture. But none of these things can overcome a bland movie that has only two speeds — sluggishly paced setup and move-it-along plot complications. Perhaps its greatest flaw — spoiler alert — is that it offs its main villain too early, leaving the giants with little more than an attack-and-eat-the-tasty-humans agenda. Surely, the film’s three screenwriters could have come up with something more ambitious than that.

Equally problematic is the relationship between Jack and the Princess. Hoult is a likable talent who manages to keep his character’s gee-shucks awkwardness engaging, but he simply has no chemistry with Tomlinson. A good part of that is the script’s fault — the actors barely pass two dozen lines between them.

In the end, Jack the Giant Slayer is a case of commerce trumping creativity, a movie made solely to land a healthy weekend box office then move on to the global market for a return on its investment. As a business strategy, it makes sense. As an instance if cinema, it’s a bit depressing.