The Jinn are invading Detroit. The hipsters don’t seem so bad now, huh? 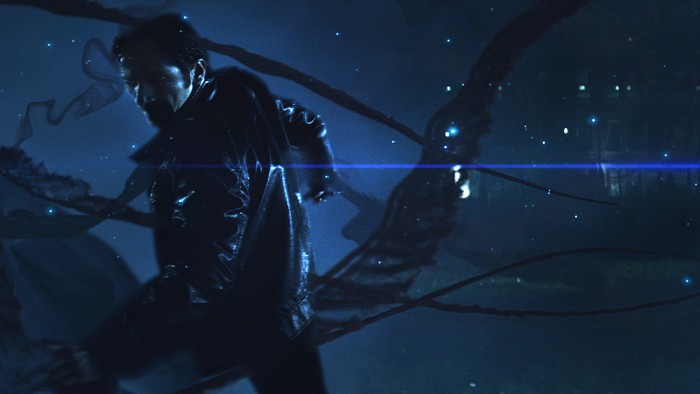 In just a few years, Michigan’s nascent film industry has endured more harrowing scares, glimmers of false hope, and shocks and surprises than the heroine of a splatter flick. So it seems weirdly appropriate that the latest film made here in the mitten would be a spooky tale about an automotive designer summoned by his higher spiritual calling, and beset by unpredictable and sinister powers beyond his control.

Homegrown writer-director Ajmal Zaheer Ahmad has pulled off something semi-miraculous: crafting a professional-looking supernatural thriller with tons of action, familiar faces, quality digital effects and ample visual flair, and getting it released in mainstream theater chains, all on a very modest budget. If only he’d developed a worthy script to go with it.

The story centers on Shawn (Dominic Rains) a dashing young automotive designer with a plush Ann Arbor home, a cool new muscle car (a beautiful black custom job called “The Firebreather”) and a gorgeous wife (Serinda Swan). It’s all yuppie bliss, until Shawn starts hearing strange sounds in the night, smoke starts filling the hallways, and the furniture starts rearranging itself, Paranormal Activity-style. Soon our hero finds himself getting a crash course in mythological exposition from a Catholic priest (William Atherton) and a shadowy, kung-fu kicking demonologist played by stuntman and actor Ray Park. Turns out the nasty creatures haunting Shawn are called “the Jinn,” an ancient race of fiery creatures that are the inverse of angels, and now want to reclaim the status they enjoyed before humans rose to dominance. As is so often the case in these sorts of affairs, there is a prophecy declaring a “chosen one” will rise to challenge the evil creeps, and, willingly or unwillingly, Shawn must become mankind’s protector.

The Jinn are a traditional part of Arabic folklore, but Ahmad doesn’t get much mileage out of that, and he fails to exploit many other interesting chances here. It’s nice to see the game Atherton, famous for playing ’80s weasels and jerks like the Ghostbusters’ EPA nemesis, but there’s hardly even a wink in that direction here. Ray Park’s fight choreography is solid but, when he opens his mouth, it’s clear why his most popular roles (like Snake-Eyes in G.I Joe) are mostly silent. Specialty makeup effects ace Robert Kurtzman (Army of Darkness) gives the Jinn an effective, smoky look, but they frequently just stand around hissing ominous threats like pro wrestlers cutting promos.

Devoid of any sort of intentional humor, the film dutifully lumbers forward through long-winded explanations, relationship drama, car chases and fight scenes, all presented with the glossy polish and seriousness of an ad for financial services.

As heartening as it is to see a local guy with Ahmad’s ambition, it’s heartbreaking to see his hard work disintegrate into a poorly edited mishmash of half-cooked ideas, clichés and unfulfilled visions. Sadly, the whole thing feels like an extended trailer for a movie that never starts.

Jinn is rated PG-13, has a run time 97 minutes and is in theaters now.