New biopic looks at the life of Steve Jobs but suffers from low resolution. 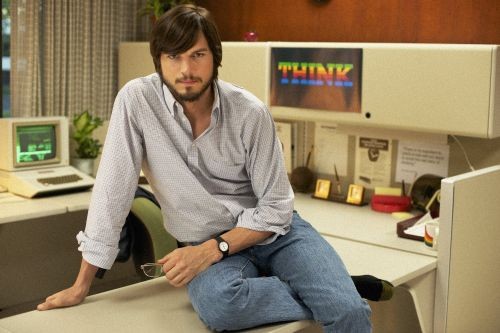 Here is the life and times of an endlessly innovative creative visionary, a man of imagination who would accept nothing less than perfection from himself and those around him. And it’s all presented with the most focus-tested, conventional, inside-the-box filmmaking techniques imaginable. Beginning with a soft-lit intro in which a beatific older Jobs (Ashton Kutcher), his black turtleneck tucked firmly into his mom jeans, serenely takes the stage to introduce the revolutionary Ipod, the movie follows all the usual biopic prompts. We learn how Steve, an ambitious and restless college dropout, drove Apple computer from a shaggy startup in his Dad’s suburban California garage, to the most profitable and vastly influential corporation on the planet.

Through a cascade of gauzy sunshine and Cat Stevens music, we see the young and barefoot Jobs circa 1974 picking up coeds, auditing calligraphy classes, and taking drug-assisted spiritual trips to the edges of perception, and also physical trips to India, with all its pretty colors and messy street life. Back home, the intense, anger-prone programmer splits from his gig at video game pioneers Atari to launch his own risky venture in his dad’s garage. Josh Gad neatly plays Apple co-founder Steve Wozniak as a shy, brilliant geek with abundant technical skill but none of Jobs’ charisma and drive. Together, along with a small crew of brainy oddballs, they set out building primitive-looking circuit boards and processors for the nascent home computing field, a market that didn’t really exist yet.

In perhaps his best screen work (and that is not saying much), Kutcher nails the tech titan’s famous mannerisms, his pursed lips, his nasally Californian drawl and the stooped-forward walking posture of a man perpetually in a hurry. It is a compelling impression, but one not backed up with enough insight to really explain Jobs’ exotic internal operating system. As charming as he was, he was also a ruthless businessman and a glory hog with a comically short fuse and deeply lacerating wit, and he routinely turned his back on friends, lovers and employees when they became too distracting. He even refused to acknowledge his daughter Lisa for much of her childhood, though he named a new Apple model after her in guilt.

While it doesn’t shy away from the hero’s darker shades, Matt Whiteley’s script also displays extreme reverence for Jobs’ mind and accomplishments, and also for corporate legend.

Repeatedly, execs and programmers present themselves to the camera and announce their names — “I’m Burl Smith” — as if they were the lineup of the 1927 Yankees, or as if Apple fanboys were excitedly trading their player cards. Other folks are compressed or omitted entirely. Bill Gates, who had a long, conflicted relationship with Jobs, is relegated to the other side of one angry phone call.

The latter portions of the movie become a continuous string of boardroom conversations, as fine character actors such as Matthew Modine, J.K Simmons and Dermot Mulroney clash with and try to maneuver around the mercurial innovator. Women are an afterthought in this high-tech universe.

The suits never understood him, but I don’t think ham-fisted director Joshua Michael Stern knows all that much about his subject either, as he layers on the inspirational music. Since Silicon Valley and Hollywood love a duplicate, Aaron Sorkin (The Social Network) is working on his own Jobs biopic, and we can hope it will be subtler than this. The message of Jobs is that we must learn to embrace unconventional thought, to identify a genius when one is in our midst, and to let him proceed with the business of changing the world. It would probably be better if the hack movie makers got out of the way first.

Jobs is playing in theaters now, and is rated PG-13 with a running time of 133 minutes.