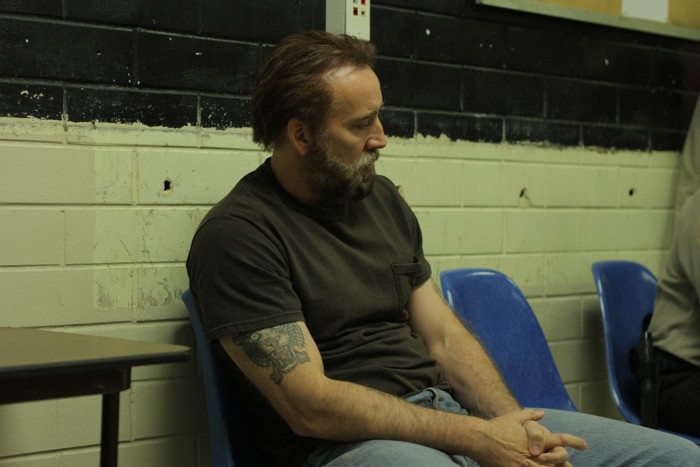 Nicolas Cage shambles around like a mottled old grizzly bear with a thorn in his paw as Joe Ransom, a wounded small-town ex-con with a heart as big as his rap sheet. He’s recovering but still profoundly flawed, prone to drinking, brawling and whoring, but possessed of a sort of stumbling, savage grace. He understands the value of hard work, but even his job is shady — he’s foreman of a crew that sneakily poisons perfectly good trees, so that a development company can then replace them with more lucrative varieties. It’s a dirty job, but it allows Joe to employ roughly a half-dozen misfits who would otherwise be left to fend for themselves in this hardscrabble environment.

The newest team member is an eager, determined but unpolished teen named Gary (Tye Sheridan), who badly needs cash to support his abused sister and shell-shocked mother. The family squats in a ramshackle cabin, where they wait out the periodic rampages of their monstrous paterfamilias (Gary Poulter), a vicious, worthless, drunken wreck who calls himself “G-Daawg.” The last thing Joe wants to be is involved, but he gradually begins to serve as a surrogate dad to the boy, and while he continues to clash with the cops, his live-in girlfriend, and a jealous scar-faced rival (Ronnie Gene Blevins), he becomes a reluctant shepherd, knowing he has to do what must be done to protect the weaker flock around him.

As Neil Young once said, “rust never sleeps,” and that’s certainly the case with the murky, rotting rural landscape depicted here: a sadly neglected world where decay has infested deep into all things.

Director David Gordon Green, who alternates between big-budget stoner comedies (Pineapple Express) and intimate indies (All the Real Girls), seems to believe that there’s tremendous beauty buried beneath all that muck, and behind all the physical and spiritual ugliness on display. Whether that hidden treasure is worth digging through all the dirt is another matter. For long stretches, the film plays out like a pageant of human misery, with damaged souls wandering lost in a junkyard of filth.

The setting and the tone recall Green’s earlier Southern gothic, Undertow (2004), and other modern borderline “hixploitation” films like Winter’s Bone, Mud and Beasts of the Southern Wild, but with an authenticity heightened here by the inclusion of non-actors, including the terrifying Poulter, a homeless man the casting director found on the streets of Austin who died after shooting ended.

Green has a tendency to wallow in the dysfunction, with lengthy scenes that tauntingly play with the same expectation of violence that Tarantino so often relies on. There are some truly repugnant players at work here, and we’re left in the uncomfortable position of rooting for Joe to unleash his rage on them, while vainly hoping that the big brute will find a better path.

That we care at all is a credit to Cage, seemingly liberated by the distinct lack of green-screen or exploding helicopters, and losing himself in the performance. It’s a reminder of his strange magnificence.