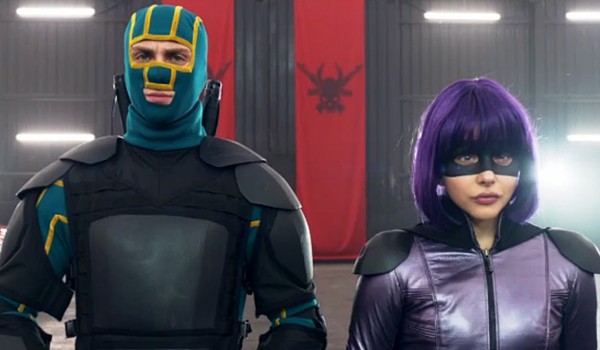 Extreme violence and outrageous comedy form an uneasy alliance in this outwardly enthusiastic but inwardly ugly comic book sequel, one that intermingles laughs and gore with an abandon rarely seen outside slasher flicks. The film includes shooting, gouging, animal attacks, a few decapitations and other atrocities, all wrapped up in a garishly bright and cheery package. This tonal inconsistency caused star Jim Carrey to turn his back on the carnage, refusing to publicize the picture, after a moral epiphany in the wake of the Stamford school massacre. Kick-Ass 2 might be a victim of bad timing and a shift in national mood, as innumerous disaster movies have brushed uncomfortably close to tragedies, but it suffers more from a debilitating case of sequelitis. The spunky young leads are back, and there are still cheap thrills to be had, but much of the surprise and freshness of 2010’s Kick-Ass has been lost.

The action picks up several months after the first installment, when the heroics of regular guy Dave Liswezki (Aaron Johnson) have inspired a host of costumed vigilante imitators. Some of these well-intentioned wannabes get organized and form a super team called “Justice Forever.” Their inspiring leader is a former mob enforcer turned born-again crusader played by Jim Carrey, who dubs himself “Colonel Stars and Stripes” and punishes criminals with his red, white and blue baseball bat and ferocious attack dog. The Colonel has his own twisted code of honor, but he’s not above getting ruthless with the gangsters and thugs the team has targeted. This squad of DIY crime fighters finds some success, though Dave can’t convince their most lethal potential member, Hit-Girl (Chloë Grace Moretz) to join them full time. She’s too busy as Mindy, her civilian identity, trying to survive high school, and fit in with a clique of popular girls that are almost as ruthless as the criminals.

These are the movie’s best moments, and a quickly blossoming Moretz continues to command the screen and impress with acting skills and intelligence beyond her years.

Meanwhile, Christopher Mintz-Plasse plays a dangerous moron called Chris D’Amico, who is bent on revenge because Kick-Ass killed his mob boss father with a bazooka. Formerly known as the Red Mist, grieving Chris goes full-on psycho, dons fetish gear from his mom’s closet, changes his name to something Richard Pryor used to pepper his sentences with, and then forms a super-villain crew with a name too extreme even for this rag.

Excessive carnage is a lot less fun in a world with real consequences, and the clever, meta-commentary on hero worship and nerd fandom that made the first film gets a drowned out here in the torrent of blood, hail of bullets, and ton after ton of crushing irony.

Kick-Ass 2 is now playing, and is rated  R with a running time of 103 minutes. Watch the trailer here.