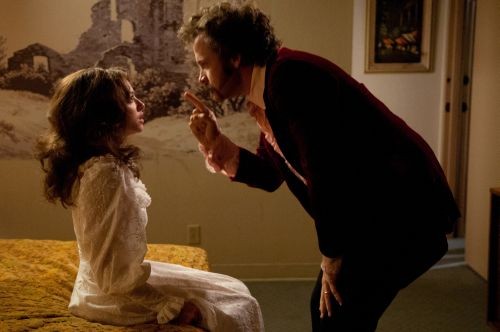 This not to say that Lovelace is high art, but it’s a passable biopic with a mildly ambitious narrative bent, one that would have surely been flattened by the clumsy antics of “La Lohan.” As it is, this origin story of the star of surprise box office smash of 1973, is compulsively watchable, even while being coated in a thick layer of me-decade sleaze.

The fabulous Lovelace was born Linda Boreman, a pretty young thing “discovered” while go-go dancing at a Florida roller rink. Her sketchy new husband is a low-rent Svengali named Chuck Traynor (Peter Sarsgaard) who maneuvers his new bride into nude modeling and ultimately into starring in a slightly more respectable brand of flesh flick called Deep Throat, which incredibly became a national sensation and the subject of endless editorials, public debates and Johnny Carson punch lines.

Seyfried is maybe too predictably pretty to embody Lovelace’s weirdly earthy sensuality, but she’s otherwise polished and game. Echoing Eric Robert’s in Star 80, the always intriguing Sarsgaard is impressively intense as the despicably needy and venial Chuck, but the character is so loathsome it’s hard to enjoy his creepy performance. Also saddled with an unsympathetic role is Sharon Stone as Linda’s arch catholic mother, who urges her daughter to obey the husband that is literally pimping her out to potential movie investors.

Lovelace is in theaters now, is rated R and has a running time of 92 minutes. Watch the trailer here.