A one-time spoof morphs into a feature-length film and yes, this is not a test. 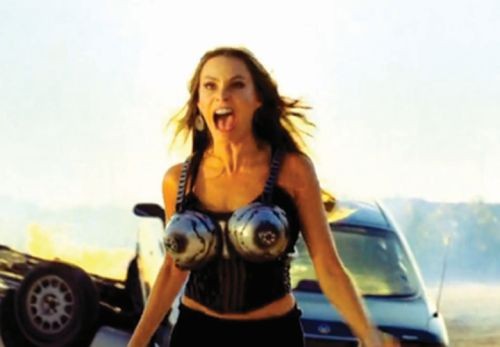 You’ve heard of beating a joke into the ground, but this pointlessly excessive, violent spoof-sequel takes the joke out behind the barn and bludgeons it into paste with a rusty shovel in the head.

“Machete” began as a funny little throwaway segment in director Robert Rodriquez’s half of Grindhouse (a movie that’s proven to be disposable, itself), but now that gag that has inexplicably been stretched into two feature-length films, with rapidly diminishing returns.

Ex-con turned character actor Danny Trejo plays the stoic title assassin, and he has a face resembling a gargoyle that’s been repeatedly blasted with buckshot.

That trademark ugly mug displays exactly two emotions: Grim resolve and mild alarm; though it’s very possible a hint of boredom creeped in there as well.

This time around, the mostly indestructible, blade-wielding renegade is offered citizenship and a full pardon if he can stop a crazed Mexican militant (Demian Bichir) from blowing up Washington D.C.

The snag: The baddie has the missile launch controls hardwired into to his chest, meaning Machete must keep his enemy’s heart beating, while surviving assaults from deadly drug cartels, a noose loving redneck sheriff, mercenaries, an identity shifting killer and a man-hating madam (Va-Va voom girl Sofia Vergara) with a machine gun bra, ala the Fembots.

Lurking behind all of this is a bug-eyed, scene-devouring Mel Gibson as a messianic tech mogul with a death wish and a Star Wars obsession.

There is a certain winking absurdity in the way Rodriguez has stocked the cast with seemingly every disagreeable diva, substance abuser, anti-Semitic ranter and unhinged nut job that Hollywood regularly shuns.

Assembled for one shoot, we have: Lady Gaga, Cuba Gooding, Jr., Michelle Rodriguez, Amber Heard and, billed under his birth name, Carlos Estevez —a.k.a Charlie Sheen.

I was half-expecting Katherine Heigl or Amanda Bynes to pop up, but instead got a cameo from noted Nazi cosplayer and tattoo/bondage fetishist Jesse James. The craft service table chatter on this project must have must have been a real scream.

The problem is that this all sounds a hell of a lot more fun than it turns out to be on screen, and there is a fake trailer for the threatened next installment that is more entertaining than the whole picture.

Director Rodriguez has always had a flair for action, though it’s increasingly unclear if his love of vintage exploitation garbage is all tongue-in-cheek, or a sincere reflection of his own limitations as an artist.

There are a few scattered giggles, but more often the stockpile of bodies and splattering blood becomes wearisome, and the intentionally convoluted plot grow impossible to follow —or smile at. The acting is meant to be awful, though with this mess of a script, and some of these bargain basement performers, who could tell?

Machete Kills is in theaters now and is rated R with a running time of 107 minutes.