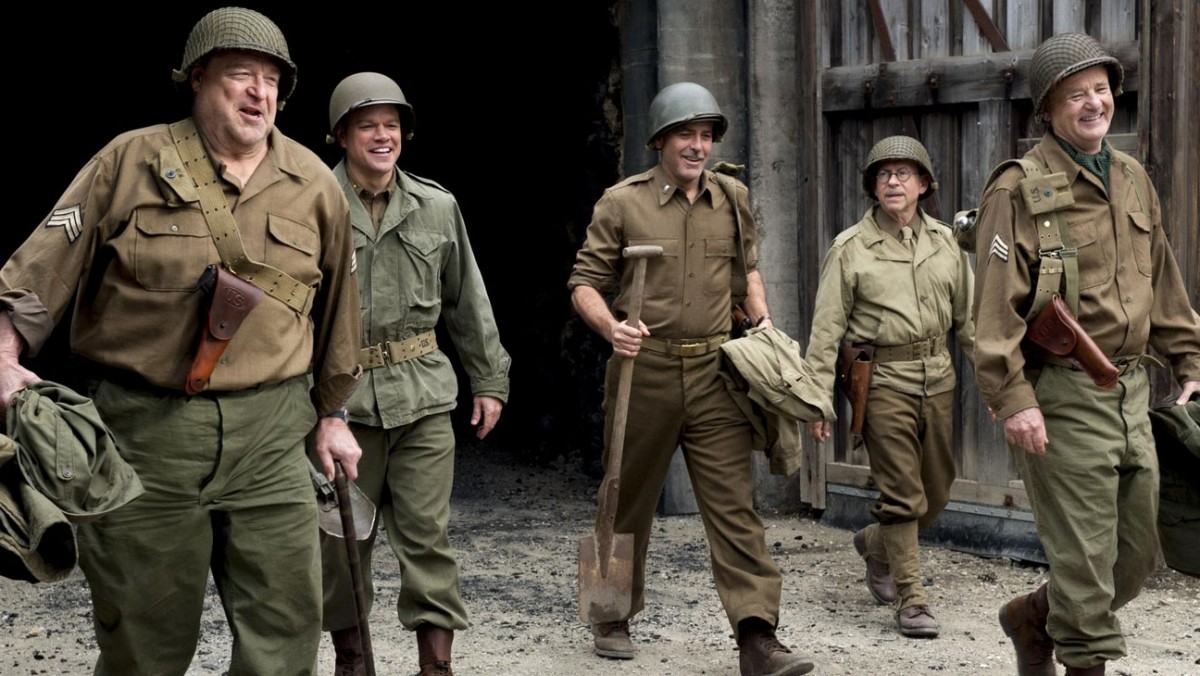 War used to be fun, or at least the old Hollywood version, in which jocular, back-slapping he-men like Van Johnson made combat bravery and foxhole camaraderie seem like a hell of a ride. George Clooney’s star-studded throwback The Monuments Men is an attempt to recapture a bit of that jovial, manly excitement of yesteryear, with unexpected dollops of solemnity and attempts at profundity awkwardly plopped into the mix. Like a stew with a few too many ingredients, the film is a noble effort that’s hard to swallow.

The trouble is that Clooney and co-writer Grant Heslov have discovered a fascinating corner of history, and found absolutely nothing new or compelling to say about it. Adapted from Robert Edsel’s book of the same name, the film fictionalizes the true story of a special World War II unit, tasked with finding, preserving and returning the vast collections of precious artworks looted during the conflict. Clooney leads the way as Frank Stokes, an art historian appalled by the devastation of so many of Europe’s priceless ancient landmarks, and by the amount of stolen art that he’s certain the Nazis are scurrying back to Germany with. With backing from President Roosevelt, Stokes assembles a team of graying art experts to find the lost treasure, and protect what remaining masterpieces they can from destruction in the chaotic last years of the war.

In real life, the “Monuments Fine Art and Archives Program” consisted of hundreds of skilled technicians and support staff, but since this is a movie, they are reduced to just seven oddball misfits played by loveable character actors like John Goodman, Bill Murray and the always-amusing Bob Balaban. The allies are represented by a genteel recovering drunk, played by Brit Hugh Bonneville (Downton Abbey) and a cheerful Frenchman (Jean Dujardin, star of The Artist) whose job is apparently to smoke cigarettes and grin like an idiot. Also on board is Matt Damon, though he’s quickly dispatched to Paris, to conduct a lengthy, quasi romance plotline with Cate Blanchett as Claire Simone, a prominent museum curator turned covert member of the French resistance. It’s difficult to resist all these charming performers, though the disjointed script rarely has them assembled at once, splitting them off in smaller groups on side missions, like the Scooby-Doo gang looking for clues.

The fractured narratives only complicate a tale that seems overcrowded and yet curiously underexplained. Much fuss is made over recovering the “Ghent altarpiece,” a 15th century classic by early Flemish master Jan Van Eyck, but Clooney can’t pause for more than a few seconds to explain its priceless cultural significance. The specific artistic expertise of each man also becomes irrelevant; we’re told that Murray’s character is an architect, but aside from glancing at some blueprints, this never amounts to anything. Unfortunately that sentiment applies to the whole project, which never sustains a rhythm or a tone for long, bouncing from maudlin to mildly comedic in an instant. These guys are not career soldiers, a point played for laughs, but their incompetence gets a few of them killed, leading to faux grand statements about nobility. The philosophical debate about the value of saving art at the cost of lives, is intriguing, but was better handled in The Train, a terrific 1964 Burt Lancaster thriller that’s also about the Nazis shameless art thievery.

There are some good moments, like when Clooney tells a captured enemy colonel that he’ll soon forget about him while enjoying bagels at his favorite Jewish deli back home, but here the German officer is mostly just a punching bag, and not a real menace like Christoph Waltz in Inglorious Basterds. In the end, The Monuments Men is watchable, but for all its good intentions and talented players, it simply reminds you of better art.

The Monuments Menis rated PG-13, has a running time of 118 minutes and is in theaters now.