Bruce Dern turns in a grand performance as a dissipated old fool chasing a false fortune. 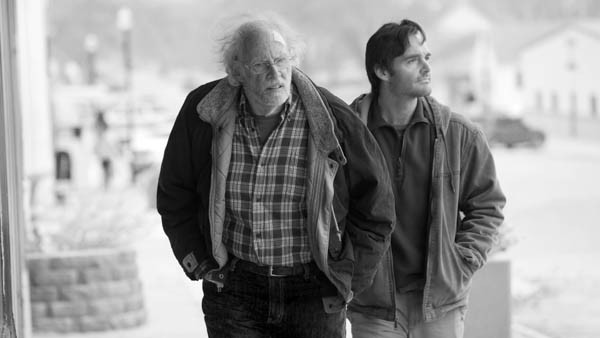 Time makes fools of us all, some bigger than others. When we first see Woody Grant (Bruce Dern), a Korean War vet and disheveled old drunk, he’s wandering alone along a Montana highway, growing a little smaller against the mountains as he edges toward the horizon. Woody is a vanishing figure in his own life too; a man on his way out, but not inclined to be graceful about it. He has a letter in his shirt pocket, a sweepstakes golden ticket assuring him that he’s a million-dollar winner who only has to get to the home office in Nebraska to claim his fortune. His depressed stereo salesman son David (Will Forte) knows that the sweepstakes is a scam, but he consents to drive his dad from Billings to Lincoln, if not just to shut him up and keep him out of trouble then to spend some time with the aloof father who remains something of a mystery.

What follows is the conventional movie road trip, presented with an unconventional amount of wisdom and sadness, and interspersed with bits of slapstick and pathos, all tied together by the uncommonly understated brilliance of Dern, a character actor famous for playing coked-up, tweaked-out madmen in the ’70s and ’80s. That lunatic energy is still in there, only now he’s just a little mellowed and dissipated, his rage turned inward, and he has to crank his hearing aid up a little to hear the voices in his own head.

Eventually, the Grants make their way to Woody’s tiny, dusty hometown, where various relatives, rivals and old friends treat him like a conquering hero returning with the spoils of war. They are just as ready to believe in his newfound wealth, and most are eager to try to get their share.

David grows increasingly frustrated by these venal, small-minded chiselers, such as Woody’s bullying former business partner (Stacy Keach), and he’s annoyed by his dad’s desire to push on with the fantasy, no matter what grim realities emerge. But there is also a gradual, grudging respect that grows out of their mutual commitment to this crazy adventure and, in the end, even a hint of grace. There can be dignity in defeat, if you look hard enough.

Director Alexander Payne, working from Bob Nelson’s economical script, and employing Phedon Papamichael’s stunningly bleak black-and-white cinematography to great effect, produces a slice of gritty, uncompromising but also deeply human satire. He has cannily cast former Saturday Night Live goofball Forte in a sad-eyed dramatic role, and also gets a terrifically funny and sharp performance out of sketch comic savant Bob Odenkirk (Breaking Bad) as David’s older, more successful brother. Comedians know better than anyone the razor-thin line between tragedy and comedy, and these gents are perfectly calibrated for it. The movies’ biggest laughs come from the mouth of June Squibb as Woody’s unforgiving wife; she’s a firecracker senior, with a hilariously unfiltered (and unpleasant) personality.

Payne, son of the heartland and darling of big-city cineastes, has built his career on chronicling regular lives lived in places that Hollywood rarely bothers to notice or begins to understand. In Payne’s work (Election, About Schmidt) earthy bluntness and Midwestern stoicism is often used as a punch line, and a few critics have bristled at a perceived condescension in his tone, what Time Out NY’s Keith Uhlich calls “Hixplotation sentimentalism.” They scorn the way Payne is merely sneering at unsophisticated, jerkwater yokels, milking them for cheap laughs and forced tears. Sometimes I really wonder if guys like this have ever set foot in the Midwest — and I don’t mean Chicago.

Payne certainly has: He was born and raised in Omaha, and has perfect, curious mix of love and resentment toward his homeland that is the native’s prerogative. He can take the piss out of the stark environment and barren cultural landscape of Nebraska all he wants. He’s from there.

Nebraska is rated R has a run time of 115 minutes.