Film Review: Now You See Me 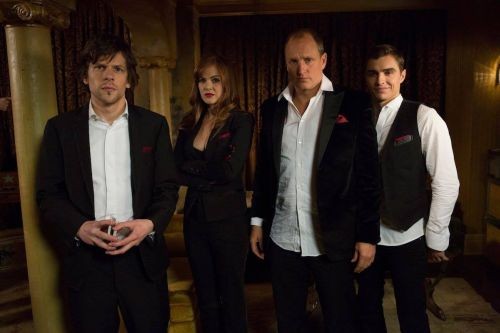 Movies are themselves merely illusions, a stream of still photos or — more technically these days — a code of ones and zeros strung together to trick the eye into seeing a moving image. So it’s a bit ironic that movies about old-fashioned stage magic always seem to be a bit of a hard sell with audiences. Just in the last few years, such films as The Incredible Burt Wonderstone,The Prestige,Scoop andThe Illusionist have all pulled off vanishing acts at the box office.

And now comes a relentlessly flashy, briskly entertaining and emptythriller loaded with familiar names and graced with a catchy high-concept premise — “magicians rob banks” — that is so elegant and obvious that you’ll be shocked you haven’t seen it done before.

Of course, you’ve seen much that happens in Now You See Me done before — and done better: the explosive action set pieces, the mismatched team of clashing egos, the dumbfounded cops, and the mysterious benefactor pulling the strings from the shadows. These all are fairly stock elements, though they are presented with enough flair to distract us for a time. The setup involves a disparate crew of con men and professional illusionists with an array of skills, all summoned by a mystery man and challenged to perform the grandest trick ever seen. The newly formed crew, dubbed “The Four Horsemen,” consists of smug Vegas illusionist Daniel Atlas (Jessie Eisenberg), petty con man and tricky hypnotist Merrit McKinney (Woody Harrelson), comely escape artist Henley Reeves (Isla Fisher) and young street hustling card sharp Jack Wilder (Dave Franco, look-alike brother of James).  With backing from a billionaire industrialist (Michael Caine) the Horsemen become a famous Vegas attraction, and then become infamous when they appear to rob a Parisian bank from a continent away, then make the money rain down on the stunned theater audience. Like a sparkle-dusted band of Merry Men — and lady — the team begins to pull more elaborate “events” designed to capture the hearts and minds of the little guy, at the expense of the fat cats, all while keeping two steps ahead of the law. Mark Ruffalo amusingly plays the dogged but perpetually stymied FBI agent on the tricksters’ ever-shifting trail, though he’s also got a curious eye on his fetching Interpol-assigned partner Alma (Melanie Laurent). Also suspect is cagey debunker Thaddeus Bradley (Morgan Freeman), who feeds the G-Men tips and hints, but seems to have an agenda of his own.

The endless stunts, chases, fights and double-crosses are big, smartly staged fun, though we can’t shake the sense that it’s all just misdirection. The patched-together script (by pros Boaz Yakin and Ed Solomon and others) is so stocked with red herrings that we are constantly aware the other shoe is about to drop, and if we don’t guess all the details of the final revelation, we have a hunch it’s coming. In all its razzle-dazzle, Now You See Me doesn’t engage the heart so much as fool the mind, and it’s a shame that a movie revolving around sleight of hand is itself so slight in meaningful character development.