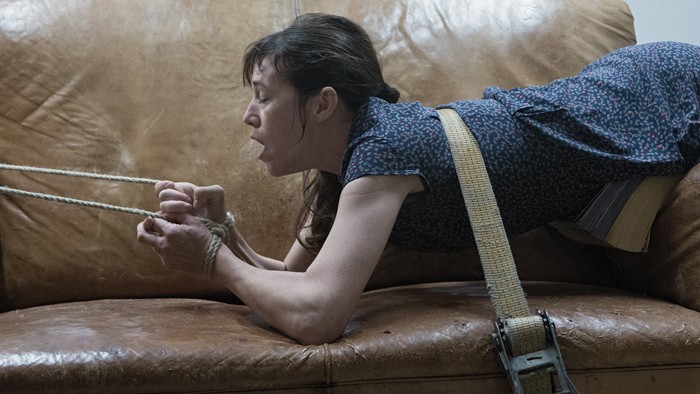 ‘He needs a female to provide his work soul. And he envies them and hates them for it. So he has to destroy them during the filming.’ —Björk talking about Danish filmmaker Lars von Trier

And it’s a lark that sits atop two hours of comic grotesqueries and visual pranks. Ever notice how Hollywood refuses to show the penis? Lars von Trier answers with a photomontage that includes every conceivable shape, cut and size. What music does he play when his sexually addicted protagonist, Joe, goes on the prowl? Why, “Born to be Wild,” of course. How about when she’s ruining the domestic lives of her lovers? That would cue “Burning Down the House.” It’s hard to tell if the director thinks he’s being witty or if he’s ridiculing the soundtrack of every film that’s come before this one.

Not all Nymphomaniac’s humor falls flat, however. There is an exquisitely staged black comic breakdown involving Uma Thurman as Mrs. H., a betrayed wife who asks Joe if she can give her three sons a tour of the “whoring bed,” the place where their father destroyed the family. It’s a hysterically embarrassing and ultimately heartbreaking confrontation that dangerously teeters on the brink of emotional madness, but damn if von Trier doesn’t squeeze a guilty chuckle out of you as the trauma and absurdity of the situation crash together.

It’s moments like these that make you wonder if Nymphomaniac is a comically explicit (if predictably sadistic) examination of sexual liberation, gender double standards, and the sociopathology of romance. That would be the generous position to take. But from von Trier (Melancholia, Dogville), a director known for his self-congratulatory odes to depression and self-destruction, any notion that the farcical contemplation in Nymphomaniac: Volume 1 is the end goal ignores the more probable scenario that he’s setting us up for the darker, more perverse and ultimately ugly revelations of Volume 2.

That is the problem with reviewing only half of a film that was meant to be presented in its 4-hour entirety. Whatever judgments you may make, they are only, at best, half-informed.

Nymphomaniac: Volume 1 presents the first five chapters of Joe’s sexual odyssey, opening in a dank alleyway, where Seligman (Stellan Skarsgård), an ascetic bachelor with a passion for math and fly-fishing, finds Joe (Charlotte Gainsbourg) beaten and barely conscious. When she refuses to be seen by a doctor, Seligman brings her back to his apartment to recover. Over tea, she confesses that she is a terrible person and when he asks why, she insists he must hear the complete story of her life to understand the answer. And so, like a depraved Scheherazade, Joe recounts her lurid sexual history, from her brutal and perfunctory first encounter with Jerome (LaBeouf) at age 15, to a life afterward dedicated to carnal conquest without love or attachment.

Through flashbacks, young Joe (played by newcomer Stacy Martin), is presented as an attractive, ambition-free, talentless vixen who orchestrates for herself an elaborate life of casual fornication. What starts with a teen competition to screw as many men as possible in a single train ride (the prize is a bag of chocolates) eventually leads to a girl cult that embraces the power of the vulva over the sentimentality of love. Eventually, Joe is the only member left standing, maturing into womanhood, where she juggles so many sexual relationships she has trouble keeping track of the men’s names. Joe confesses to dozens that they are the first to ever give her orgasm, ignoring their desperate bids for affection and cruelly deciding to cast them aside with the roll of some dice. And so von Trier once again presents sex, most especially when wielded by women, as a mercilessly destructive force.

At various points, Joe’s stories are interrupted by Seligman as he philosophically compares her behavior to mathematical equations, classical music and, of course, fly-fishing. And it’s between the uncomfortable promiscuity that we also witness Joe’s relationship with her dying father (Christian Slater), her cold-hearted bitch of a mother (Connie Nielsen), and her uncontrollable love for Jerome, who coincidentally re-enters her life at various points.

Unfortunately, von Trier isn’t good enough a writer to pull off his intellectual riffs, and the repetitive storytelling framing device becomes evidence of lazy plotting — though he tries to wink that his contrivances are deliberate, assuming that self-aware cynicism excuses him of a poorly realized narrative. More troubling is how close he gets to moments of real compassion and insight, only to suddenly lurch away from anything resembling raw human emotions. At the first sign of sincerity, he deflates to yet another ironic aside or one of Seligman’s analytical observations.