This sci-fi clunker could be when Tom Cruise finally jumps the shark  and every other ocean creature. 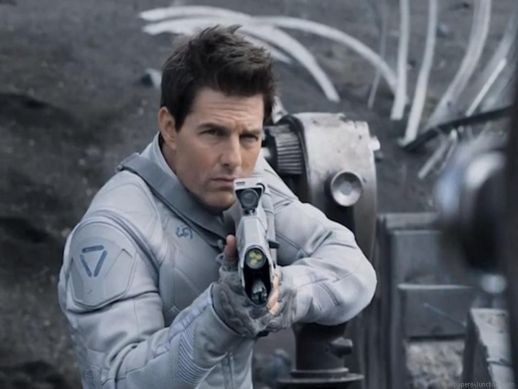 Tom Cruise portrays an extremely lifelike replica of a human in Oblivion, or at least what Cruise may imagine a regular human to act like, based on his careful observations. Still showing traces of boyishness at 50, the remarkably well-preserved star continues to play the role of heroic everyman, even though his own bizarre, tabloid fishbowl lifestyle has long alienated him from the mass audiences that ensured his fame and vast wealth.

With his armored silver flight suit and wraparound sunglasses, Cruise makes a very dashing spaceman. Jack, along with his dispatcher, nurse, aide and sex doll Victoria (Andrea Risebourough), live in a glass-and-chrome condo in the clouds, high above the ruined wasteland of Earth 2077 ¾60-odd years past a devastating war with an extraterrestrial threat. We are told that humanity won the war with nukes, but lost the use of our home, and now all that’s left is to strip mine the world’s remaining resources for use by off-world colonies.

Our intrepid glamour couple serves as the lonely living support staff for a fleet of robotic drones that zip around the planet, defending the harvesters from attacks by alien stragglers, nicknamed “scavs.” Before their current mission, Jack and Vicca had their memories erased, which is our first tipoff that there’s something wrong with the “official story” being spun by Harper’s satellite-bound overseers.

The other clue, pretty much spoiled in the trailer, is that Morgan Freeman leads a ragtag army of survivors, a la the Matrix, who tell Jack that everything he knows is flat-out wrong.

After a lengthy first half that very gradually doles out revelations, our clueless hero explores the gorgeous ruins of football stadiums, bridges and a remarkably intact Empire State Building. Then Oblivion shifts into action mode, cramming plot twists into a rush of aerial dogfights, shootouts and rising levels of noisy techno calamity.

Once the cat’s out of the bag, the movie becomes not just a matter of sorting out the clues, but collating the endless references, echoes and swipes taken from countless earlier, better sci-fi flicks, including: Independence Day, Moon, Alien, Planet of the Apes, WALL-E, Total Recall, Silent Running and a dozen more.

When we finally do see inside the bad guy’s mothership, it resembles “V’Ger” from the first Star Trek movie, and the alien intelligence itself has a big, glowing red eye that looks exactly like HAL 9000’s.

Whether this is all homage, laziness or a just a form of visual shorthand is as unresolved as some of the dangling plot points. Director Joseph Kosinski’s only previous credit was the visually rich but intellectually bankrupt Tron Legacy; and while this film is a bit more satisfying, it is driven only by its gorgeous visuals.

Increasingly, studios are less concerned with traditional storytelling than with weaving together action set pieces and dazzling imagery for consumption by less demanding overseas audiences, who are already goggling up tickets.

The effects-laden, CGI spectacle Oblivion is just further evidence that the days of box office superstars like Cruise are numbered, which seems lost on the actor himself, who continues to happily buzz around his own decaying orbit.