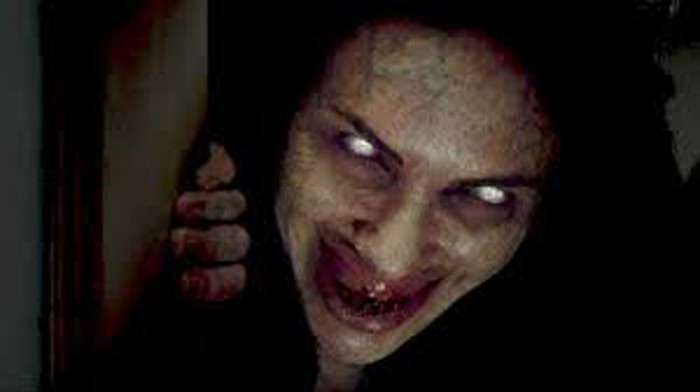 When it comes to movies about haunted household furnishings, director-co-writer-editor Mike Flanagan’s Oculus pretty much sits at the top of the heap. I’m not sure whether that’s actually a compliment; given that this is a horror flick about a malevolent mirror, it’s far better than it has any right to be.

An expansion of a 30-minute short Flanagan made in 2006, we’re introduced to two twentysomething siblings who survived a horrific family tragedy as adolescents. Tim Russell (Brenton Thwaites) has been released from a mental institution into the waiting arms of his sister Kaylie (Karen Gillan), who quickly reminds him of a promise they made as children: to destroy the antique mirror that drove their parents murderously mad. Returning to their childhood home 11 years after the incident, Tim discovers that Kaylie has set up video cameras, computers and various safeguards in order to capture proof that the mirror harbors nefarious powers.

At first, Tim refuses to play along, convinced after years of therapy that the trauma of his parents’ deaths induced elaborate supernatural rationalizations for what happened. Of course, it isn’t long before he’s convinced otherwise … and all Kaylie’s careful precautions and planning are no match for the oculus (which really means “eye” or “circular opening,” but why quibble?), putting their plan — and lives — in jeopardy.

Once the mirror starts messing with the siblings’ minds, Flanagan starts messing with ours. Hopping back and forth in time, we witness Tim and Kaylie’s memories of the mental disintegration of their parents Marie (Katee Sackhoff) and Alan (Rory Cochrane). This parallel story is juxtaposed with the brother-sister team’s present-day hallucinations, escalating toward a double climax. It’s a neat trick, and Flanagan does a terrific job of keeping things tense and off-balance.

Unfortunately, Oculus’ slow burn scripting isn’t as strong as its direction. While there are some genuinely creepy moments and a few jolts, the movie never really scares. Part of the reason is that a bickering, exposition-heavy setup drains half the narrative of any surprises. We pretty much know what happened to Kaylie and Tim’s parents, so watching it unfold in real time comes off as redundant. That leaves the present-day half of the plot to do the heavy lifting. It isn’t up to the task.

Kaylie’s meticulous strategies for dealing with her reflective foe suggest that she’s smart and resourceful — a nice change of character for a supernatural horror flick. But as soon as her safeguards get in the way of Flanagan’s march toward destruction, Kaylie’s behavior becomes less and less convincing. Yes, I get that the mirror is screwing with her head, but there are moments when Kaylie could vanquish her enemy but doesn’t. The most egregious is after she disproves Tim’s Psyche 101 explanations for their violent family history and demonstrates (via video playback) the insidious influence of the mirror. Instead of then destroying their inanimate foe and heading out for a celebratory beer, however, Flanagan keeps the siblings documenting the mirror’s powers because … well, it keeps them in the house long enough to let its powers grow.

And what does the mirror want? What does it gain by manipulating its owners into committing murder and suicide? Oculus offers no real explanations. Flanagan does a good job of evoking a malicious presence from his titular prop, but offers no hint of a motive and no rules for what the mirror can and can’t do. While this might not trouble fright flick fans, the more discriminating viewer may find the deck too easily stacked in favor of the possessed mirror as it plays mind games, produces creepy apparitions and seemingly eats dogs.

While it fails as a metaphor and shortchanges its own mythology, Oculus is slickly shot and occasionally quite gripping. There is a sad darkness that lurks beneath the awkward plotting — a tragic sense that Kaylie and Tim, no matter how well-prepared, are damned. Flanagan’s film may not haunt his audience the way he hoped, but it still finds a way to disturb.

Oculus is rated R, has a running time of 105 minutes, and is in theaters now.