Armageddon outtahere! This ridiculous actioner about a president taken hostage is a ton of big, dumb fun. 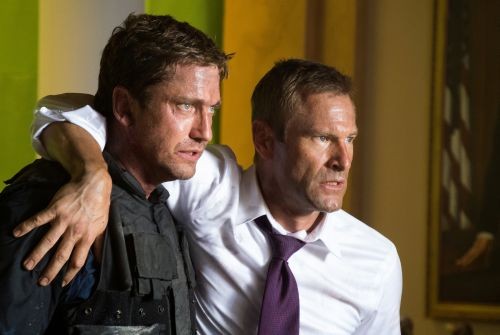 Imagine if you will the simplest pitch session in Hollywood history: “Well, it’s Die Hard, but in the White House.” Sold. In fact, the concept proved so irresistible to execs that a near identical, star-laden D.C.-under-siege movie, White House Down from mega budget schlockmeister Roland Emmerich (Independence Day), will invade multiplexes in the summer. This sort of deadly one-upmanship happens often in Hollywood, though being first doesn’t always ensure success. Just ask the canary.

Gerard Butler struggles mightily to swallow his Scottish brogue (along with his pride) as Mike Banning, an ace Secret Service agent who left the detail guarding the president (Aaron Eckhart) after a horrible accident involving the first family. Our hero is still guilt-ridden, but when a squad of heavily armed terrorists assaults the White House, kidnaps the POTUS and tries to seize control of our nuclear arsenal, Banning is the last man standing, and our only hope to save the world from chaos.

The cliché count is neck-and-neck with the body count in this hyperviolent and cheerfully destructive thriller, and indeed Olympus Has Fallen “borrows” so much from the Bruce Willis back catalogue, and from scores of macho stuff like In the Line of Fire, Air Force One and The Sum of All Fears that you’ll imagine director Antoine Fuqua (Training Day) brought a stack of Blu-Ray’s to work from on the set.

In some ways, bombastic action movies never recovered from the loss of the Soviets as the chief, mustache-twirling adversary, so they have fallen back the go-to current default punching bag for conspiratorial wing nuts: the North Koreans.

As Kang, the merciless leader of the rouge commie paramilitary group out for revenge against America, Rick Yune (The Fast and the Furious) makes an appropriately detestable villain, even if his pursed lips, studiously coiffed hair and preppy outfit make it seem like he’s forever on the verge of breaking into the “Gangnam Style” dance.

The many famous members of this large cast should be rightly embarrassed to have this trash pile in their résumés, none more so than progressive talking head, MSNBC host and camera whore Lawrence O’Donnell, who ought to know better. As the stalwart Speaker of the House, Morgan Freeman appears relieved to not be facing extinction via asteroid, but still somewhat stunned that his hefty financial commitments have led him to this dreck. Melissa Leo seems happy to have a job since nearly crying herself out of the biz after her Oscar win, and here she misses no opportunity to snarl, moan and writhe in agony as the captured Secretary of Defense. The presence of other familiar faces, such as Robert Forster, Angela Bassett, Dylan McDermott and Ashley Judd only add to the ’70s disaster flick vibe; I kept waiting for Peter Graves to pop in for a cameo.

Armed with a stockpile of assault rifles, smoke grenades, knives and cheesy one-liners, Butler gamely plows through waves of baddies, with the sort of patriotic blood-splattered, gung-ho absurdity that the recent Red Dawn remake never quite pulled off. All concerns about believability or logic get shrugged off like mere flesh wounds, as the flick hurtles into another explosive set piece.