This obvious money grab’s story is pasted together from other, better animated films. 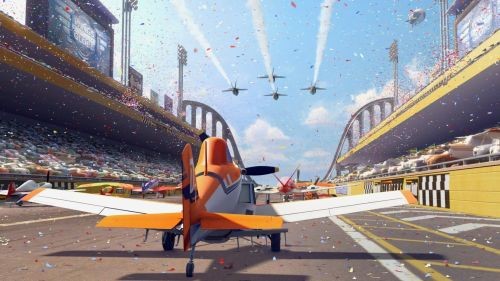 Movies are made for different audiences, and for a host of reasons, and films that please everyone are rare indeed. I tried to keep that in mind while gazing blankly at this colorful, sprightly and utterly vacuous merchandising catalog in animated form. While I was bored beyond comprehension, my little screening buddy next to me sat through much of it with wonderment; his eyes as wide and alert as the huge googly orbs rendered on the anthropomorphic aircraft that kept buzzing by.

Since this is a world populated entirely by sentient machines, you may spend a few moments pondering who the crops our hero is dusting are meant for, but the script helpfully explains that corn makes for tasty jet fuel. In fact, screenwriter Jeffrey M. Howard is quick to provide explanations — along with narrative clichés, technical jargon, racial stereotypes and a goodly number of flatulence gags. Yes, Planes will make you believe machines can toot.

The movie will also make you believe that you’ve seen all this before, especially since the plot points are largely cut and pasted from the storyboards of Cars. It’s not so much homage to that earlier series as it is cheap knock-off — an accounting-driven exercise in brand extension with no real artistic impulses of its own. Though Pixar honcho John Lassiter is billed as the executive producer, this is a purely Disney product, and one originally intended as direct-to-DVD fodder, until someone saw a hole in the theatrical release calendar.

Funnyman Cook is given absolutely nothing funny to say, and even the skilled support staff, including John Cleese, Stacy Keach, Julia Louis Dreyfus and Brad Garrett, only manages to produce a few smiles. There is something lyrical in all this soaring and zipping through the clouds, but Klay Hall directs like he’s got somewhere else to be, and when it comes time to reach higher and create any real emotional connection, this lemon flatly chokes out.

Planes is in theaters now and is rated PG with a running time of 92 minutes.