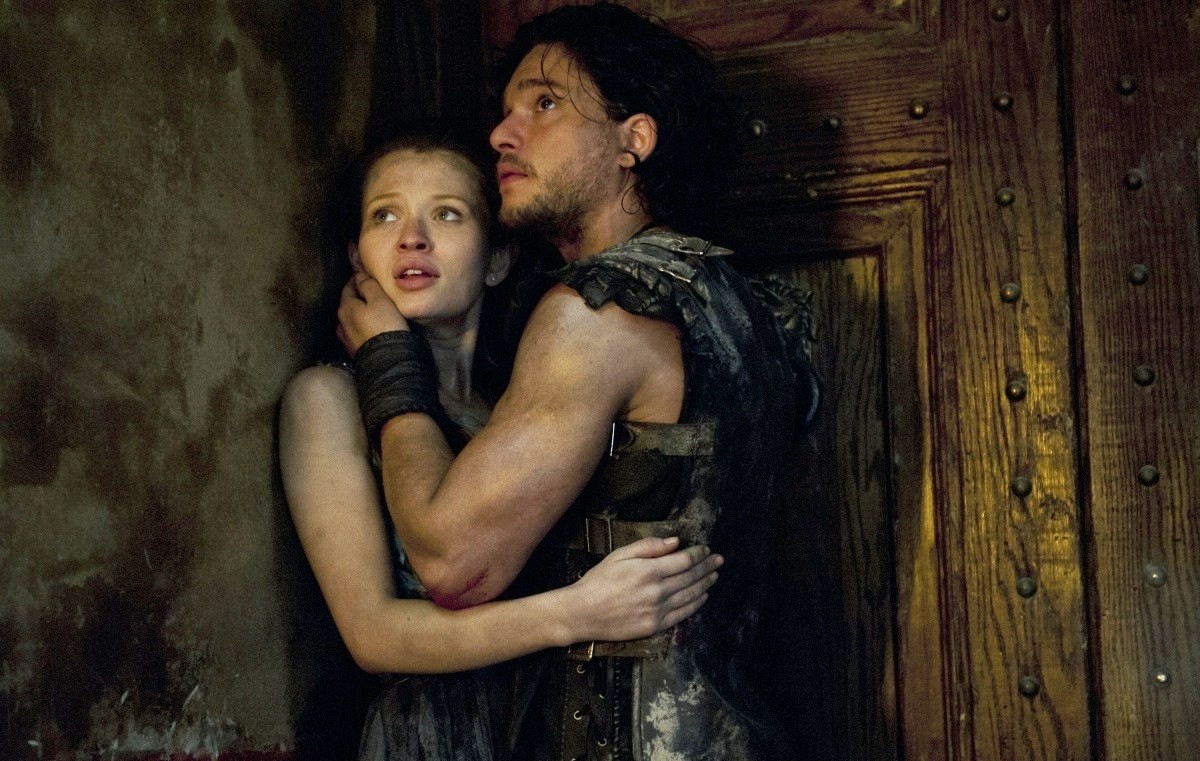 It’s Titanic meets Gladiator, but not as good as either. If you don’t have time to read the rest of the review, that should do you just fine.

For those who can’t help themselves, this marginally competent but crushingly predictable period disaster movie is what you get when you give a work-a-day director like Paul W.S. Anderson (Resident Evil, Death Race, AVP: Aliens Vs. Predators) $100 million and a script by the couple who penned Batman Forever (the one with Val Kilmer).

Pompeii’s plotting is so relentlessly empty of surprise that you can be forgiven if you start reciting the dialogue along with the actors. Its leads are similarly dull, sharing only one pouty facial expression between the two of them. Though, to be fair, Emily Browning (Suckerpunch) and Kit Harington (Game of Thrones) are pretty to look at. And that, if anything, is what Anderson’s film has going for it: It looks better than it is.

Milo (Harington) is the sole survivor of a Celtic horse tribe, which was slaughtered by Roman commander Corvus (Kiefer Sutherland camping it up). Raised as a slave, Milo becomes a chiseled gladiator who’s brought to Pompeii to battle Atticus (Adewale Akinnuoye-Agbaje), an African pugilist one fight away from retirement … er … earning his freedom. It’s fair to say that these men will become buddy-gladiators, like Mel Gibson and Danny Glover in Lethal Weapon — only with swords and stilted English.

Browning is Cassia, the daughter of Pompeii’s leader, Severus (Jared Harris), and his wife Aurelia (Carrie-Anne Moss). Fleeing Rome and the carnal attentions of Corvus, she meets Milo when her horse breaks its leg and the Celt lovingly snaps its neck. It’s a romantic moment for the books.

With Milo headed for the arena and dastardly Corvus arriving to fund a real estate deal with Cassia’s father, the table is set for a forbidden love affair between castes. And then, wouldn’t you know it, the volcano erupts.

This is where Anderson justifies his budget. Extras run around screaming as ash, flaming boulders, and a tsunami consume the city. The 3-D effects shoot soot and debris at our faces, as great plumes of smoke billow from Vesuvius. The chaos and carnage is almost impressive. All it needs is a little Sensurround to make Irwin Allen proud.

There are also horse chases and PG-13 sword fights to fill the gaps. The best involves muscle-bound Milo and Atticus taking on a battalion of Roman soldiers. Fight choreographer Jean Frenette (300) does a top-notch job of concocting an exciting battle. Too bad Anderson’s camera can barely keep up.

Clearly created for the international market with dialogue too simple for subtitles and big-things-go-boom effects, Pompeii’s spectacle occasionally makes you forget just how mediocre it really is. Unfortunately, whenever your brain slips into action-movie-cruise-control, the doomed love story pops back in to ruin the party.