Trilogy continues with another blood-soaked vehicle for Vin Diesel’s scowl. 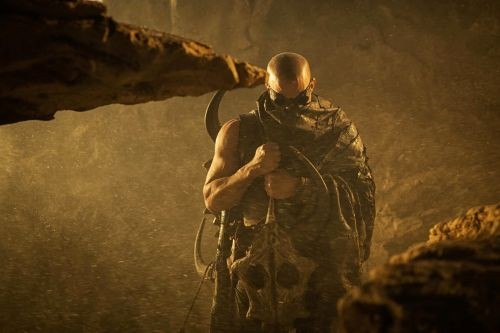 VIN DIESEL, A lumbering action behemoth with all the smoldering charisma of a human-pit bull genetic experiment gone awry, has a hell of a career for a guy whose only discernible talent is scowling. Dude has multiple franchise vehicles to his credit; including this hyper violent sci-fi-and-horror “Pitch Black” saga which has mysteriously been revived after lying dormant for years. The last entry, 2004’s The Chronicles of Riddick, was an overly silly, bloated PG-13 space opera that seriously underwhelmed genre fans and critics. Yet, here we are, once again exposed to the extreme antics of Diesel’s bloodthirsty, nihilistic, night vision-blessed space mercenary; much like a swarm of noisy cicadas, Riddick’s return is unwanted, obnoxious and largely pointless. There is some dumb fun to be had though, as long as you can stomach all the carnage, posturing, plot holes and rivers of excess testosterone.

The action starts abruptly, as our marooned antihero must struggle for survival on a barren, sun-baked alien world where every pond belches sulfur and every overturned rock contains a nasty menace. This unnamed planet that has little in the way of flora, and its fauna consists mainly of ruthless apex predators; this isn’t just a hostile environment — it’s a suicidal one.

After clubbing and strangling his way through hordes of CGI beasties for the first half-hour or so, Riddick is finally joined by other humans, though all of them are gunning for him. Having sent out a distress signal from a rescue beacon, Riddick has instead attracted two competing crews of bounty hunters, one of them so intent on collecting his head that they’ve brought a bucket. Most of them are just meatbags to get splattered one by one. The only interesting one is Katee Sackhoff’s Dahl, who is the sort of scenery-chewing, man-hating badass that is the spirited actress’ trademark. Legions of her Battlestar Galactica fanboys will be delighted to know she’s got a gratuitous nude scene, along with some of the screenplay’s only juicy lines that aren’t spit out of Diesel’s gravelly maw.

Though imaginative plotting is in short supply, the monsters and technology have a pleasingly chunky feel, which befits the burly star. Unfortunately, every frame has been digitally color-corrected within an inch of death, casting almost everything in that sickly palette of orange and blue which has lately become visual shorthand for bombastic action flicks. Of course, bombast is Diesel’s calling card, and the whole enterprise is basically an unconscious parody of the actor’s overinflated machismo. He’s virtually unkillable, lethal and so sexually explosive he can flip a lesbian like a cheese omelet with just a few tasteless boasts.

Every scene is designed to inflate the star’s pumped-up badass image, with the flick being just a highly concentrated smoothie of pure Diesel. And, yes, that’s as gross as it sounds.  mt

Riddick is rated R, with a running time of 119 minutes.