This Ship is Foundering 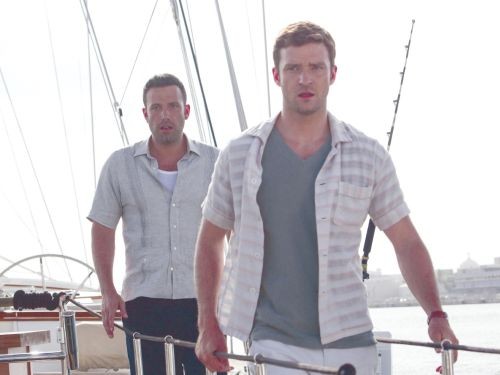 To sum up the movie in a sentence: It’s quick, slick and empty of style or tension. With quick cuts and wobbly hand-held shots, director Brad Furman tries mightily to inject some energy into this torpid online gambling thriller, but the cards are stacked against him.

Writers Brian Koppelman and David Levien, who wrote the screenplays for Rounders and Ocean’s 13, have concocted a seen-it-all-before shell game of bland manipulation and easy-to-spot bluffs that seems like the first draft of a script that could be much better.

Richie Furst (a too-perky and too-old-for-this-role Justin Timberlake) is a Princeton college student who peddles online gaming memberships to fellow students in order to pay his tuition. When he’s swindled out of his life savings during an online poker game, he sets out for Costa Rica to confront Ivan Block (Ben Affleck), the multimillionaire who owns a network of gaming websites. Ivan sees a little bit of himself in Richie and brings him into the operation as a kind of right-hand man.

At first things look great. The money’s good, the women are hot and Richie is living it up in paradise.  Of course, anyone who has seen Wall Street or The Boiler Room — or any of a half-dozen “up-and-comer gets seduced by charismatic father-figure and ends up in over his head” flicks — knows where this is all heading.

Will Richie regain his moral compass? Can our young turk turn the tables on his scheming mentor? Will the hot trophy babe (Gemma Arterton) stay with her sugar daddy — or fall for the hero?

If you’re hoping for a surprise answer to any of those questions, then you are watching the wrong movie. There are a couple of good lines, and Anthony Mackie brings some much-needed energy as a ruthless FBI agent with a hard-on for Block, but the movie is mostly a dull and formulaic affair.

Cinematographer Mauro Fiore (Avatar), gives everything a glossy, travel-brochure look, while director Furman (The Lincoln Lawyer) frantically moves the cardboard cutout players around his indistinct Puerto Rico locations. It’s watchable, but not enough to compensate for a storyline and characters that have no pulse.

Some may wonder if Affleck’s turn as criminal kingpin hints at what kind of brooding intensity he’ll bring to Batman vs. Superman, since he’s to play the Dark Knight; sadly, Runner Runner offers no real clues. Here he’s his affable yet smarmy self, the kind of laid-back nice guy who casually throws his enemies to the crocodiles every now and then. And much like the movie, he neither embarrasses nor distinguishes himself.

Runner Runner is in theaters now and is rated R with a running time of 91 minutes.