Being big. Johnson shows range in a film that’s not as big, dumb and loud as usual 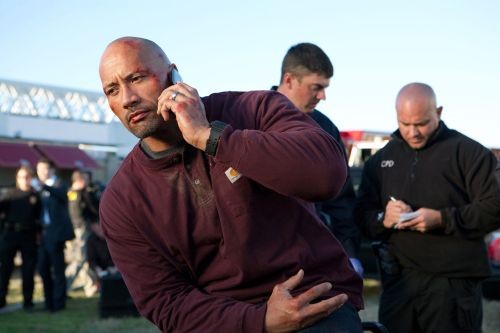 Dwayne (don’t call him “the Rock” anymore) Johnson is really a better actor then his résumé might suggest, and, no, I’m not trying to pull your leg. Johnson did get his start literally pulling people’s legs, as a cartoonish pro wrestling super star, and his movie career has mostly been an exercise in rounding off his flashier edges, while maximizing his imposing physicality and easy charisma. In Hollywood, Johnson has mostly been treated as big old slab of action hero beef, the inheritor to the throne of King Arnold, which has meant everything from barbarian movies to sci-fi tent poles to horrific “comedies” where the big dumb tough guy is forced to dress up like the tooth fairy. Despite diminishing returns, Johnson keeps getting cast due to a dearth of bankable action stars younger than 60, and because the guy himself is just simply more likable than the scripts he gets saddled with.

While the marketing campaign seems to be casting this one in the same mold as most of the star’s bombastic action movie catalogue, aside from a few brief shootouts and one big, climactic vehicle chase, Snitch is something different. What we really have here is a family drama and crime thriller hybrid that forces Johnson to flex a new set of muscles.

His acting chops get a mild workout as hardworking contractor John Matthews, who has built his construction company into a success through old-fashioned sweat equity. He’s the kind of humble boss who stops to help unload a pallet of concrete bags when he spots an employee putting in a bit of extra hustle. That employee is an ex-con gone legit named Daniel, played by tough guy actor Jon Bernthal formerly of AMC’s The Walking Dead, and he soon becomes vital to the action, when John’s teen son (Rafi Grafon) from a previous marriage gets caught handling a package for a drug dealer pal. Due to draconian sentencing guidelines, the kid is facing hard time, until his desperate father works out a deal with the hardass federal prosecutor (Susan Sarandon). If Matthews manages to bring in usable evidence on a major criminal player, the feds will release his son, and clear his record. So you’ve got a suburban dad going deep undercover into a ruthless drug cartel, and going in way, way over his head, which is hard to do, because the hulking Johnson’s skull is already scraping the ceiling.

Though allegedly based on “real events”, the plot gets bogged down in increasingly implausible scenarios and dry, talky exchanges, until the exciting final car chase and shootout, which involves an 18-wheeler flipping over and a car exploding for no good reason. The movie is mostly serious, maybe a little too somber for its own good, and the attempts to generate Training Day-style tension are hampered by the PG-13 rating. Dwayne Johnson might not be hanging up his tights or gun belt anytime soon (he’s in the upcoming G.I Joe sequel), but he has demonstrated that there could more out there for him, even if this merely adequate caper doesn’t quite provide the dramatic smackdown he’s looking to land.