Story of Jesus manages to make Mel Gibson look like a genius. 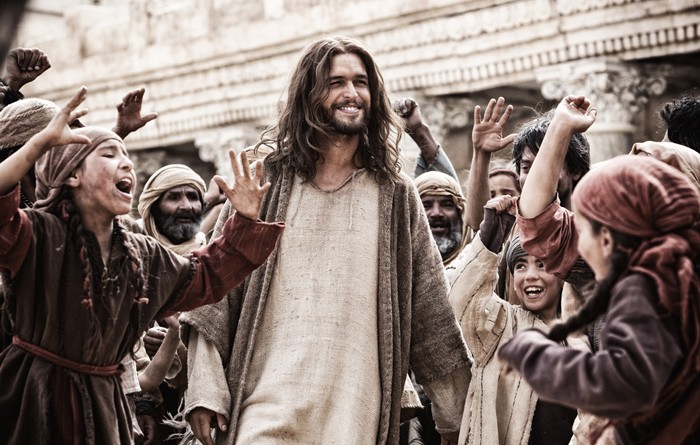 I could never be described as being “without sin,” but, as a film critic, casting stones is kind of my thing, so forgive me for what I must now say; Son of God is a truly dismal experience, as torturously boring as a month of Sunday school lessons.

Footage from last year’s boob tube mega-hit The Bible is offered here as a repackaged feature, with a few sequences added and expanded, and some, like the notorious Satan that looks suspiciously like President Obama, smartly left in the editing bay. Even with the cuts, this recounting of Jesus’ life and times feels like an overly long and tedious exercise in clock-watching.

Skipping the nativity, the movie jumps right into Christ’s ministry years, as he gradually assembles his flock of apostles, whips up a few miracles, and begins to draw the attention of the local authorities. Even unwashed heathens will be familiar with the basic outline here, and the filmmakers have assembled the story into a bit of a greatest hits package: first the bit with the multitudes of fish, then the donkey ride, the sermon on the mount, the turning over of the moneylenders’ tables, the last supper, the Romans — you know the drill.

Through it all, the pleasantly handsome, vacant-eyed Diogo Morgado strolls around randomly dropping catch phrases like “Turn the other cheek,” etc., looking like the beatific, dusty portrait hanging on the back wall of a barber shop. The apostles are played by no one you’ve ever heard of, and with good reason — none of them leave any sort of lasting impression at all. The only familiar face is former Touched by an Angel star Roma Downey, who is the wife of reality show kingpin Mark Burnett, who also happens to be one of the producers on the series. This is a passion (pun intended) project for them, though one that is curiously free of any detectable enthusiasm or energy. As bat-shit insane and unseemly as Mel Gibson’s famed take on the same subject was, at least that film had the conviction of a true believer, one committed to capturing the latent emotion of the scripture. Here, everything is tastefully restrained, and about as colorful as the abundant sand. I kept waiting for somebody to start belting out a tune, as in the wonderfully absurd Jesus Christ Superstar, but alas, not.

Son of God is as good as any film edited together from segments of a History Channel miniseries can be expected to be, which is to say it’s utterly terrible. The direction, the acting, the writing, and even the CGI flyovers are all routine, lifeless hackwork, but it scarcely matters. This thing was already a major success, and arrives in theaters with a built-in devout following that will crowd the Sunday matinees regardless of any warning scrawled on the walls. Save us.